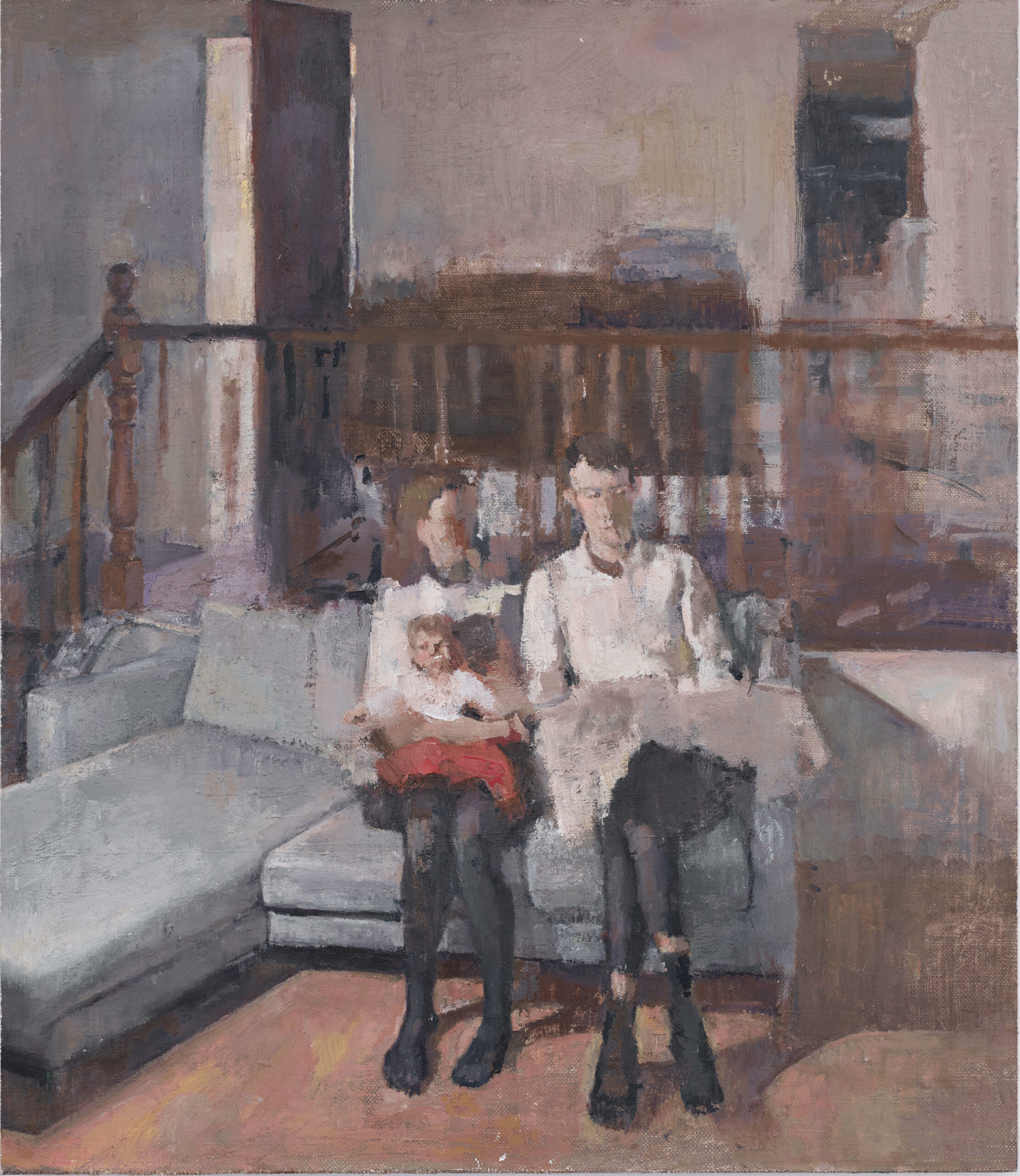 Joshua Press’s debut solo exhibition – Different Bodies – is an intimate celebration of family and friends. 1883 meets the artist known for his intense, hazy portraits to discuss his work and ask why portraiture will never go out of fashion.

In an age marked by the globalisation of digital imagery, one might wonder whether painted portraits are still relevant. The advancement and ongoing democratisation of technology have put a camera in everyone’s hand. Our social media feeds are flooded with pictures of celebrities and everyday people, friends and acquaintances. So why does the art of portraiture continue to matter today? The answer is perhaps to be found by reflecting on what its true function is.

If portraiture was just about capturing the photographic likeness of its subject, painted portraits would have gone out of fashion a good two hundred years ago. The invention of photography revolutionised our relationship to reality and its representation, but did not displace paintings. Painting portraits has never just been about producing a likeness, even when verisimilitude is the artist’s main preoccupation. The enduring relevance of the genre lies in its capacity to go beyond the function of recording an individual’s appearance. The aim is to reveal and convey the nuanced complexity of the subject’s identity to offer an insight into their psychology and personality. And this is something that cannot be achieved through technology alone.

33-year-old London-based Joshua Press has developed a unique talent for conveying his subjects’ character.
A figurative painter whose style leans toward Post Impressionism, Press has become known for his hazy, rarefied portraits characterised by expressive and textured brush strokes that reflect the artist’s personal exploration and elaboration of pure form.

Painting strictly from observation, Press plays with light and colour to produce delicate, unsaturated compositions of rare intensity and beauty. His most recent body of work will be on display at 139 Whitfield Street, London, from 5th to 10th October. With the only exception being two exquisite self portraits, one of which is inspired by Pompeian frescoes, Joshua Press’s debut solo exhibition, titled Different Bodies, brings together portraits of close friends and family created over the past three years at the artist’s studio in North London.

While reminding us there is more to portraiture than plain verisimilitude, Different Bodies conjures a profound sense of intimacy and duration, one that reveals as much about the artist, his intentions and creative process, as it does about the sitters and their inherent truth.

We met Joshua Press ahead of the opening of his exhibition to discuss his work, influences and ask why painted portraits still matter.

Hello Joshua, thank you for finding time for 1883 Magazine. When did your interest in painting and portraiture in particular first begin?

I distinctly remember encountering the works of British figurative artists such as Auerbach, Freud, and Henry Moore early on into my teenage years and feeling an affinity towards their work. A genuine excitement which stirred something of a frenzy up inside of me.

Auerbach’s heads in particular, portrayed a visceral search for some sort of synchronicity and an exactitude of feeling. That although not always entirely conveying a conventional likeness. They have a palpable truth about them.

What artists would you say have influenced you the most? I believe you named Walter Sickert as one of your early influences in the past. Is he still on the top of your personal list of favourite artists?

My list of inspiration has grown very long. I’m one of those people whose head is constantly in art books, and I spend a lot of time in museums. I once read that Degas narrowed his primary influences down to three painters, ‘Daumier, Ingres and Delacroix’.

If I could shorten my list to three. It would currently be Degas, Cézanne and Coldstream. Truthfully, this list changes week to week, usually in relation to what I’m struggling with. Sickert has remained a major influence. It was after seeing his show at the Courtauld when I was around eighteen, that I fully committed to painting and drawing. Later I came across his writings on Art. Which are also astonishingly good. Joshua Press, Isabel in the Kitchen, 2020

Tell us about your new series of work, Different Bodies. Why this title?

Different Bodies is a project I’ve been working on for close to three years. It consists of 12 paintings, and various drawings that I made soon after returning home after some years of study. They are figures in an interior setting and portraits of close friends and family painted from observation in the various rooms of my flat. 5 in the kitchen, which has a very nice north light!

The title came to me when I first was a student in France. I read a translation of Ovid’s Metamorphosis. I memorised the first few passages. The opening line was: ‘Now I am ready to tell how bodies are changed. Into different bodies’. The first few stanzas evoked something magic about the creative process, and the power of metaphor.

I think when painting from life, it’s important to remember that your work can only ever be a painted equivalent of what you’re seeing. I’ve found that to be an important distinction. The open potential of several strokes of paint to resemble something of our shared visual reality excites me. Therefore, the title ‘different bodies’ symbolises something essential about my creative process, particularly those first few notes that you make when starting a painting.

A more plain interpretation of the title could be that there were quite a few sitters involved in the making of these works, hence Different Bodies.

The first time we met, you were working on The Camden Town Poster Studies. Whereas your earlier portraits were deliberately hazy, with sitters having no countenance, in your new work you seem to have embraced a more realistic style of painting. What prompted the change?

There still are quite a few hazy heads amongst the works! Despite there being more ‘reality’ in these paintings. That way of seeing, finding several brush strokes to create a painted equivalent for what’s in front of me, is still very much at the heart of what I’m doing. A lot of the works start off in a similar vein to those Camden heads.

The most challenging thing when painting from life, is seeing the bigger picture. Not getting caught up in the details or falling in the trap of painting your symbols of ‘an eye’ or ‘a face’ of ‘light’ or anything really. Not long before the Camden project, I was starting to get to grip with those ideas. In many ways, those paintings were a byproduct of my enthusiasm for discovering those painterly truths. They were the seeds of these paintings. And likely, my future paintings too.

I’ve always been drawn towards figuration. There’s this quote from Giorgio Morandi, ‘I believe nothing is more abstract, more unreal than what we actually see’. I’ve found that to ring very true. There are a few self-portraits in the series. It’s quite an exciting moment when you’re painting yourself in the mirror and you’re shocked by your own reflection. That’s a sign that it’s going well.

So to answer your question, with another one ‘What is reality?!’ I think that’s what I’m trying to get at with painting right now and painting back then too. And even more importantly than that. What is the most beautiful interpretation of reality? Why, in your view, do painted portraits remain relevant in today’s digital age?

I believe that portraiture and painting figuratively distinguish themselves from the digital as they belong more to the realm of metaphor than the mechanical or literal. A painting of a ‘person’ is explicitly a non-literal pursuit. As much it may aspire to mechanics and accuracy, the outcome is undeniably all too human and inimitable.

A good painting of a head, as strong as its likeness maybe, is never really of a person. It reflects ideas of poetics, of geometry and of ‘seeing’ itself. It aspires more to ‘truth’ than likeness. The really good ones can punch a hole in you, and that’s why we keep looking at them, and probably always will.

Sometimes I feel like a heretic for believing this. However, I feel that there’s a magic that occurs when trying to make a work of Art after what you have seen. It’s the antithesis of taking a selfie or an i-Phone piccy. It can be an awkward and painstaking process, but when things snap into being on your surface, sparks fly. It’s almost a tangible sensation. Beauty is a mystery, and it draws us in.

As a final question, what does the future hold in store for you?

More painting! Still life is on the horizon. Big figurative paintings. (These recent works are on the smaller side.) Landscapes too. More reality, less reality. More beautiful and truthful equivalents for reality, hopefully.

Different Bodies is on display at 139 Whitfield Street, London, from 5th to 10th October 2021. 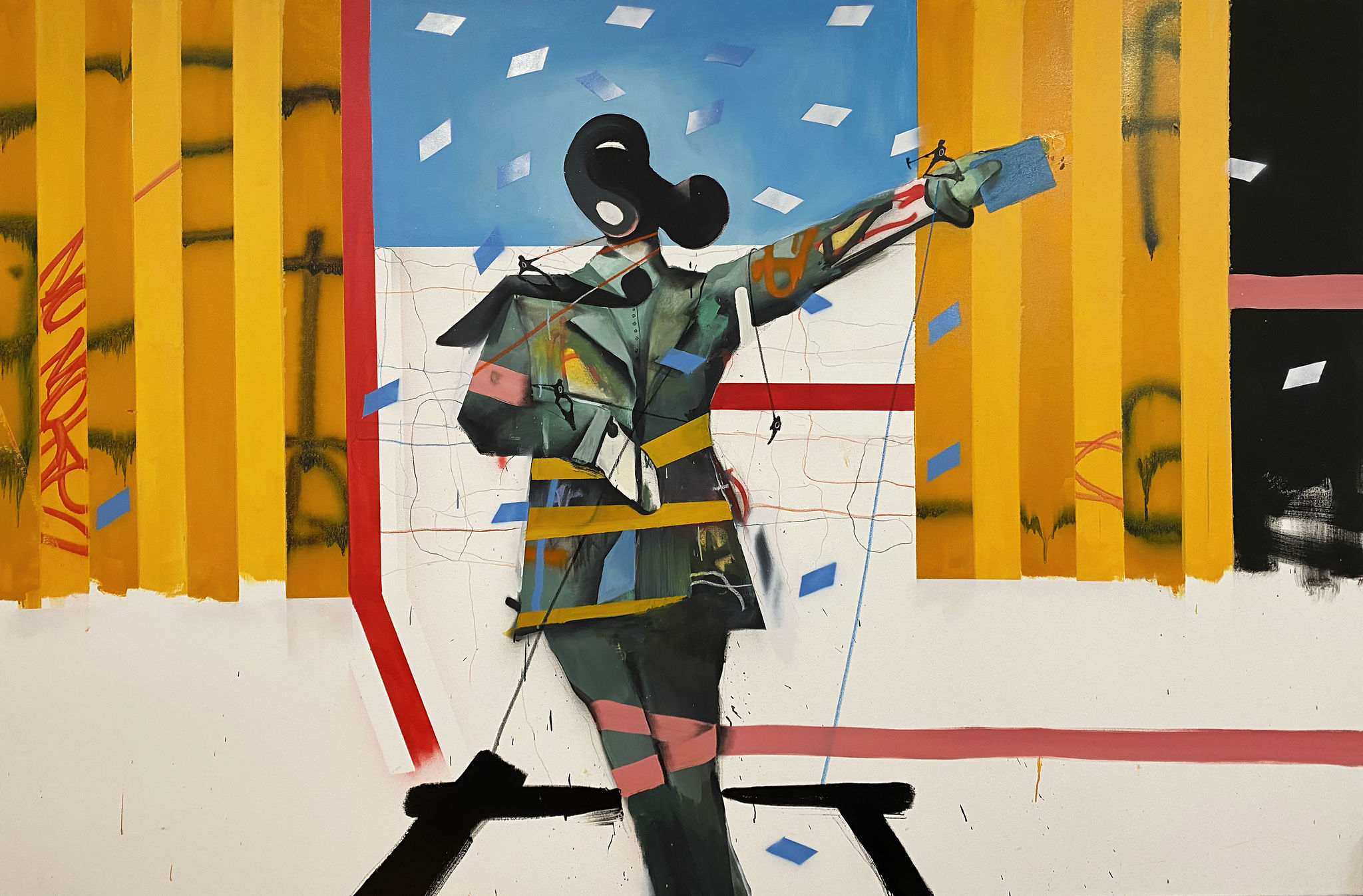 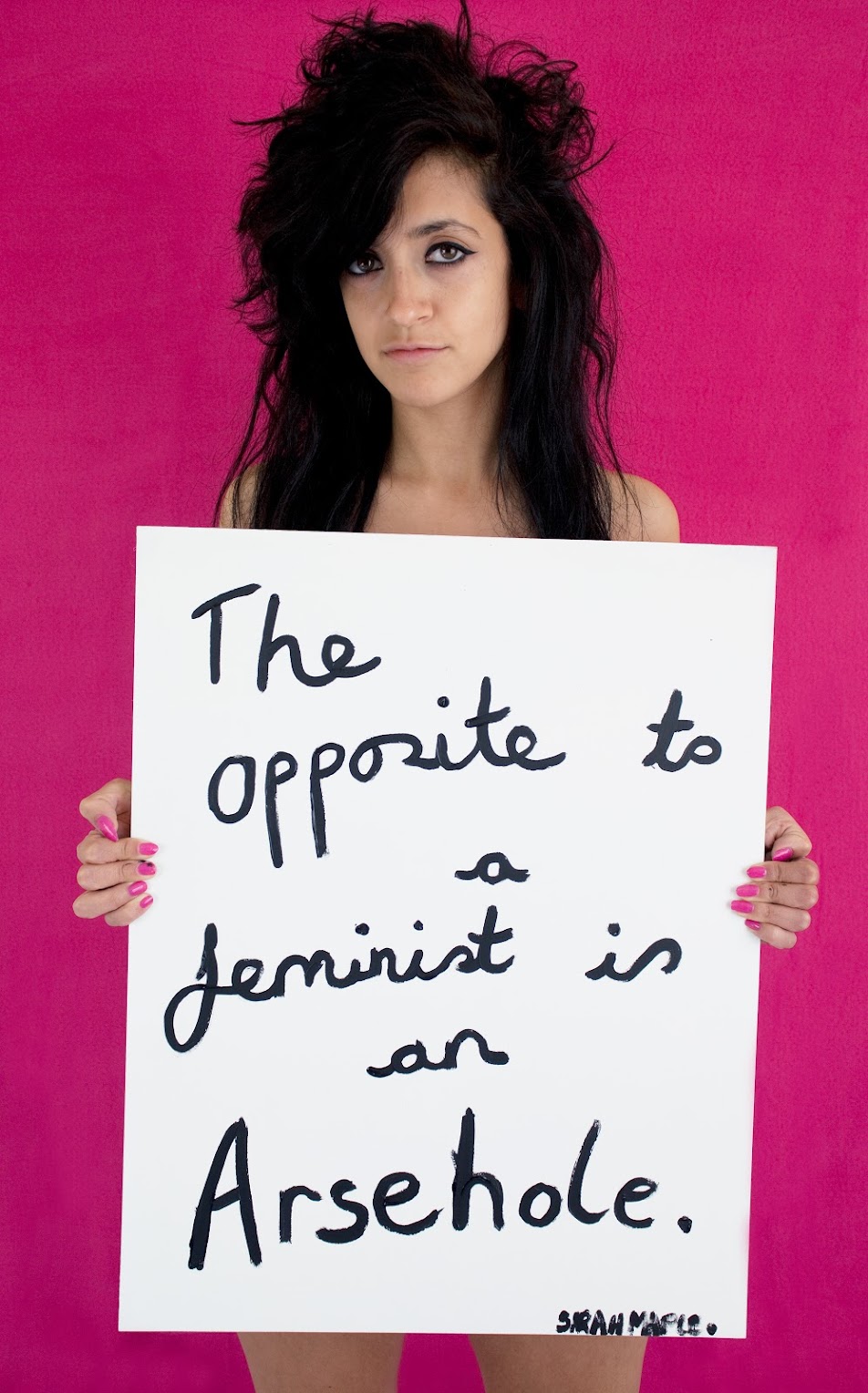 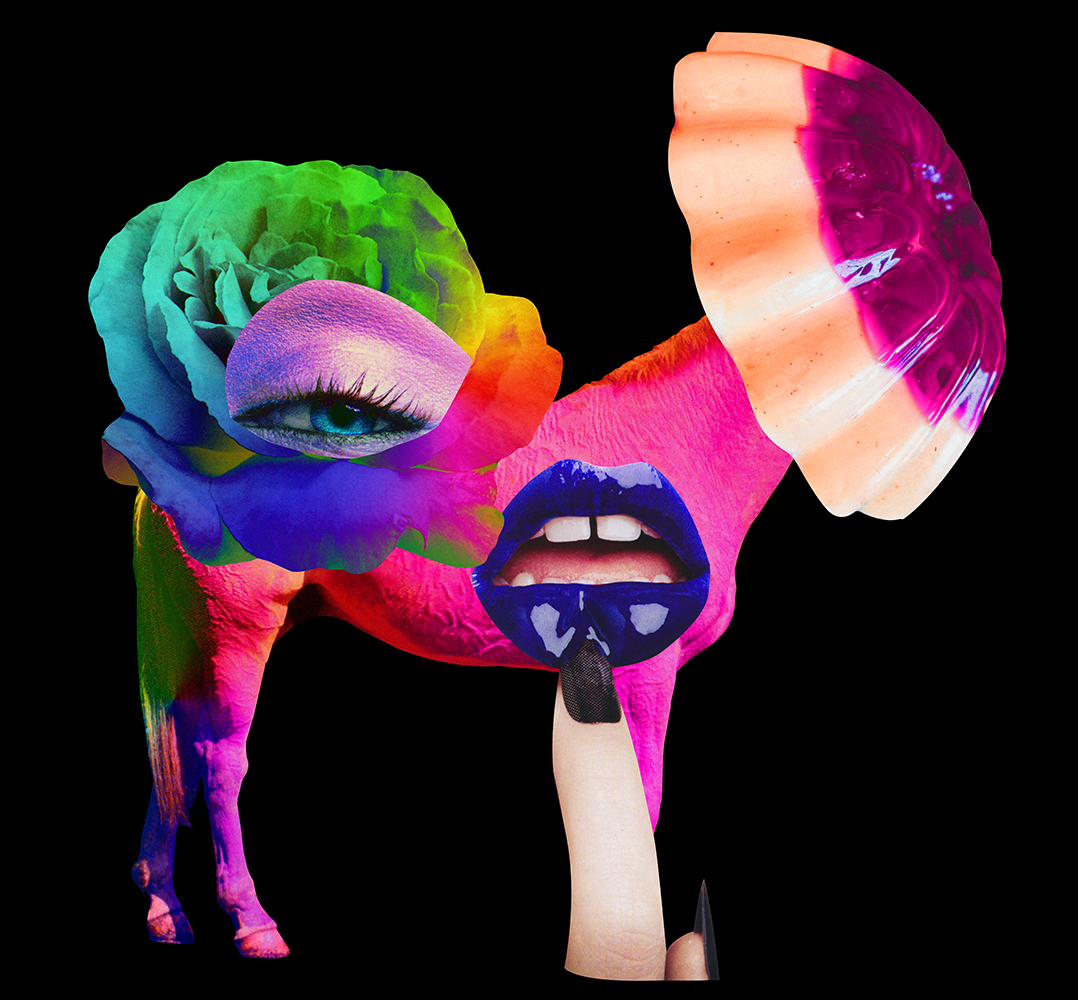