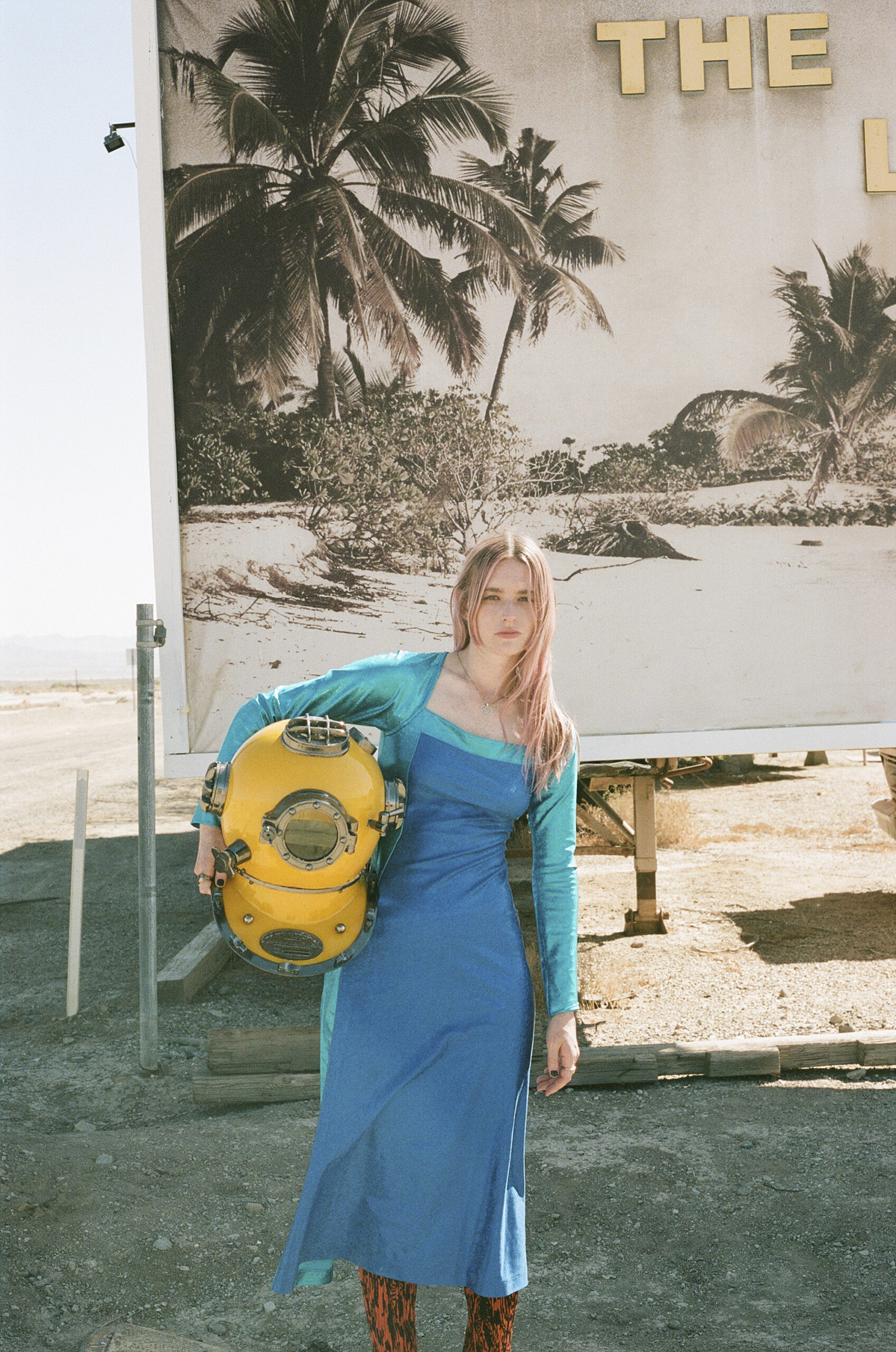 With a punchy synth-like beat and ironically intense lyrics Number One Popstar aka Kate Hollowell of Slut Island notoriety is off on a solo venture of her own.

Her tongue-in-cheek lead single, ‘Psycho’, is accompanied by an equally as rapturous music video, transporting viewers to a suspiciously empty suburban utopia-like hell in which all things are as they should be, except for Kate, the lone leotard-clad dancing figure.

The video looks to mainly be shot in one continuous take, with a few cuts towards the end, and includes a dramatic dance routine on a hoverboard and a few dead-eyed stares from the heart-shaped eyepatch clad singer. ‘Psycho’ is a work of art in itself with some seriously concerning lyrics; the song and video lean more towards a horror movie-esque setting and less of the live-action glamour and pizzaz that we’re used to seeing in today’s videos. The visual works well with the song as Kate aka Number One Popstar proudly sings about going through her supposed lover’s phone and stalking their location.

This Number One Popstar talks to 1883 about her writing process, shooting the video, and her next move.

What inspired this particular work and your new venture as a solo artist?

I’m addicted to performing live music as an outlet, so when the entire world had to be quarantined, I decided to fully commit. I live with my boyfriend who is a musician and producer and we just started making songs. The rest is billboard history, as they say!

How would you say ‘Psycho’ and this new project is different from your much-loved punk band Slut Island?

This is definitely heavily pop-influenced, albeit indie and has a much more danceable sound. I wanted to make alt-pop music with a slight comedic undertone that you’d actually want to dance to. How was it shooting the music video? What did you hope to express with this song and the accompanying visuals?

I basically looked for the most depressing suburban hell I could find, an area that felt like if you had to live there you would fall into the void of the mundane and never return. I wanted to convey a surrealness like it was a set. Because of COVID restrictions, I just shot it with myself, the DP and a driver. Having directed a bunch of music videos before, I originally had big plans but eventually came to the conclusion it was better to keep it simple and do a one take. Everyone kept asking where the shot list was, where the creative brief was, what the choreography was going to be. I guess it was all in my head… In the end, we basically got it in one shot.

How did you prepare for the video shooting process? It seems so simple on-screen, but I’m sure it took a lot of work…

Honestly, you are right, it really was simple. I come from a dance background and at that point had heard the song so much through the mixing process I knew exactly how I wanted to build these small restrained movements and eventually move into more insane free dancing.

The lyrics for ‘Psycho’ are funny, intense, and ironic; what was it like getting into the studio and recording?

We basically turned our home into a 24/7 recording studio during quarantine. The entire process for this particular song was really cathartic. I was witnessing a lot of toxic behaviors in relationships and friendships during that time and felt very inspired to write about how relationships can sometimes bring out the worst in us.

You’re a wonderfully talented photographer as well. Who have you worked with and what has been your favorite experience thus far?

Wow, thank you! Well, I’ve worked with this incredible magazine called 1883 — have you heard of them? Honestly, I love performing and it was fun being on the other side of the camera this time.

You’re a director as well… what’s it like and how do you handle wearing so many hats?

During quarantine, I realized that wearing so many hats was a huge advantage. Not only could I shoot the content myself, I could direct the music video and rally an amazing DP whom I worked with on bigger projects. To me, the music video is the ultimate culmination and expression of everything I love to do. Where did you come up with the artist name of your new solo project? What were the other options aside from Number One Popstar?

I wanted to be number one and I didn’t want to have to wait! But sincerely it was the perfect name that people would immediately be intrigued and confused by and even possibly make them angry until they saw the project and understood what I’m actually doing. Number One Popstar, also known as N1PS, is the only name I ever considered. Feels good to be on top!

The music video should feel like a journey into my brain as the character I’m playing — this kind of accidentally comedic, intense, psychotic person obsessed with following the movements of someone else [the camera]. By the end, I hope you are impressed that I didn’t fall off the hoverboard.

Did you take any inspiration from Daryl Hannah’s character California Mountain Snake from Kill Bill?

Subconsciously I must have because I didn’t make the connection until after and then realized how perfect that was.

You’re always looking to do these incredible creative projects. How do you stay inspired and what can we expect next from you? If you can share details, what’s your next video concept in the works?

I have a short film [Are They Smiling?] I directed and acted in which is now on NoBudge that’s based loosely around my real life. I stay inspired by constantly stepping outside of my comfort zone; if something scares the shit out of me, I will find a way to do it. It’s the only way to grow and stay inspired as an artist. The next music video for Number One Popstar will be a lot more elaborate. That’s all I can say for now. 🙂

Check out Number One Popstar’s music video for ‘Psycho’ below!