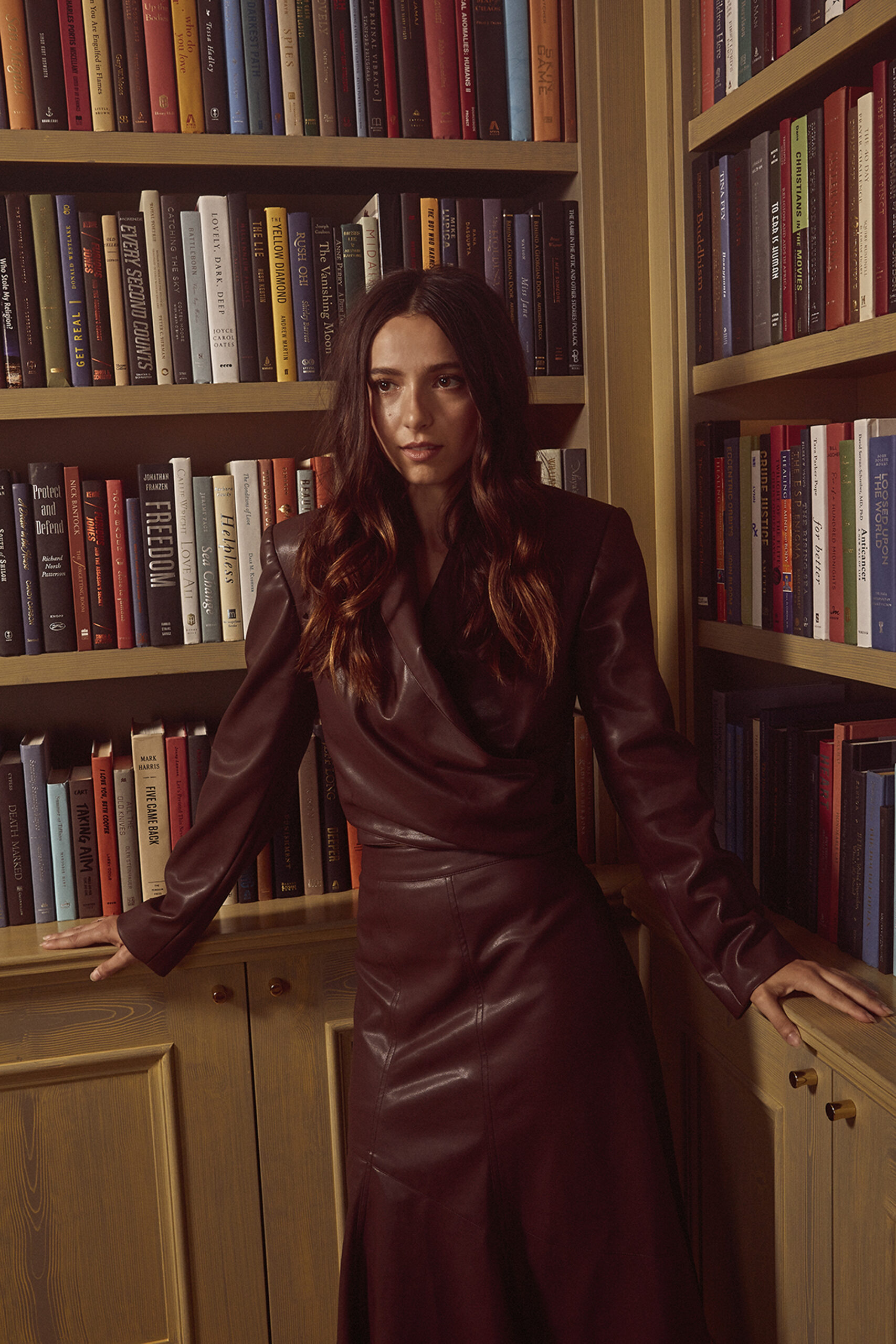 Actress and dancer Anjelica Bette Fellini is a symbol of how far passion and perseverance can take you if you let it.

Relentlessly pursuing her dreams of acting backed by the confidence of technical knowledge and natural expressiveness, Fellini knocked on many doors learning to advocate for herself to get where she wanted to be.

Speaking of her ongoing journey of learning and evolving as an actress, Fellini traces her story from wanting to fit the mould of a delicate dancer to discovering and honing her strengths in expression as she delves into her role of Blair Wesley in Kathleen Jordan’s latest comedy series Teenage Bounty Hunters.

Revolving around sixteen-year-old fraternal twin sisters, Blair and Sterling [portrayed by Maddie Phillips], who team up with veteran bounty hunter Bowser Jenkins [portrayed by Kadeem Hardison], this Netflix series is the next step in the story of Fellini’s blooming career.

In conversation with 1883, the 25-year-old actress dives into her character’s arc, her personal growth as a creative, her transition from stage to TV and films and much more.

Your most notable role before Teenage Bounty Hunters was in superhero drama The Gifted. Bounty Hunter falls into a similar ‘fighting crime, catching bad guys’ category. Are you naturally attracted to such roles?

I think those kinds of roles are attracted to me. I’ve auditioned for plenty of non-action, indie films I would have loved to be a part of, but these action roles just fall into my lap. It might be because I’m a dancer. I remember during my audition for The Gifted, I was able to choreograph this whole action sequence. I think my background as a dancer gives my body a quality that makes such things more believable when I do them. I guess being physical just comes naturally to me.

What can you tell us about your character Blair’s arc and growth in the show?

Blair is connected to her sister in an unspoken way, but she feels a bit ostracized by her parents and school. She feels like she doesn’t fit in; I spoke about this to the showrunner mid-season. You don’t see Blair interact with anyone in the school; she’s never texting anyone except Miles [portrayed by Myles Evans]. It kept her stunted, but in the final episodes, she learns more about her worth, about why she’s treated a certain way and that her family had more faith in her than she thought. She’s also fallen in love for the first time; for her, this is because she’s getting the attention from outside her family. Her arc sees her learning to love herself a bit more and not expect validation from the world. Your character Blair is described as ‘outspoken, opinionated and non-conformist’. To what extent do your personality traits align with Blair’s?

When you describe Blair in adjectives and on paper, yes traits like ‘loud, opinionated and dramatic’ are definitely words people use to describe me. The differences are also very prevalent. She’s excitable and lives in the moment, but I tend to have my head about me a little bit. I read a quote from Meryl Streep, ‘All characters I touch are a part of me. I don’t think I can separate them from myself.’ That’s how I feel about Blair; we are certainly not the same but at the same time, I can’t nitpick and separate our traits.

Did you add anything to the character that wasn’t in the script, but instead from your own observations and understanding of the character?

I brought a lot of myself into Blair. I actually had something in my own life fall in tandem with the character’s story in the show; I had a breakup around the same time Blair had a breakup. Sometimes I don’t think that’s a coincidence. In the original perception of Blair’s character, they described her as this Kat Dennings cool girl, but to me what makes Kat Dennings so special is that she draws you in with her characters and allows you to empathize with them. The character outline for Blair in auditions was this unbothered girl who wore Dr. Martens and listened to Nine Inch Nails, and she’s not like that at all. In fact, her energy is always going outwards, begging the viewer to come closer. I think I brought that to Blair; her energy was light and uplifting, her interests don’t define her personality.

What was the most challenging part of getting into the mindset of a ‘16-year-old, fraternal twin, bounty hunter’?

Actually, it was pretty easy and almost therapeutic for me. I couldn’t have played a 16-year-old like Blair until I was this age. I couldn’t have been 16 and played this character. I was very scared and bothered by what people thought, very much trying to fit in. As a 20-something going back to that mindset — knowing what I know now — it’s like being able to tell my younger self to be yourself, to be kinder and understanding. Playing the fraternal twin was really nice because Maddie and I are both only children. The dynamic came so easily to us; we really could understand each other with just a look on set.

What are your funniest memories from filming the show?

There were a lot. One time, Maddie tripped and fell; that was hilarious. In episode three, Maddie pulls up to this tank of propane. We were rolling and I remember going ‘brake, Maddie, brake!’; if she’d hit the gas, we might have gone over the cement block at the curb and hit the propane. It was scary when it happened but by the next day, we were crying with laughter about it. Moving away from the show, you’ve previously spoken in your Backstage essay about how everyone’s journey to achieving their dreams is different but the common thread is that they know their strengths. What are your strengths and what was your journey to discovering them?

It relates back to that action roles question from before. I had to accept my looks, first of all. Sometimes I get a script, and I think I want this role so badly. But once I read it a few times, I need to consider if I’m what they are going for. Unfortunately, this job is very look-based and so I’ve learned to consider all these aspects. When I was doing ballet, everything was quiet and buttoned-up which didn’t exactly suit my personality. But I remember our teacher wanted us to do improv for Giselle which is a popular ballet. I felt like I’d never be cast as Giselle because she’s like this dainty whisper. All these friends of mine who were dainty ballet dancers found it hard to speak during the improv but for some reason when I did it, I had everyone weeping and breaking into applause saying ‘Anjelica, you should be an actor!’ That was my first realisation of my ability to be expressive with my voice and face was one of my strengths. Once I realised this, I focused on expanding this strength rather than trying to force my body to be dainty and expressive.

Even as an actress, my dream was things like Law & Order: SVU, but I ended up getting something much more of a blessing which was The Gifted. This is what I meant by knocking on doors in the Backstage essay; I knew that when I was ready to do it equipped with the right skills, at least one door would open and it did.

I also love this quote from you, ‘No doesn’t mean it’s a dead-end, just that it wasn’t your street.’ What has rejection taught you about yourself, and how did it push you to find the right street?

Rejection taught me to keep going. You get told ‘no’ many times and I’m sure I’ll continue to get told ‘no’. It took me a really long time to know that the pieces of the puzzle aren’t in my control. After I booked and shot The French Dispatch, I thought ‘I worked in a Wes Anderson movie! Am I going to work now?’ and then I went six months without getting another job. It taught me to dive deeper. Every time I didn’t book a job, I decided to delve into the character more and be more present with the next character I auditioned for than I was in the previous one. What I like to do is save my notes in case I get a callback; I’ll try to write journal pages as my character, both prior to getting a callback and after as well. In this business, rejection is something you can’t avoid; everyone gets rejected.

I loved writing the Backstage essay because I thought to myself what I could have said to myself while I had no auditions, agent or manager. I realised that you are your own advocate. I only got what I got because I advocated for myself; I pitched myself and contacted agents myself. Take classes from the casting directors you admire, drop off your headshots, advocate for yourself. From each medium, whether Broadway to TV or TV to film, what was the most unexpected adjustment you had to make as part of your transition between each form of acting?

For me, being a musical theatre girl was more challenging than TV or film. I used to dread auditioning for theatre. I was in The Phantom of the Opera on Broadway and got to live my delicate ballet dancer dream but after that, I was so shaky and scared. The first time I ever did an in-person acting audition, I was so relaxed. I think I was just in the wrong platform as a dancer. I wanted to be a quiet ballet dancer and bending myself in that direction, but it wasn’t the right thing for me. Once I found acting and sunk my teeth into it, I knew it was the path for me. So, theatre and dance were like trying to fit a square peg into a round hole; once I was past that, I became relaxed.

Now that you’ve found your path, what’s something you’d like to do going forward?

I do have a pipe dream of returning to theatre, but after succeeding in TV and film. I also have a dream of doing a musical biopic, putting on someone else’s skin would be a testament of acting skills. I’d love to do a period piece like Death on the Nile or Emma someday as well. I’m very open to taking on anything I can, and I’m excited about it all.

Finally, what’s been the most memorable moment of your career so far?

I can’t pick between Wes Anderson and Teenage Bounty Hunters. I got representation that made me want to prove myself and within the first week of that, I booked Wes Anderson. That happened back-to-back, and I walked around so awed like ‘did that really happen?’ With Teenage Bounty Hunters as well, I knew it was the beginning for me; a bud that’s blooming so both of these were super memorable.