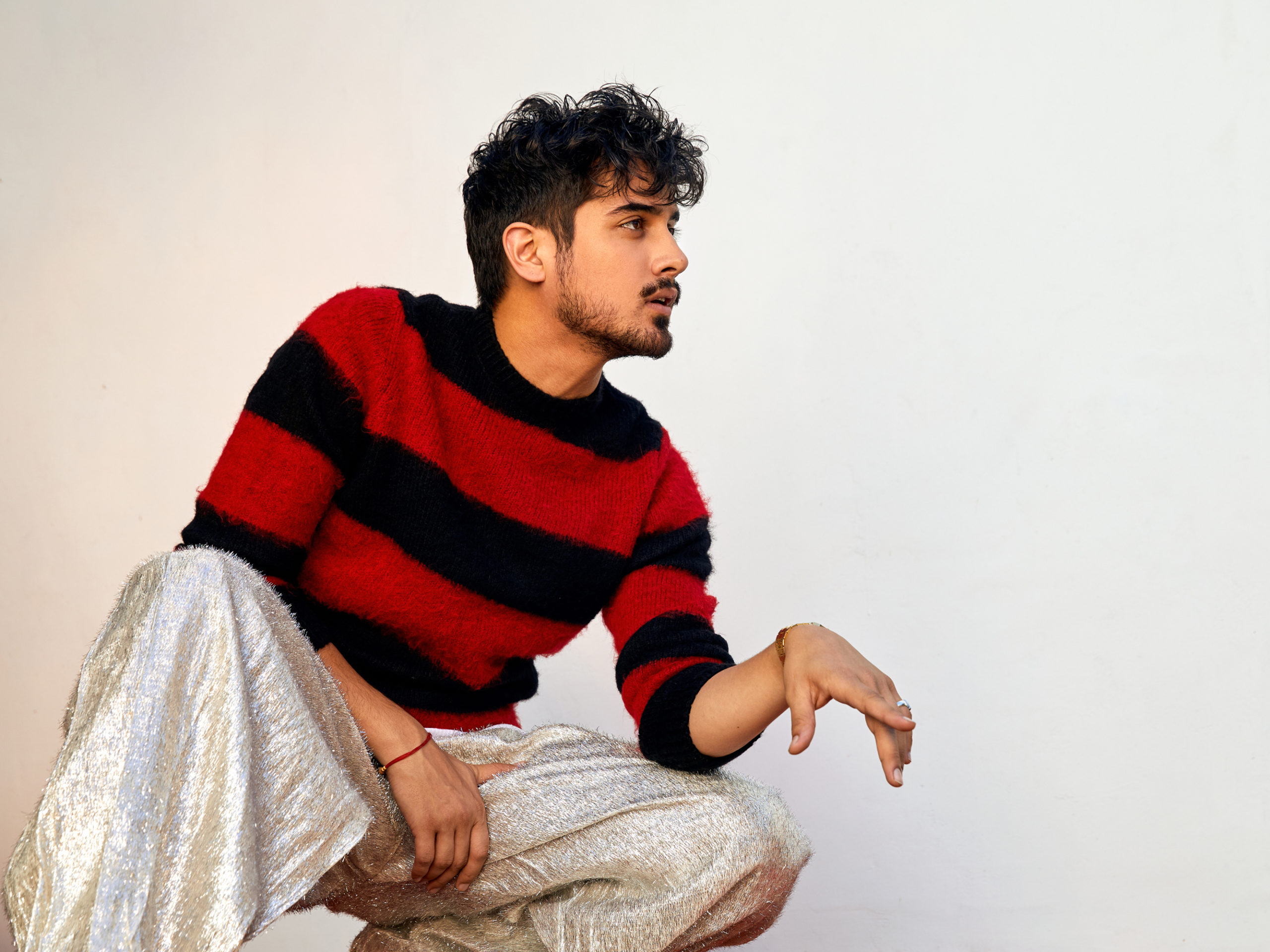 To suggest Avan Jogia has had a productive 2019 would be something of an understatement.

Within the last year, the musician-author-actor has achieved a laundry list of artistic accomplishments that speak to his seemingly-endless creativity: he released his first book of poetry, embarked on a national book tour to accompany it, and starred in a new TV series, just to name a few.

Having been acting since he was a teenager, notably on the hit shows Victorious and Twisted, Jogia has picked memorable roles across genres and mediums throughout his career. His series Now Apocalypse, which premiered at the Sundance Film Festival and aired on Starz this past spring blended science fiction and comedy to hilarious and often-unpredictable results. It’s also one of two genre-bending projects this year in which he plays a stoner, the other being Zombieland: Double Tap, the highly anticipated sequel to the 2009 hit starring Jesse Eisenberg and Emma Stone. Earlier this fall, Jogia also completed a cross-country tour to promote his book ‘Mixed Feelings’, a collection of poetry and stories focusing on mixed-race identities. In ‘Mixed Feelings’, Jogia brings a unique vulnerability to a project that marries his talent for storytelling to his own identity and upbringing. All of this makes it clear Avan Jogia is a multi-hyphenated and unique talent that everyone will be watching for many years to come.

We spoke with Avan Jogia and asked him about playing a stoner on-screen twice this year, his book of poetry, and his upcoming record.

You’ve been all over Twitter recently thanks to Victorious being added to Netflix. What is it like seeing that kind of love for the show, and especially your character, at a point in your career when you’re taking on so many new, vastly different roles?

I have such an appreciation for the love that that show has and gets, and so it’s very surprising to me. And you know, it’s funny just to see it develop and grow and find new audiences. It’s a super cool thing to have been a part of. You’ve had a huge year with many unique projects, from ‘Mixed Feelings’ to Zombieland: Double Tap. Looking back on the last year, would you say that anything has changed regarding the kinds of art you’re most inspired to create?

I feel like my whole life, and artistic life have been about just pursuing whatever makes me curious. As far as the book is concerned, I didn’t know I was going to be writing a book last year. I’ve been writing poetry my whole life, so to have the opportunity to release a book about a subject that I thought had meaning and explain my own story, as well as try to discover what a mixed identity might be. I don’t really think too much about impact as much as I think about trying to follow what actually makes me genuinely curious.

What was it like filming Zombieland: Double Tap and joining the cast?

It was great. It’s a movie with a lot of love behind it, so to join the cast and to have a good time and make fun of myself, make fun of other people and see them make light themselves, it was cool. For the premiere, you and your girlfriend, Cleopatra Coleman, recreated the Billy Bob Thornton and Angelina Jolie red carpet moment which has gotten a lot of media attention. What inspired you guys to do that and how do you feel seeing everyone’s reactions?

It’s funny, I didn’t think anyone would care. Premieres are what they are, they’re sort of silly events to begin with, you know? They’re important to promote the movie and it’s fun, but there’s a lot of pressure. A lot of pressure comes from an industry of people who have jobs in which they have to be concerned about carpets and looks and what people are wearing and all that sort of stuff. It’s an industry that requires us to care about it in order to live. I sort of was like, ‘eh, I don’t know, we’ll have fun’. Fashion is about fun. Also, it’s Zombieland 2! It’s the month of Halloween, you know, get started early. That moment is iconic, it’s a really interesting and fun moment. I thought people would be like ‘oh alright, fine, who cares’. But it’s amazing how much it took hold, like an Internet moment.

If, in ten years, you were to get a call about another sequel—what do you hope you’re up to?

I just try to concentrate on what moves me in the moment, and sort of avoid conversations about, am I an actor, am I a director, am I a musician, am I an author. I think just making stuff, whether that’s a movie or a book or performing in a play, whatever it is. Your book tour for ‘Mixed Feelings’ incorporated both musical and visual elements. I was wondering how you decided to approach that.

I don’t know about you but to be perfectly frank with you, I hadn’t been to many poetry readings. I didn’t really know what to do, so I’m just sort of doing what moved me. Me and my brother make music, so I just thought I would make some music in relation to the book, and then perform it for people and see what that looked like or see if that resonated with people. And it did, which was an amazing and incredible experience. From there it kind of developed into a record which will be released later in the year. Just making stuff and pursuing the things that make me curious.

How did it feel to get to meet people that the book has resonated with?

I make art all the time; different things resonate with different people. Having people come up to you and be incredibly emotional about their pain regarding their identity, around mixedness—that’s an incredibly moving experience. The fact I’m able to make art that can reach someone in this way is incredible to me. I realized I didn’t have this book when I was growing up. If I could just make something that maybe could stand as a sort of a guide—or at least a beginning of questions for someone who has a mixed identity—these are questions that have taken me twenty-seven years just to figure out what the questions are, and not even necessarily my answers to these questions. Having parents come up to me and be like ‘I have mixed kids, and I’m going to have this book to give to them when they’re old enough to start asking these questions of themselves,’ you don’t get that out of a movie as an actor. You just don’t. Making my own thing and making a book was an experience of art that really resonated with my values, or at least with what I want to do as an artist. Many of the people featured in the book were found online. Have you seen a response to ‘Mixed Feelings’ online that has also been inspiring? I saw that you asked people on Instagram to share their grandparents’ stories in relation to ‘Immigrant Song’.

I’ve heard amazing stories of incredible stuff, of perseverance and unity. What I find joyous, or at least something that makes me feel comfort, is that upon hearing all these stories and when I was collecting these stories for the book—because there’s a bunch of stories that are not my own in the book as well—I just noticed I’m so not alone. None of us is really alone, we all have similar stories. Hearing these stories of grandparents and the struggles they went through in order to give us the kind of life that we have, and the struggles our parents went through to have their love, to have children and the uphill battle of that, and acceptance and nonacceptance; it just makes me feel like a part of a larger community which is really what the book was all about. I wanted to really figure out if there was a community around mixedness: do we all have similar stories, and if we have similar stories, does that mean that we have a culture all to ourselves?  I’ve found that is the case and I have a feeling of belonging which is what the book’s supposed to do for the people as well.

You’ve worked for many years all over the entertainment industry, which especially recently has seen a strong push for diversity and identity-driven stories, both onscreen and behind the camera. Did your personal experience in that line of work affect how you approached the book?

Yeah, absolutely. As an actor, you’re asked to think about your race a lot—how you’re seen, how people perceive you, how you perceive yourself, what roles that avail to you. I think after twelve years of being an actor and being confronted by my race and not having an answer, not having a question, not feeling like I was not brown enough for what they wanted, or feeling that I was too brown for what they wanted, I sort of arrived at this conclusion that maybe I need to go and dig a little deeper and figure out what my actual feelings of my identity are before I continue to engage in an industry that is constantly asking these sorts of questions. With your book, your music, and your work in film and television, how has working across multiple mediums allowed you to share aspects of your own identity?

When I think about creating something, the first thing I think of is, ‘what is the theme of what I’m trying to say?’ Then I try to think about what is the best way to deliver that theme or message or feeling. You know, I’d write a script, ok, so now is it a really good script? Maybe it isn’t a script, is it a book? Maybe the book’s a better way of describing it. Looking at all the vehicles and all the mediums that you can deliver this information in, I felt poetry was the most direct and effective. Because, again, the most direct line for me as an artist is to think about what I am and what my feelings are directly on the subject.


For more information on Avan’s book ‘Mixed Feelings’ and where to buy, visit www.avanjogia.com.