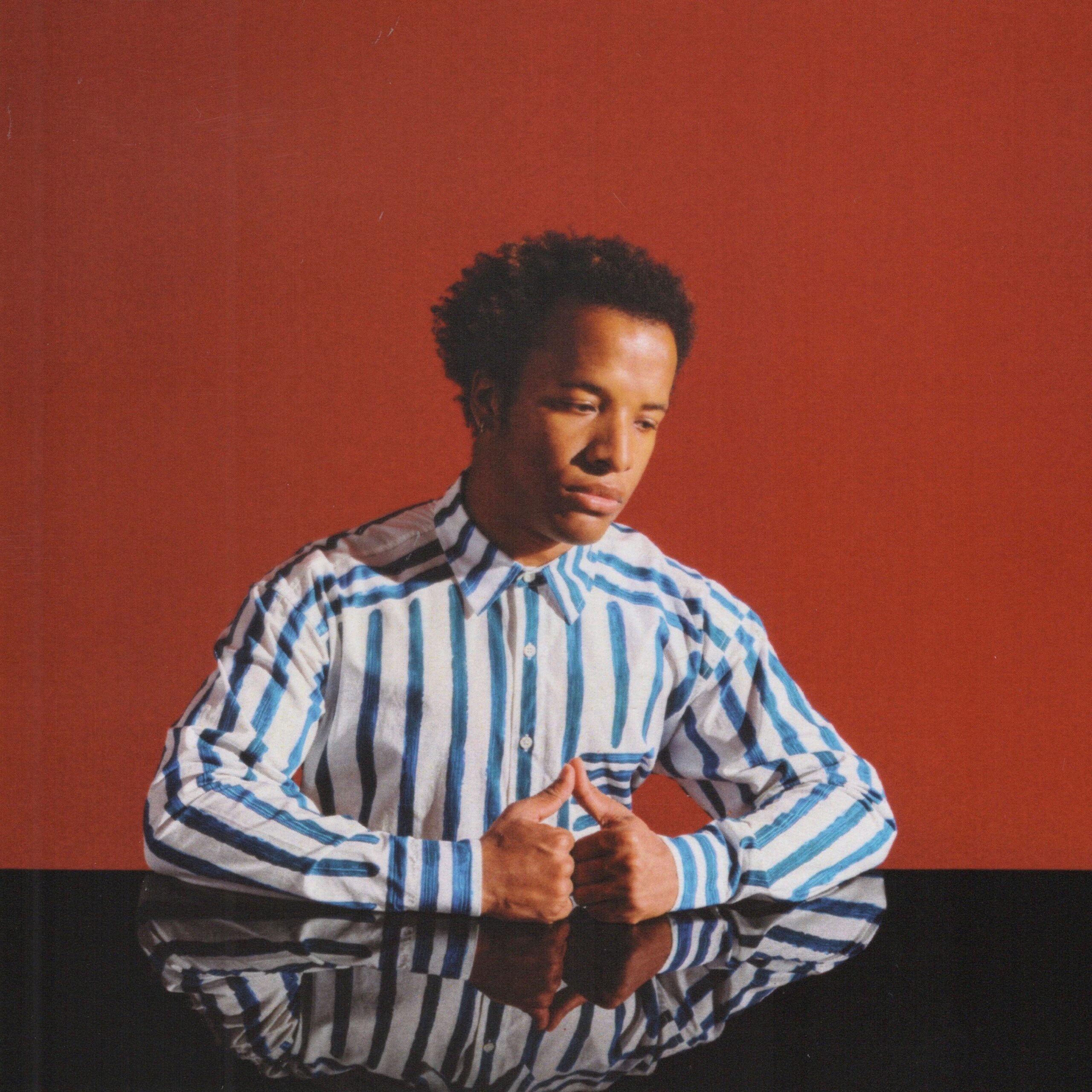 Cautious Clay’s Deadpan Love is something of a thought-provoking paradoxical debut album.

Joshua Karpeh (aka Cautious Clay) understands that life is all about contrast; karma and destiny, love and hate, and, for him, being deadpan and feeling love. It’s when Karpeh thought deeply about this contrast is when he concluded that the album must be called Deadpan Love, a 14-track record that navigates Karpeh’s experience as a human and artist and the different facets of himself that flicker in-between those two labels. Hailed for his work with John Legend and Taylor Swift, the Brooklyn-based artist pens tracks about the human experience; crafting sonically compelling hooks & a larger-than-life sounding production, with introspective lyrics.

1883 Magazine caught up with Cautious Clay to discuss all things Deadpan Love, getting inspired by Muhammad Ali, quantum physics, and more.

You released your first EP, Blood Type, in 2018 and now you’re about to release your debut record. How would you say you’ve grown as an artist between now and then?

I’ve started to fully understand what keeps me going as an artist but also being comfortable with not knowing and not understanding all of the time. It’s something I’m totally at peace at now, or at least as close to peace as I could possibly get. My life as an artist has evolved into a multitude of things, as a producer, writer, vocalist and songwriter, but I think at its core, I’m an artist. That’s where I find myself at my strongest. I feel a little bit more aware of sort of what inspires me and try to harness that information, in that energy when I can, and use that to become a stronger writer and singer. When I first released that EP, I had been singing for a year or two so it was all pretty new. I think now that I’ve been doing this professionally since 2018, I guess it’s a little easier in some ways.

You touched on embracing the unknown a bit and it made me think of the post you made comparing you in 2017 as a real estate agent and now, about to release your debut record. Was music something that first felt like an unattainable or unrealistic career that prevented you from pursuing it at first?

Sort of because I didn’t have any mentors or guidance. I had a really, really incredible flute teacher who inspired me, and a great vocal coach my senior year when I started to sing, but I didn’t know anyone deep within the music industry. Breaking into that and understanding the process was completely foreign to me. I basically saved up a bunch of money as a leasing agency, and when I was in ad sales and went for it.

I love that you’ve veered away from joining a record label that has allowed you total control of your work. Has it always been important to you to have complete creative control with your music — from the sound to the artwork and everything else?

I hadn’t realized the significance of it until I met my manager and he helped me figure it out. He’s been an incredible force, especially educationally, in my life and a huge part of who I am today is because he was so knowledgeable. I feel very lucky that I found him as a manager because he had so much experience and I really only had to worry about making music. He figured out the business side of the industry and gave me the agency to just pursue the music side of things. He’s never told me what I need to do which has allowed me to create things in a freeing way. In general, we’re both self-starters and we want to build things our own way. Creating things outside of a label has been an experience in hope; hope that we can just continue to create this way. Your debut record is called Deadpan Love — can you tell me a bit about the name and why you decided to call the record that?

I had originally called the album “Karma and Friends” because I felt like, in a lot of ways, the friendships and the people that we have in our lives often determine the trajectory of our lives. We’re only as good as the people we surround ourselves with and we’re only as good as the music we listen to. Relationships are really the only things we can rely on to a certain extent. Anyone who tells you they did it themselves is just lying. There is always someone in your life that took you to the place you’re at now. I thought about that in the context of how those relationships, how I treat those relationships, and how I’ve moved throughout the world as a human being. I wanted to make this an album about the human experience, but then also directly from my experience as a human in the world. I’ve always kind of felt kind of cynical, but also at the same time very earnest and trying my best. It’s just who I am — this person who has this deadpan side of themselves that is a bit nihilistic and witty, but also this side that’s empathetic and compassionate and earnest. I feel those are the two sides of who I am.

When I read those two words together, I thought they were so contrasting in the best way; you wouldn’t think deadpan is the opposite of the word love but in a way, it is.

They are sort of paradoxical in a way. They are two ideas that don’t work together but make sense. I got into this discussion with someone about quantum physics and how quantum physics and the theory of relativity are paradoxical to each other because, in theory, they work together but they haven’t fully found a way to make them actually work well together. It’s the largest mystery in physics today. I like thinking about how we all move throughout the world not exactly making sense but making sense at the same time.

Going off that — when you mentioned moving throughout the world, I wanted to say I loved the little snippet you put on the album, Why Is Your Clay So Cautious. I know your artist name was inspired by an Uber pool conversation a few years back about Cassius Clay, who was Mohammed Ali. I read in another interview that you like that a name can change easily, which I thought was quite poetic given your start as a real estate agent and embracing music. I know you likely didn’t mean for it to be that deep, but I liked it!

It was a bit of a joke, but I also like the idea of your name and ownership and thinking about how those things play into your identity. Cassius Clay was his given name, but Muhammad Ali was the name that he chose. It’s the idea of separating the artist from the musician because once I make this music and once it’s out there, it’s no longer mine.

Spinner is one of the standout tracks for me — it’s beautiful. I love the lyrics “When you’re living for your dreams/it’s never quite exactly what it seems/on screen” Can you tell me about the inspiration behind that track?

It was inspired by being an artist and the expectations that come with it and trying to abide by them, but also questioning how people perceive those expectations and actions. You’re creating narratives out of thin air sometimes and you can feel like no one will actually know who you are or be able to relate to you outside of the music you create. The idea of being a spinner is being a liar or a deceptive person which is sort of synonymous with being an artist in the context of what the song is about.

Bump Stock is the perfect album closer, in my opinion. It feels so euphoric. What was it about that song that made you want it to be the final track?

It’s that euphoric feeling that led to it being the ending track, but the lyrics are pretty heavy. I liked ending the album on a note of feeling like okay, life can feel euphoric and big but also super melancholy and sad and frustrating. I felt like it was a perfect sort of closing track for it. Something I love about your music is that there can be a lot going on, in the best way, in regards to the production, but your lyrics always seem so intimate and honest. Are you ever hesitant about being as vulnerable as you are in your music?

Definitely not at this point. I might have been a year or two ago, but now I think I don’t feel like I’m being vulnerable in an obvious way. I have songs that are pretty honest and people don’t seem to care, but I know they don’t get the significance of how personal they are and that’s completely fine. Sometimes it just goes over people’s heads, but the nice thing about music is that people can get as deep as they want or just experience it more on the surface level and both ways are fine.

As a whole, how would you describe this body of work and what it represents to you?

It feels like an expression of who I am as an artist — the good, the bad, and the ugly. It shows that I just live my life, I try my best, I make mistakes, and just do what I can to express all of that in my music.

Lastly, once when somebody is done listening to this record, what do you hope they kind of take away or think about after?

I hope they reflect on their experiences with people and maybe get inspired by this body of work. I hope they can get some fun out of it and just feel like they can find inspiration through it. That’s all I could ask for.

Deadpan Love is out now.