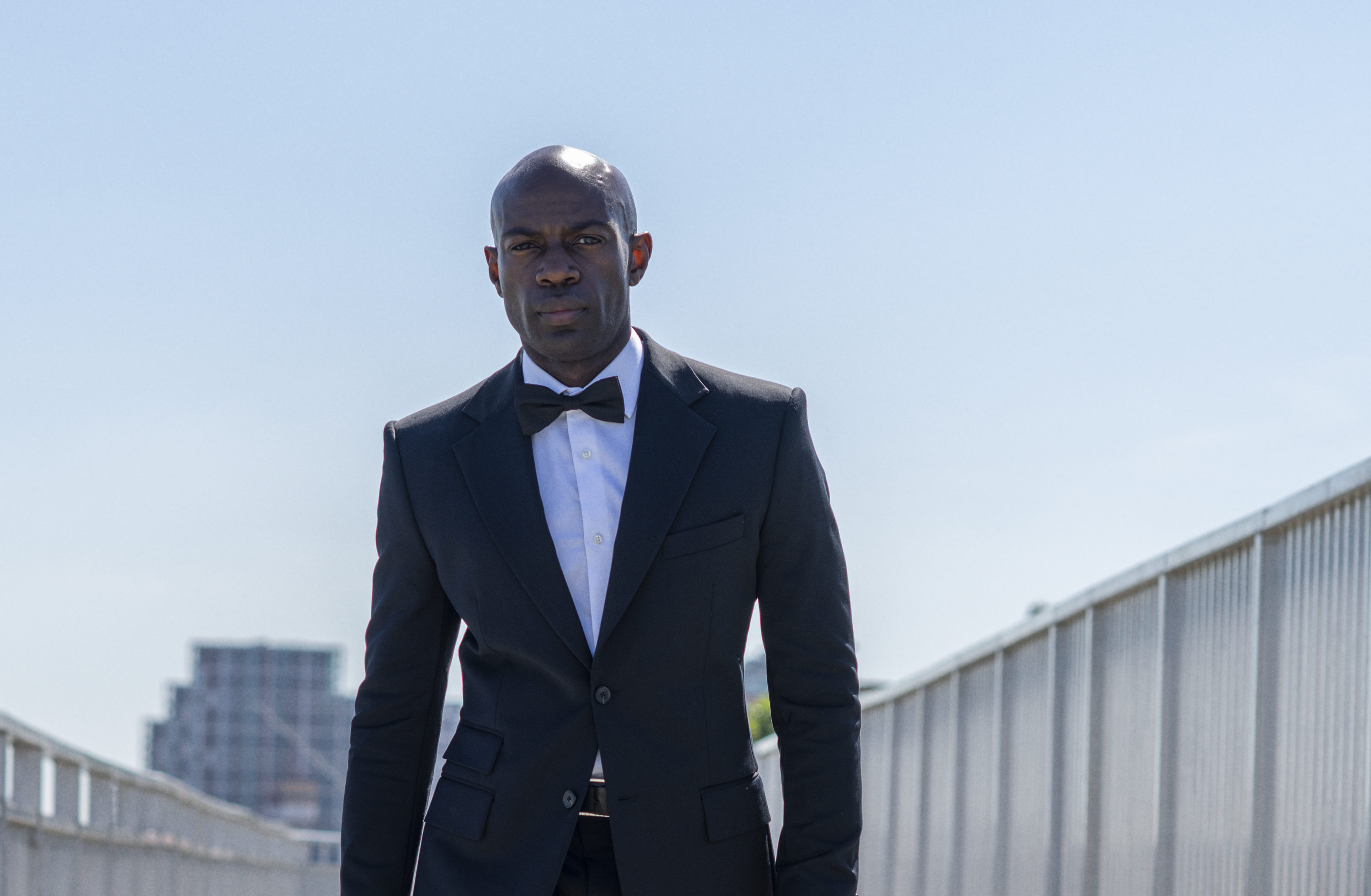 After roles in Troy: Fall of a City and Annihilation, British actor David Gyasi has found himself diving more into fantasy projects than ever before.

In Carnival Row, Amazon Prime Video’s latest hit series, David Gyasi plays Agreus, a self-made faun who defies all traditional norms and lives amongst the humans who have fought so hard to control him and his fellow mystical creatures. Although the show is very much fantasy, it pulls in real-life issues, like the refugee crisis and social/racial oppression. These themes are important to Gyasi, who feels that ‘art imitates life which imitates art.’  Next month he will star alongside Angelina Jolie and Elle Fanning in Maleficent: Mistress of Evil, a sequel to the first Disney flick which also showed the conflict between humans and the mythical, as well as how detrimental empathy and understanding can be when trying to understand others who don’t always look like them.

A contrast to the multiple fantasy projects Gyasi has been working on will be his next role in Hell on the Border: playing historical figure Bass Reeves, the first black deputy U.S. marshal west of the Mississippi River, known to have arrested more than 3,000 felons. This role, in particular, attracted Gyasi after he discovered that what the media created about Reeves was warped and recreated him as a white man named The Lone Ranger.

We spoke to David about his new role on the well-loved Carnival Row, how important it is for him to seek out projects that dissect real-life issues, and what it was like working with Angelina Jolie. You’re starring as Agreus in Amazon Prime Video’s Carnival Row. I’ve seen the first few episodes so I’m interested to talk to you about it! For our readers, can you tell us a bit about the show and your character?

The way I like to explain this show is to get people to picture two lands; one is full of mythical creatures, the other one is full of humans. The humans decide that they would like to have control of the mythical land but they kind of war over it in their own human tribes. What happens to the mythical land is that it gets decimated and the inhabitants are forced to flee or perish. They flee and seek refuge in the human land of a particular area called the Burgue and Carnival Row is like the downtown part of the Burgue where all the wonderful, beautiful, weird and unique creatures intertwine with the humans. There are other areas of the Burgue, like Finistere Crossing, which is where my character lives, which makes him a bit of an anomaly. Finistere Crossing is where all of the rich humans live. My character’s place is to clean people’s shoes or to do their washing, it’s very much a ‘seen-and-not-heard’ area for people like my character who is a faun, or a Puck, a derogatory term for what my character is. My character purchases the biggest and the most desirable house with cash and moves in during the first episode. You begin to go through the season and see what I describe as the fire within his belly to strive to do well and succeed in this world which has placed so many restrictions and barriers in front of us. That really intrigued me and made me want to play him.

The show is fantasy, but it also mimics real life by including issues we face today, like the refugee crisis. Your character also defies the existing social structure in the show by moving into a neighbourhood that consists of all humans. Did these themes draw you to the show?

Yeah, hundred percent. I was shocked at how relevant the show was when I read it five years ago because of a scene, which you would’ve seen, where the bodies of faes wash up on shore and many of them are dead, including baby fairies. Four or five years ago the Syrian refugee whose name I believe is Alan Kurdi, a three-year-old boy, washed up on the Turkish shores. I remember thinking at that time this is incredible; the writing was incredible, and I thought it was phenomenal that Hollywood was able to react to what was going on in our world that quickly. Midway through reading, I found myself getting excited by what I was reading in the script so I called my agent and said ‘I love this world and I would love to be involved, but tell me how has Hollywood been able to react to what’s going on in the world so quickly?’ My agent said, ‘What are you talking about? This script was written ten years ago.’

There is an Aristotle quote, ‘art imitates life’. Oscar Wilde challenges that and says ‘life imitates art.’ I wonder if the two aren’t mutually exclusive and we just have art mimics life mimics art recurring, you know? When you look at what Carnival Row deals with, you could place the show or launch it at any point over the last 3,000 years and not find the conflict or situation in our history that it doesn’t relate to. Yes, it is influenced by and fuelled by what’s going on. but I think that’s just being an artist and listening to the vibrations around him and saying ‘we have to talk about it.’ It’s one of those really sad situations that we find ourselves in with this material, that this is still relevant today. You also went to Comic-Con to promote the show. What was that experience like?

It was amazing. I’ve been to a few Comic-Cons now and the first couple of times I was a lot younger. I always said that, to me, the rehearsal process, the filming process, or the theatre process if you’re on stage—that feels like the work and that’s why we got into the business to tell stories. I have struggled with this aspect of the job, like promoting it, because I kind of feel I’ve done the work and now people will watch it. If they watch it, great, if they don’t, they don’t. At least the work is out there, like a piece of art. I haven’t seen every piece of artwork out there, but it’s still out there being consumed. But when I stumbled across it, I enjoy that intimate and personal experience that I had a piece of artwork or in the cinema with a group of people, I enjoy that interaction. So, I never really want to kind of jump into that space. I’d always felt that was sacred to people. For Comic-Con this time around, I was able to see the passion that people had with the work and the appreciation for the work. It was just such a delight to be promoting a show I absolutely love and am very passionate about. It was an incredibly enjoyable experience. I really had such a laugh with my castmates, so it was a win-win situation in every aspect of the word.

In your upcoming film Hell on the Border, you play the lead role of Bass Reeves, the first black deputy U.S. marshal west of the Mississippi River. What was it like playing such an important historical figure?

It was an absolute honour. Firstly, I don’t tend to have my phone on after a certain part of the evening, but my American manager sent me something and they phoned me and suggested I read the script. I did and discovered this incredible man who I somewhat heard about but didn’t know the full extent of the story. So, to uncover this guy who was one of the first African-American lawmen and served over 3,000 warrants in the Wild West, which is just a brutal environment. It’s reported he never returned a warrant unserved. Then to find out that books and comics were written about him, and film and TV series were made about him, but because of the color of the skin, it was decided that a hero can’t look like that, so they made him white, put a mask over his eyes and called him The Lone Ranger. I was like, ‘what?! How did I miss that?’ So, to have the privilege and the honor of telling that story on this scale is incredible. But then there’s the weight of it as well. I want to do it right. Ideally, we’d love to tell this story in three parts if we are blessed to be able to do that. What we do is give a snippet into who this guy was within the first part. I’ve seen cuts of it and I’m really excited to share the real story with audiences. Later next month you’ll be starring in Disney’s Maleficent: Mistress of Evil. I couldn’t find much about your character so I’m sure it’s hush-hush, but what can you tell us about the film?

Well, I can tell you that it’s been well-received! I really enjoyed the first one. What I would say about my character is that it is very different from Carnival Row; in Maleficent I’m a human and they have very set beliefs as to the way things should be done. He’s a General in the army and the right-hand man to the Prince. Throughout the course of the film, those beliefs are challenged, and he has to decide if those beliefs which have been handed down to him over time in a military background are right. It’s been nice to explore, especially after doing Carnival Row. It was also nice to not sit in make-up for three hours and it was filmed twenty minutes away from where I lived, so that made me very happy! [laughs]

You’re working with Angelina Jolie twice in your upcoming projects: Maleficent: Mistress of Evil and Come Away. What was it like working with her?

It’s an absolute delight. A huge part of my experience is watching her operate on a set. I found her very inspiring and I found her to have a lot of poise. When you are, from my experience anyway, up there and you have a certain level of profile, I think people come to the table with preconceived ideas. They can assume what you are and what you’re all about. What I witnessed was she’s very studious, very focused on her work, and just really dignified in every way. I really enjoyed the chats that we had. I was like a sponge just getting all of the advice I could get. I was very grateful to work with her and I hope we get to work together again on another project. Besides acting, what are some of your other passions or hobbies?

I’m crazy about my family, I love them to bits. I enjoy my quiet time, even though I haven’t had that much of it lately! What I mean by that is long walks, prayer, meditation, and reading. I find all of that really charges me. I enjoy sports; the playing of it, the watching of it. I really enjoy friends and good, strong friendships. And, of course, good food. I’m sure there are other aspects of me, but those are the key ones.