The Battle between the Princess and Cushion Cut Diamonds

The shape of a diamond picked out to appear at the center of an engagement ring is central to the process of selection.

It is often where the design begins and ends. An engagement ring gets fashioned with the priority of complimenting and enhancing the center stone. Therefore, it is where your search for the perfect ring should begin.

Diamond shapes and cuts have evolved widely since their first days. Through the centuries, lapidaries have presented us with many exquisite cuts, and thanks to that, today, we have eclectic selections to choose from. Even though several cuts have arrived in the market since the early years, the round brilliant cut still stands on top. It enjoys an iconic status amidst the comings and goings of other competitive cuts. That said, customers get a delightful mix of cuts to choose from, which contains both simple and more complex diamond cuts.

But today’s piece is not about the round cut. It’s about the next best cut to the round- the princess cut diamonds and their closest cousin the cushion cut diamonds. Both the princess and cushion cuts enjoy popularity among the buyers. Very similar in shape and style, these cuts are both brilliant and beautiful. However, to understand which of these contemporaneous cuts best define your style and work for your personality, we need to delve deeper into the cuts.

The Cutting of Cushion Cut Diamonds 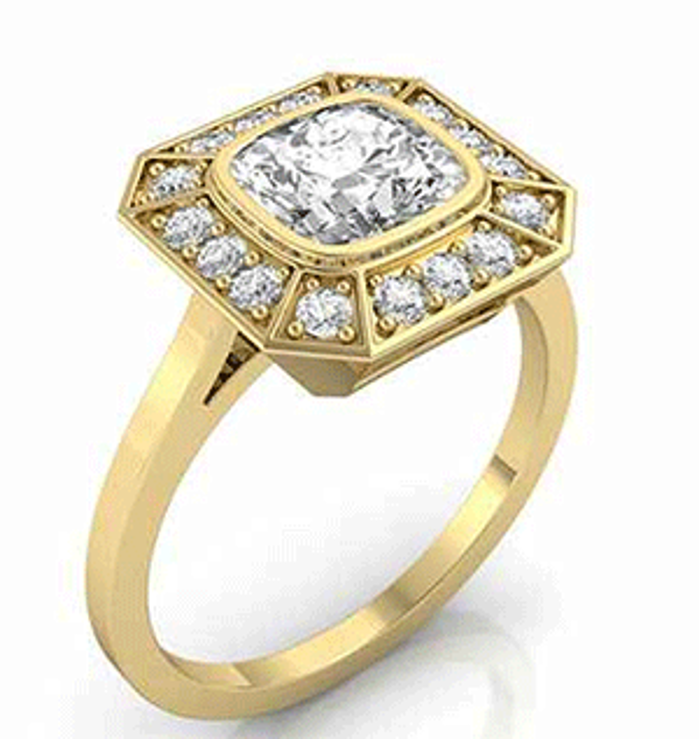 The cushion cut diamonds dates back to the 17th century, when its prototype, the old mine cut came into the limelight. The iconic silhouette of the cushion cut that we know today was still in the making back then. The creator of the old mine cut, a Venetian polisher, Vincent Peruzzi, took the old mine cut, and then he chipped out an extra few facets from its 17 facets geometry. Voala, a 33 faceted star, was born. This cut boasted of more brilliance and fire and had a style that distinguished it from all others. The upside of this new cut was that it was easier to carve than the round brilliant and yet had an intense sparkle that made it distinctive. Today, the cushion diamond cut through years of evolution has come to feature 58 odd facets. 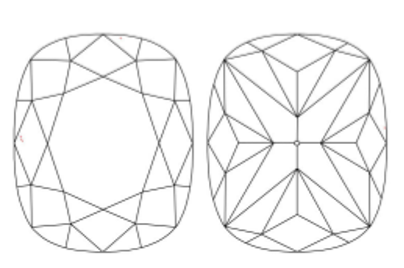 Interestingly, cushion cut diamonds pretty much dominated the diamond scene for 200 long years, just the same as the round brilliant diamond cut does now. But by the 1900s, its popularity began to dwindle. However, that has changed for the better now. The cushion cut diamonds has made a significant comeback in recent years. The credit for it goes to Marcel Tolkowsky. This gentleman is behind the commendable work of refinement that the early cushion cuts underwent to become the cut we know today.

Tolkowsky developed an intelligent method by which the old mine cut got enhanced in a significant way. Through his procedure, the abnormally large culet, the small table, the high crown, and the deep pavilion of the earlier version of the cushion cut diamond got tackled effectively. With his instructions, the culet shrank many sizes. For instance, the table became bigger, and the crown shorter. The bestseller that the cushion cut diamonds are today owes it all to Tolkowsky.

The unique thing about the cushion cut is its shape. The geometry of the cushion diamond cut bears a roundness and a sharpness that are only peculiar to this cut. Softly square, but with a bit of angularity, this cut is nothing like the other cuts we see. It’s vastly different from its distant cousin, the radiant cut, having missed its beveled corners, and the princess cut, which is its closest neighbor by the roundness, is all about this unique cut. 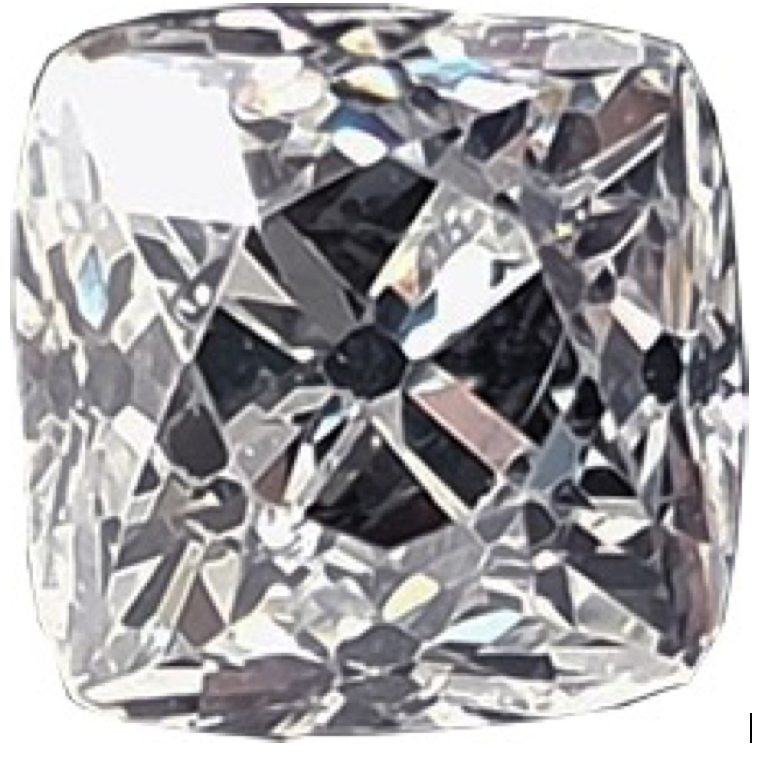 The Old Mine Cut 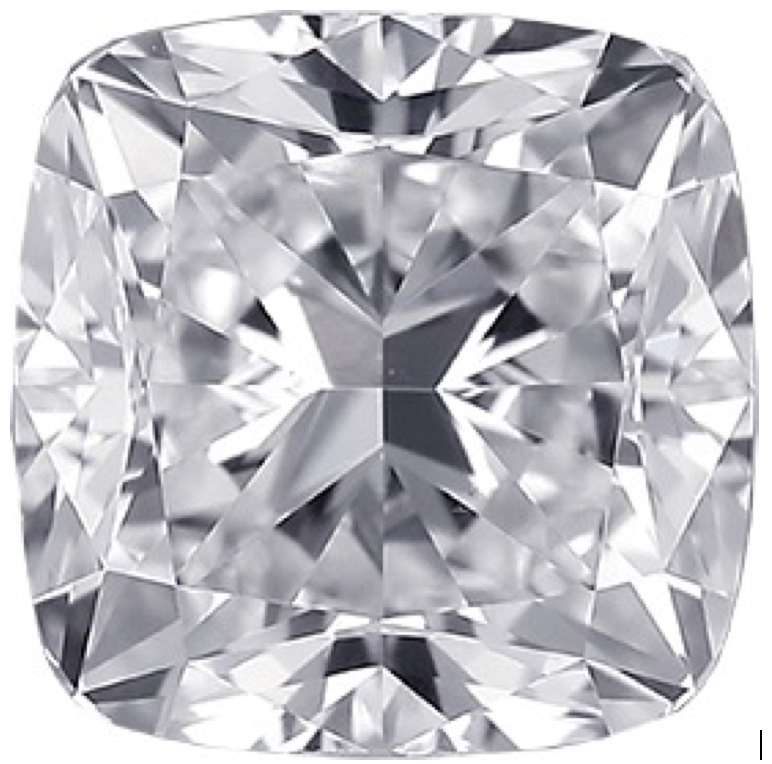 As said earlier, the modern cushion cut diamond has 58 facets which cut its hallmark sparkle and fire. At the pavilion, the cushion-cut diamond has between four and eight facets. Those facets give birth to the hearts and arrows phenomenon, which it has in common with the round brilliant. In these modified cuts, there is an effect referred to as “crushed ice”, which in other words is intense scintillation. Simply put, these advanced cuts have more scintillation and fire than the regular cushion cut diamonds, which makes them more stylish and beautiful.

If considering cushion cut diamonds for your engagement ring, you need to know about all the cuts that work with it. The good news is the cushion is a versatile cut. It blends effortlessly and works incredibly with a bundle of gem cuts. However, to give you our opinion and understanding, we believe that the round brilliant cut pairs best with cushion cut diamonds. Other cuts used to flank a center cushion cut stone are the cushion itself, the half-moon, and the trapeze. 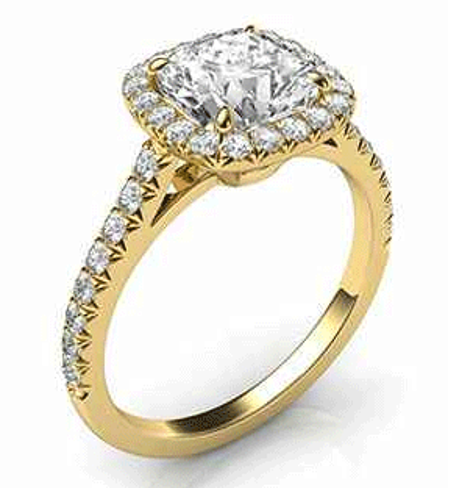 Some factors make buying a cushion cut diamond quite a project. Not only should a cut like it be evaluated based on the 4Cs of a diamond, but there are other aspects to consider as well. For example, you need to decide if you want to go for a classic or an advanced cushion cut. Then comes the choice between the square silhouette and the elongated one. These are personal decisions and are not parameters against which the quality of the diamond cut is measured.

Other things you want to aim for when buying a cushion cut diamond are excellent symmetry and a medium to thick and sturdy girdle that protects the stone from easy damages. 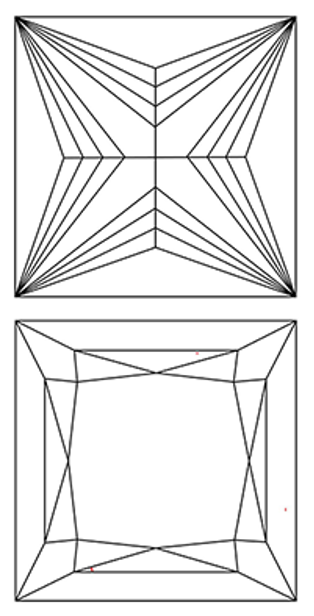 What in parts makes the princess cut diamonds remarkable entrant in the list of diamond cuts is its scintillating combination of geometry and sparkle. The shape of the princess diamond cut sets it closer and apart from both Emerald and Asscher. The princess cut ranks the higher among its close kin in brilliance and scintillation. The fire that this diamond-cut boasts of is comparable with its adversary, the round brilliant diamond cut.

One thing you need to know about the princess cut diamond is that it features extraordinary facet count. Although the number varies from one stone to another, it ranges between 57 and 76. You would think that it is specific, and it is so. It is evident from the varying number of facets the princess cut diamonds has more than just one geometry. The pavilion and the crown facets lend to these different geometries. The pavilion features a diversity of chevron patterned facets on which the brilliance of the stone depends. However, making things simple and giving you a clearer idea, the more facets a stone has, the more is its brilliance. That said, a princess cut diamonds with two sets of chevron facets produce more flash and sparkle than those below that number. Likewise, the higher you go, the more sparkling the stones are. 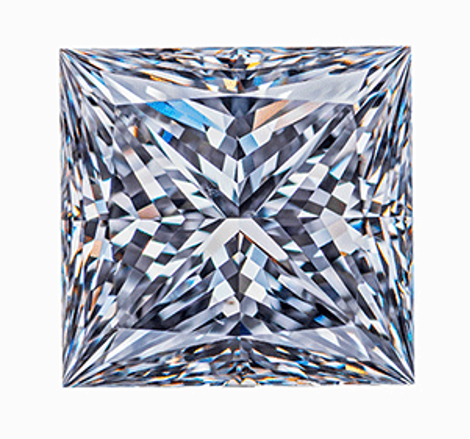 Although the princess cut diamonds may appear perfect square to the eye, it is not always the case. On the contrary, princess cut diamonds feature slightly rectangular shapes. But you need not worry about the ideal ratio for the optimum ratio is set right here for you. The optimum ratio is usually between 1.00 and 1.05. Although it seems like a minute difference, it is enough to make a diamond square or rectangular, but a commoner cannot tell. In this range, the diamonds are very slightly rectangular that makes them perfectly square to look at.

Side Stones for the Princess Cut 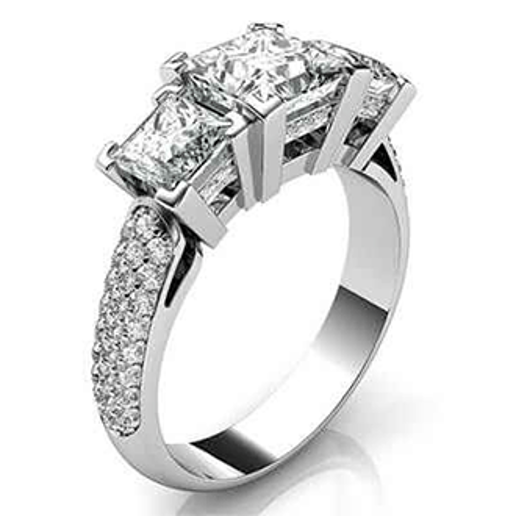 Your focus when buying a princess cut diamond should be the 4Cs. That aside, the design of the ring is a significant consideration too. With available metals like rose and yellow gold, you would want your stone to come from color grades ranging from G through H. In these ranges, the diamonds are icy white to look at. For whiter metals, the clarity should never be less than Slightly Included 1, as diamonds in those grades have great brilliance and scintillation. The depth% and table% should not exceed 72%.

So, what would the verdict be? The truth is it should all come down to individual preferences, but to give you the facts that this article aims to supply, both the cuts have their own sets of merits and demerits. For example, the cushion cut has superior sparkle, is versatile, and has affordable pricing. Moreover, it has a size disadvantage. Comparatively, the strengths of a princess cut diamond are price, size, and versatility, but it does poorly in color and care. So, weigh the pros and cons well enough and see what works in your interest before you decide to go with a particular cut.