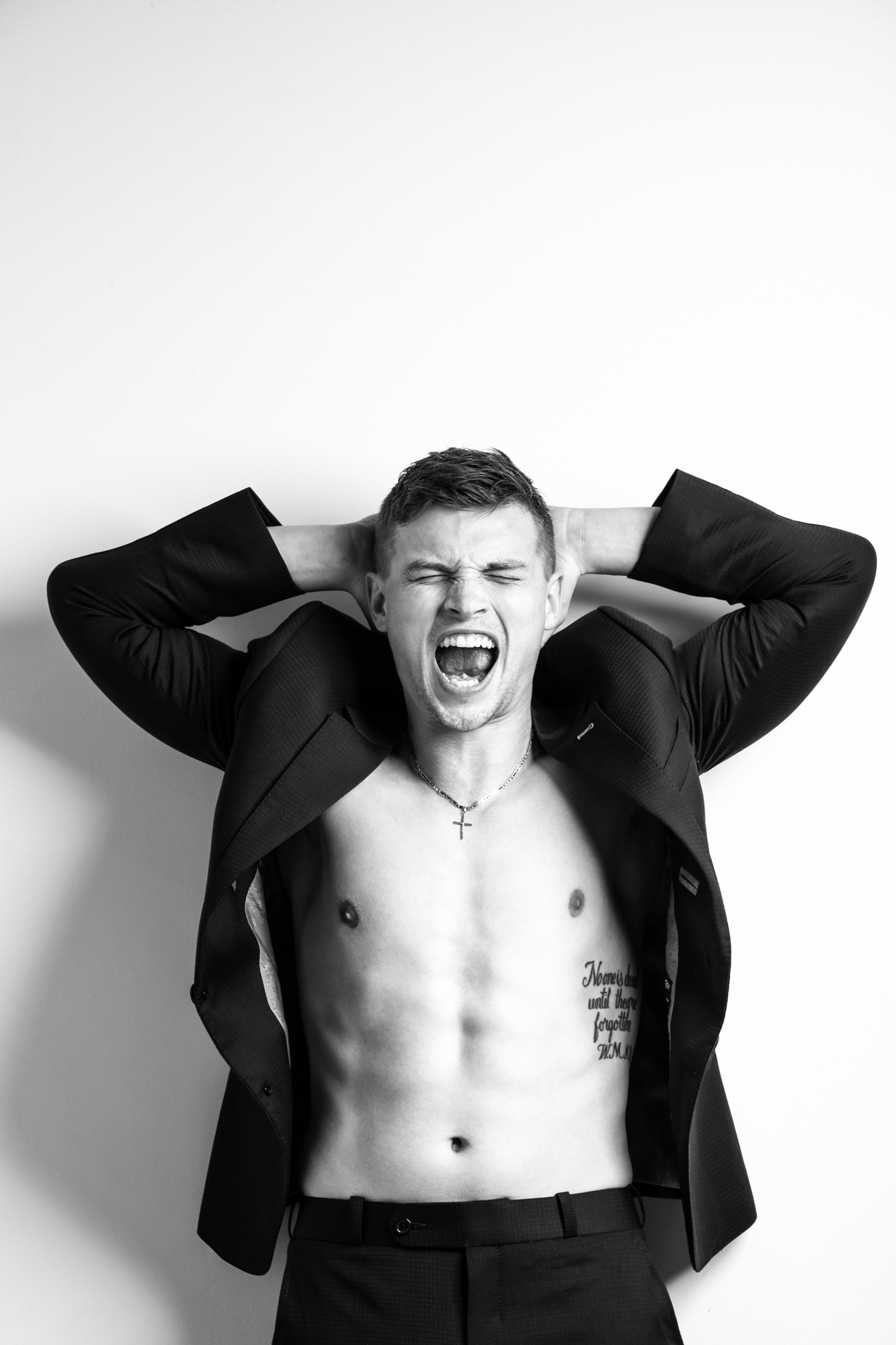 The beauty of Canadian actor Darren Mann is that he refuses to settle, whether that’s in hockey or his acting career. Mann began acting at a young age and then, like any true Canadian, decided to pursue a career to play hockey professionally. After a lot of determination and a few injuries, Mann decided to go back to the thing that brought him just as much joy as gripping a stick and hitting a puck—acting.

His latest project is the gritty & raw film ‘Embattled’, a film about an aspiring MMA fighter and his relationship (or lack thereof) with his father. Mann plays Jett, the son of an established and celebrated MMA fighter named Cash, played by Stephen Dorff. Although the film is shaped around the world of MMA, it’s the intricacies of abuse, toxic masculinity, and family relationships that’s at the heart of this movie.

1883 had a chat with Mann about his career, weaving hockey into his acting, and his new film ‘Embattled’. I know you started acting when you were younger, but you focused a bit more on hockey as you got older. What was it about acting that made you want to pursue it as a career?

I started as a kid and always enjoyed it when I was younger. I didn’t have tons of commercial success or anything, but it was always a lot of fun and I enjoyed learning and the classes and going to set was always really cool. But, you know, I wanted to be a hockey player and with hockey, you have such a limited window as far as what you can do and how far you can go. I thought I could pursue acting at a later time because I’d have plenty of time to do that when I’m older and I can do grandpa roles until my 80s because I can’t play hockey until then! [Laughs] So I played a minor league in the States and I kept getting the same injury I was battling through junior hockey so I thought it was just time. I was at a place where I was at peace with letting it go. I don’t like to give up on things unless I have to and I’ve stretched every limit possible, but trying it and going for as long as I did gave me the freedom to say I gave it my all and be okay with moving on. I knew I’d switch back to film at that moment.

This is amazing because even with hockey because you’re Canadian, there’s always going to be outlets for you to play whether it’s recreationally or not.

Exactly! The beauty of being Canadian! [Laughs]

Although hockey and acting are quite different, I wanted to know if there was anything that you’ve taken from your time as an athlete and used in your acting work? Whether it’s something mental, physical, or something else you apply to your acting framework.

Oh, 100%. In interviews I find I circle back to hockey in some way because, without those years in the sports world, I don’t think I’d be where I’m at today. There are so many valuable lessons I learned from all of the great coaches I’ve had that instilled a work ethic and built character and integrity in me that’s difficult to achieve. Those are life lessons that you take when you’re young and you obtain an open mindset. At that point, you’re still learning and becoming your own man and that was always really impactful to me. You star in the new movie Embattled, a gripping movie that seems like it’s about a sport, but it focuses on the intricacies of a family and the ripple effect of abuse. Can you tell me a bit about the film in your own words and the character you play?

That’s what drew me to the film in the first place was the script and how it’s a no holds barred authentic family drama—it’s gritty and raw. Our writer, David McKenna, I have so much respect for him and what he does. He’s not afraid to go there with characters. At the center of the film, we have a toxic father/son relationship and a young man who I play named Jett who is trying to find his way and his path. It’s that pivotal moment of his life where he’s trying to figure out who he is. He’s a very selfless young man who cares deeply about his brother and his mom. He grew up quickly in the sense of wanting to help out his family, his brother in particular who has Williams Syndrome and trying to help give them a better life through a career as an MMA fighter.

His relationship with his father is such a complex one, too.

Yeah, when we meet him he’s at a place where he wants to look up to his father as a role model, but it becomes clear to him that he doesn’t want to become his father. He slowly figures out who he wants to become, what does he stand for, and what he wants to be remembered for.

I watched the film last night and the switch that is flipped when his father goes to hit his step-brother was such a gripping moment.

That’s my favourite scene actually because it’s that pivotal moment where it becomes clear to him. You know he wishes he had this great loving relationship with his father, and you see him having this hope throughout the movie that it’ll happen, but he realizes it’s not possible and this isn’t the guy he wants to be, or look up to, or try to become.

What was it like working so closely with Stephen Dorff? How did you build your friendship both on-and off-screen?

I mostly worked with Cash [Stephen’s character] cause I know he was full-on into that character because of how difficult it was to play and he did an astounding job at it. As an actor working with him on set, he gives 100% in every single take whether it’s his coverage or not. He always stands up for his other actors, too, which is something I appreciated right from our first scene. He always wanted to be involved and know what’s happening on set even when he wasn’t there; he’d call on to set that day to know how it was going and what was happening. It’s something I respect about him as an actor because not everyone takes things that seriously.

Yeah, not many would go to those lengths to be involved on days they aren’t shooting.

Yeah, unfortunately especially in the television world you get a lot of actors who don’t bother when it’s not on their coverage and that’s not the way I like to play.

And you learn from people like Stephen; he sets a certain level.

Exactly, it takes off.

Sometimes it feels like Jett is living different lives — one at home, one at school, and one with his father. I can understand how you would physically prepare for a role like this, but how did you mentally prepare for this role?

That’s what appealed to me—there’s so much juice there and so many layers to Jett. David did such a great job of not making it easy; there was a lot he [Jett] had to juggle. It gives me so much to work with and I can create the character and feel his emotions and stresses and all the things going through his mind, especially at the age he’s at. I did my usual process with an acting coach and creating a character and walking in his shoes and bringing as much emotion into each scene. It’s a very intense film—is it difficult for you to switch off when the film wraps?

A vacation is always necessary after I’m done filming. They’re just long, gruelling hours and needing to shake a character off, especially after a film like Embattled. There was a time at the beginning of my career where it affected me and seeped into my life once we stopped rolling, lots of heavy & traumatic stuff would linger with me for a while. I’ve become a lot better at separating work and life!

One of the most touching scenes I found was right at the end when Jett is teaching Cash’s other son how to bowl, then juxtaposing that of his past with his father. There are moments where you see Jett brushing off toxic masculinity, like when he’s listening to Colbie Caillat. You were also in Hello Destroyer, another sports film that tackles toxic masculinity. Why do you think this is still such a prevalent topic to explore in films?

I think probably because it’s still so prevalent in a lot of our lives. It’s not something that’s just in sports, but it’s all over. We’ve all dealt with somebody who clearly struggles with toxic masculinity or we have someone in our family like that, so I think it all comes down to relatability. Showing it in films will hopefully show everyone how deep it runs and hopefully it’ll make people on both ends think about it in their daily lives.

What is something that you learned about yourself portraying Jett?

When I rewatched the film last week there was a moment where I realized how patient he is. He’s going through so much and he has so much responsibility, it’s really neat to see how much he lets slide off his back. He has such a long fuse with a lot of people and that’s something I’d like to take from Jett and apply to my own life.

Last question: what’s something people don’t know about you? And you can’t say you like Asian cuisine because that’s common knowledge now! [Laughs]

[Laughs] you saw my Instagram bio! Let me think…. I have a weird thing about the show ‘Survivor’. I have a dream of wanting to be on it.

I think after what you’ve learned in Embattled, you could do it.

Embattled is out now in select cinemas and on streaming platform