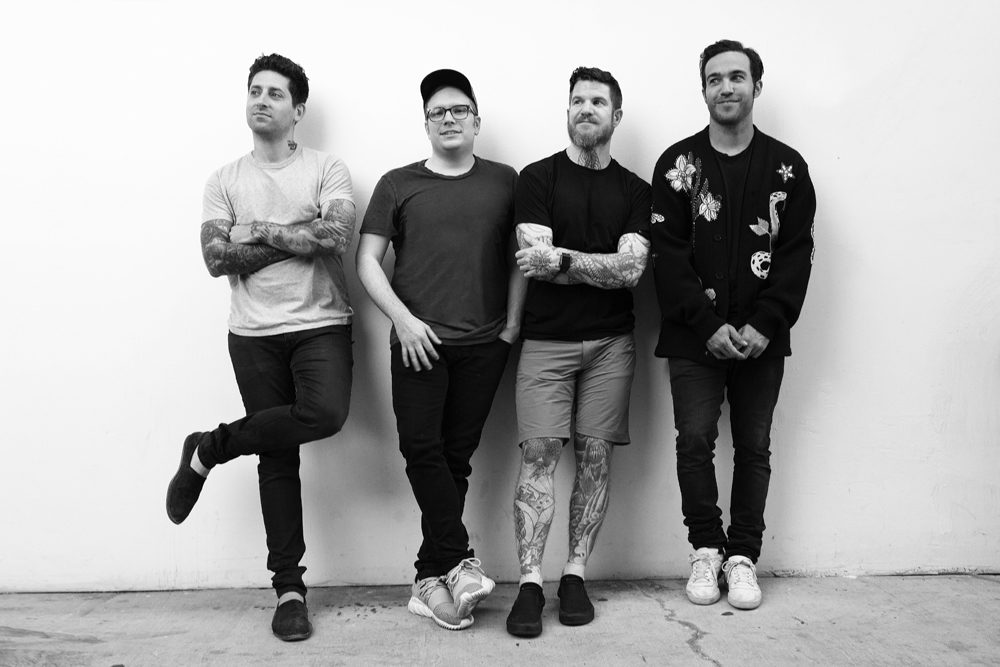 If anybody tells you they never had a Fall Out Boy phase in their life, chances are, they’re lying. Since they appeared on our mp3 players in 2003, it was hard not to get caught up in the wave of black and white chequered wristbands and black nail varnish trend, and of course with Fall Out Boys’ penchant for writing anthems.

Old CD collections might be gathering dust in the back of a cupboard somewhere but Fall Out Boy are not; with album seven on the way, the eagerly anticipated ‘Mania’, we attempt to break down some barriers with Pete Wentz and find out what’s changed since he got a haircut & discovered EDM.

I…uh….well….I use all kind of like…’pretty’ and ‘kinda’, my therapist says I try to create walls between me and other people so I’m always hazy about stuff.

Okay so lets try and break at least one wall down, just for the purpose of this interview!

‘Young and Menace’ has been out for a couple of months now, how has the reception been since you released it into the big wide world?

It was good, I think that it was an inspired reaction, there were people that loved it…it was like a modem connecting in the 1990s to them and that’s cool. It’s kind of like that aspect has died down and people accept it as part of the catalogue, part of the fabric of Fall Out Boy as it is now.

What about that fabric now is different for you, in terms of how you would have seen Fall Out Boy a couple of years ago?

I think that one of the things with being in a band, there’s four people. Normally, you only have to deal with yourself, like if you screw up or whatever you unravel it and deal with it. When you’re a band it’s kind of like when your headphone cord gets tangled with your computer cord, your phone charger and you’re like “well this is a lot harder than untangling just some headphones” but the great side is that we’re constantly rubbing against each other creatively. Even when you have writers block you don’t really cos there’s four of you so you’re able to work it out between all of you.

That must make the job a little bit easier, writers block is the worst.

It’s like running a ship, one day I’m holding the sails while one guy steers it, so everybody has a different job but it’s great to know that the other guys are there and are part of the experience with you.

You’re kicking off your tour at home in Chicago, are home shows your favourite to play? It must be surreal to play there and then embark on a world tour, kind of like the first day of school

Home shows…uh…. they’re stressful cos a lot of people show up with lots of expectations and you don’t wanna let them down. At the same time they’re great because it’s a well-worn in thing, you feel comfortable to play new songs. A hometown show feels good.

How has the reception been to the new songs?

The new stuff has been kind of polarising.  With ‘Champion’ its easier to digest because it was a natural progression from our last album. ‘Real One’, it’s anthemic and interesting; lyrically, it’s our second or third of what I would call “a love song” but it’s not cos it’s neurotic. It’s the idea that the person you’re in love with talks to their therapist about you.

In terms of the new songs you’ve been writing, you say they’re a departure from your original style, does the potential reception of your fans change the way that you write songs or do you just go with your gut instinct?

We go with our gut, the great way about the world is that you’re able to interact and see what fans have to say. They’re part of the package and that’s great, that’s customer service and that stuff matters but we’re not a customer service artist, we’re not making music by someone else’s design. There’s a famous Henry Ford quote, “if you asked what people wanted before the car they’d say a faster horse.” Like The Clash and Metallica, there was a point where I felt like “they’ve changed, this sucks” but now I appreciate them as 30+ year olds, the fact they changed and grew, it gave them longevity.


If Fall Out Boy got the chance to soundtrack any film what would it be?

I think something we would absolutely kill is a movie like ‘Drive’. The mood of Fall Out Boy is a little bit off, but it’s pop so I think we would do well with a cult classic. Or maybe a film like ‘Say Anything’ which is super stunted emotionally.

You were in the UK for Reading and Leeds last year, this is the ultimate dividing question for a lot of Brits, which ones better out of the two?

The best part about being American is that we don’t have an attachment an area or the culture of an area so it all depends on that moment and what was better. I think for us we had a better show at Reading, we had fire dancers. We performed okay at Leeds but it was the first show after rehearsal and I think we had broken it in by the time we got to Reading. That being said, we’ve had some great shows in Leeds. One time we played and the entire sound system went out in front of 20,000 people. It was one of those magical moments that when it all came back in, we were all together and that was pretty special.

The most magical moment for me was seeing Daft punk at Lollapalooza when they were doing the Pyramid. People always talking about having spiritual moments at gigs but I’m always like “what the fuck are they talking about?” until them. I also saw The Refused during their mod era, that might be the best live band I’ve ever seen but at the time I didn’t know it.

Do you have any dramatic rider requests?

Guacamole from a local Mexican restaurant

‘Mania’ is set to release in January, is it finished or are you still working on it?

Still working on it! But we’re good for January. Famous last words…

How different is it from when you started working on it to now?

I think lyrically it focuses on the neuroses of everybody cos for me this is something I couldn’t understand when I was 22 because everything I was feeling then was big emotions. The neuroses make us all parts of humanity at large. Like for me, there’s nothing I love more than when someone texts me that I have plans with that I was dreading, and they say “I can’t come”, I’m like “yes! This is so amazing!” That’s what connects all of us. Glitches and errors make us human, everyone has them, even Beyoncé. We headed down one road with the album and it was really specific, we were trying to make one kind of song but it didn’t feel like it was what me or Patrick really wanted to be doing but we both thought that was what the other wanted!
We’re a weird band, we’re in pop culture but also in the rock scene and I think that’s just the way we’ve got to do it

You’re pretty famous for your wordy song titles, what’s your favourite one of all time?

Probably G.I.N.A.S.F.S (Gay Is Not A Synonym For Shitty) and I think it really holds true today, like people will just go “that’s gay” and that’s not cool, it’s important to use language that’s non-offensive to other groups and I’m really proud of that one.