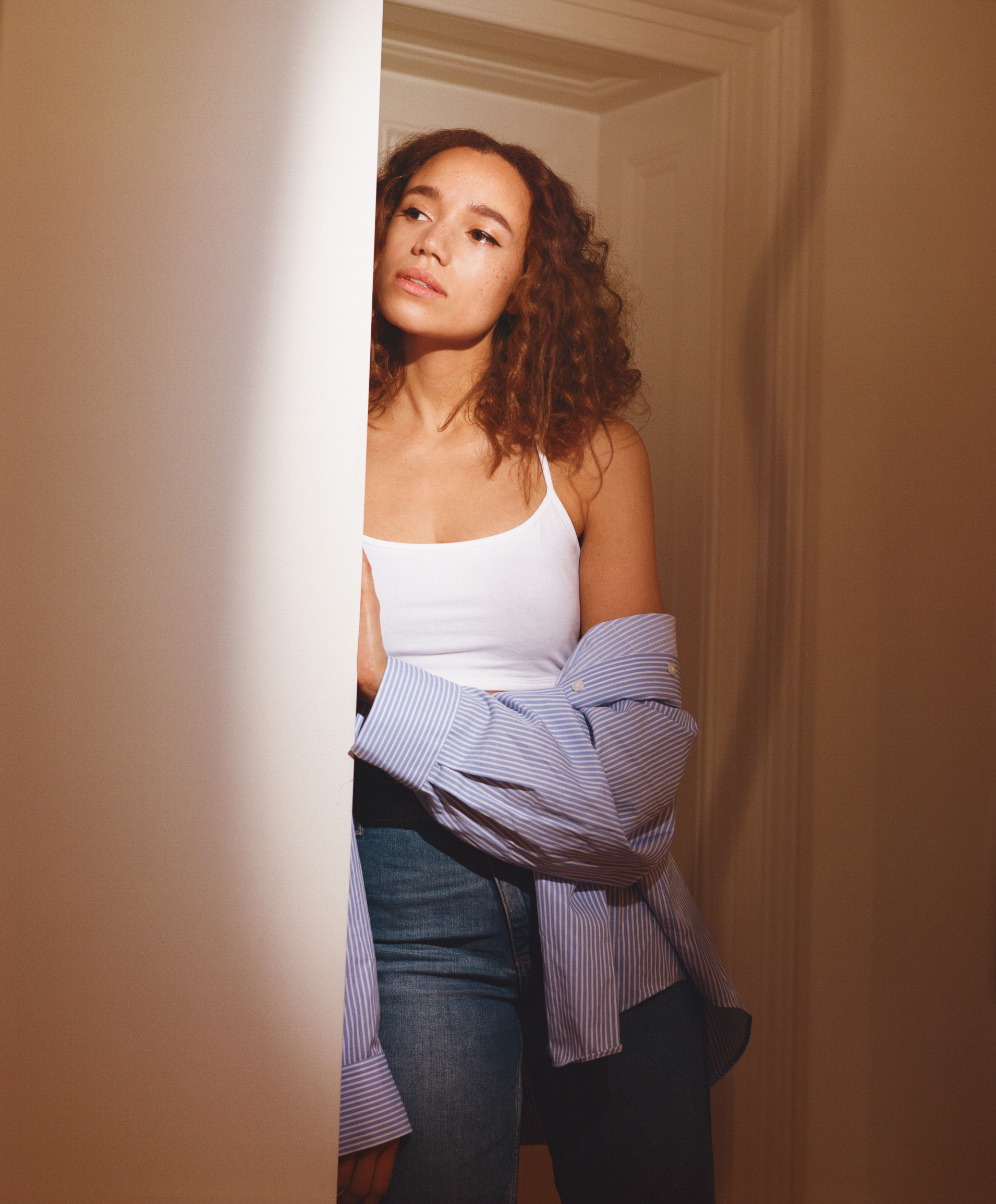 South-London’s JONES returns with the mesmerising new single, Around.

First breaking into the music scene with 2016 debut record, New Skin, JONES has undoubtedly proven herself as a talented vocalist and songwriter throughout the last few years. Her latest single, Around, is the next evolutionary step for the artist, It’s summery, soulful and features a collaboration with musician, Nardeydey. The track also offers an insight into what you can expect from JONES’s new forthcoming EP, Blue Sunshine, which releases this September.

1883 Magazine caught up with JONES to discuss the new single, writing sessions, and positive affirmations. Hey JONES, how did you come to work collaborate with Nardeydey on your latest single, Around?

Yes, definitely. So I’ve been working with a really talented producer called Oli Barton-Wood across this first single which is a part of an EP called Blue Sunshine, and all the productions is a collaboration between him and myself. And he actually is quite connected within a certain musical network in South London, and he actually, once we started working together he recommended that we meet her and I, nardeydey, and we had a session. We actually worked on a different song together and then we just, it just kind of works, she’s very sweet, incredibly talented, and I ended up writing the song around an instrumental where she’d been playing guitar. So then she came back into the studio with us, and did some beautiful vocals and a extra lovely guitar solo, so it all happened in a very organic way. We had a friend in common sort of connection.

The single is taken from your forthcoming new EP, Blue Sunshine, which is out this September. Tell us about the creative process behind this new body of work, how long did it take to make?

It was a lockdown project. I had previously written a bunch of songs that was going to be an album, but actually, you know as I’m sure a lot of people did during the crazy change of circumstances during the lockdown, I kind of had a change of heart. I wanted to kind of start over musically, so in the confines of my bedroom I started this project, I had the title Blue Sunshine from a little while ago and I always wanted to make it into something but I didn’t know what it would be. So I just started making some demos in  my room at the height of lockdown. Then when we were able to go and do things outside, I took them into the studio with the producer, Oli Barton-Wood And the EP came together in a few months really it was quite an intense period, I kind of needed that. I needed to give myself that to do obviously not being able to do any live dates or other work that you do as an artist with people or shows or anything, so it was a pure lockdown project.

And it’s kind of talks about a range of things ranging from mental health… that’s kind of what Blue Sunshine is about. It describes depression in a nice way, I suppose. And then obviously the whole wave of the Black Lives Matter movement erupted and there’s a song on there called “Uniform” which was heavily inspired by that. I wrote a few songs about that but as a person of colour I felt that I needed to…my mind was just so much in that place I was just kind of pouring out with me so it makes sense that there’ll be a song about those issues as well.

You mentioned on social media that Steve Lacy’s tune Dark Red inspired the EP. How so? And are there any other songs or artists that have influenced your new music?

I’m a huge fan of Steve Lacey I think he’s effing cool, I just love everything he does. I love his interesting like jazzy chord progressions, but it just sound so effortless. But first I actually heard that song a while ago but I revisited it during the lockdown and I was just obsessed with it. I would put it on in the morning to get me going. As an artist there’s this thing that says ‘steal like an artist’, you kind of try and listen to lots of different things and hope that some of it filters into your creativity, somehow. So I’m just a huge fan of his music. And other songs, I believe he’s a Swedish artist.  He’s called HNNY and he’s got some really cool songs, there’s one called “Cheer Up, My Brother” which I’ve listened to quite a lot, and also a lot of Roberta Flack as well.

Writing sessions with other artists can be a really helpful process when trying to come up with new ideas, last year you were in the studio with Franc Moody, and you’ve also written with Aquilo in the past. How do these sort of sessions come about and what goes through your mind when you go into a room with a new artist you’ve never met before?

They come through organic connections like the one I mentioned earlier, they can come through, you know, you always work with managers, labels, and music publishers sometimes it comes from sort of a connection that a manager might have. Nowadays, social media is a huge one, sometimes you can just directly like start following the person, send them a message and make a connection that way. Honestly, it’s normally quite nerve wracking going in with someone you haven’t built up that musical trust with. But there’s always like a half an hour icebreaker where you just talk about life and then you just kind of try and start something. I feel like everyone feels vulnerable because with creativity, you have to make yourself very vulnerable. There’s no point doing it if you’re just going to play it safe.

Kevin Parker (Tame Impala) is also another inspiration of yours, you mentioned in an interview that you sometimes reference his music when working with producers, what sort of elements do you refer to? Also, what are your favourite Tame Impala tracks? Surely you should persuade your management to try find a way to reach out to his team!

I know I agree haha. It’s borderline obsession now I think I’ve mentioned it so many times. I referenced just the chord progressions, it always seems so dreamy and otherworldly. I reference his drum sounds and his synthesises. He sets the bar very high for his creativity and musicality, so I just, I love just the general vibe to just set the tone for our direction.

On Facebook you posted the quote “the sky grew darker painted blue on blue one stroke at a time into deeper and deeper shades of night” from the Japanese writer Haruki Murakami, what does this mean to you? What quote from yourself would you like to be known for in the future?

Well I mean, I’ve actually read so many of his books, I can’t remember which one that is from now, but I’d had it written on my phone, and I feel like with social media there’s the temptation or the silent pressure to always be posting things about yourself. Especially when you are, you know, an artist or, you know you’re promoting something like a single. But I’ve just wanted to share more from other people’s creativity whether it’s a photo, like a really cool photographer or you know line from an author, or a thought or idea.

I’ve been actually gathering a few different things and quotes that I will be sharing so it’s not just a picture of me and my face all the time haha. So that was the thought process behind that and then my quote would be…I think it’s important for everyone to remember to ‘be kind to yourself’. And so that would be my quote, ‘be kind to yourself’.

You’re a fan of the books by Dean Radin where he discusses Quantum Reality and entanglement….so i want to ask, are we living in a multiverse? What are your thoughts on this?

Yes, I love the fringe science and the woowoo stuff, I’m all about it. God, I’m not educated enough to comment on that. I liked what Elon Musk said when he explained that we are living in a holographic universe, and that this is a hologram. I would have to rewatch it to try and even begin to explain how that works. But sometimes I do think this is all an illusion, and a strange game of life. So, yeah, maybe.

Having released your debut album, New Skin, back in 2016, is there any certain advice you would give your younger self?

Following on from that question, how long will fans have to wait until album two? And what have you been up to in the last few years in general besides writing music?

I cannot give a date on the album because that is still… It’s kind of as I said, I went back to the drawing board. But there will be a lot of music coming out, whether it be in an album form or not, I can’t say. They’ll be a lot of stuff coming this year.  and what else have I been up to? Oh god, just being a human, learning from my mistakes, being there for my family, enjoying running during lockdown, being a nerd and reading about nutrition and biochemistry, I’m quite interested in in science and things like that, and how different molecules can be very healing and regenerative, that was my lockdown, passion. And yeah, just trying to learn and grow every day and make good decisions.

Have you got any live shows planned for this year or next year?

Yes, there are a couple of shows in the works. I don’t want to say anything before things are confirmed but definitely towards the end of this year. Once the EP is out, there’ll be at least a couple of shows. No one really knows what we’re doing in terms of safety, so I  wouldn’t want to do anything until it was all tried and tested. But yeah, it’s been a huge part of my life that have missed, and hope to reinvigorate, for sure.

To round things up, what are your positive affirmations or mantras for the next chapter of your career?

Well I think a big one is to just, I think especially in this social media era that we are living through, you can see some stuff on the internet and you can and it definitely can make me feel bad about where I am or what I’m doing or not doing. So just a very simple one of, ‘I am good enough’ is a really important one I come back to. I tend to steer towards stressing and anxiety sometimes and being quite indecisive, so I have to tell myself that ‘all is well’, I find that very calming.  as well. And I find that very calming.

Listen to Around by JONES below. Follow JONES @iseejones