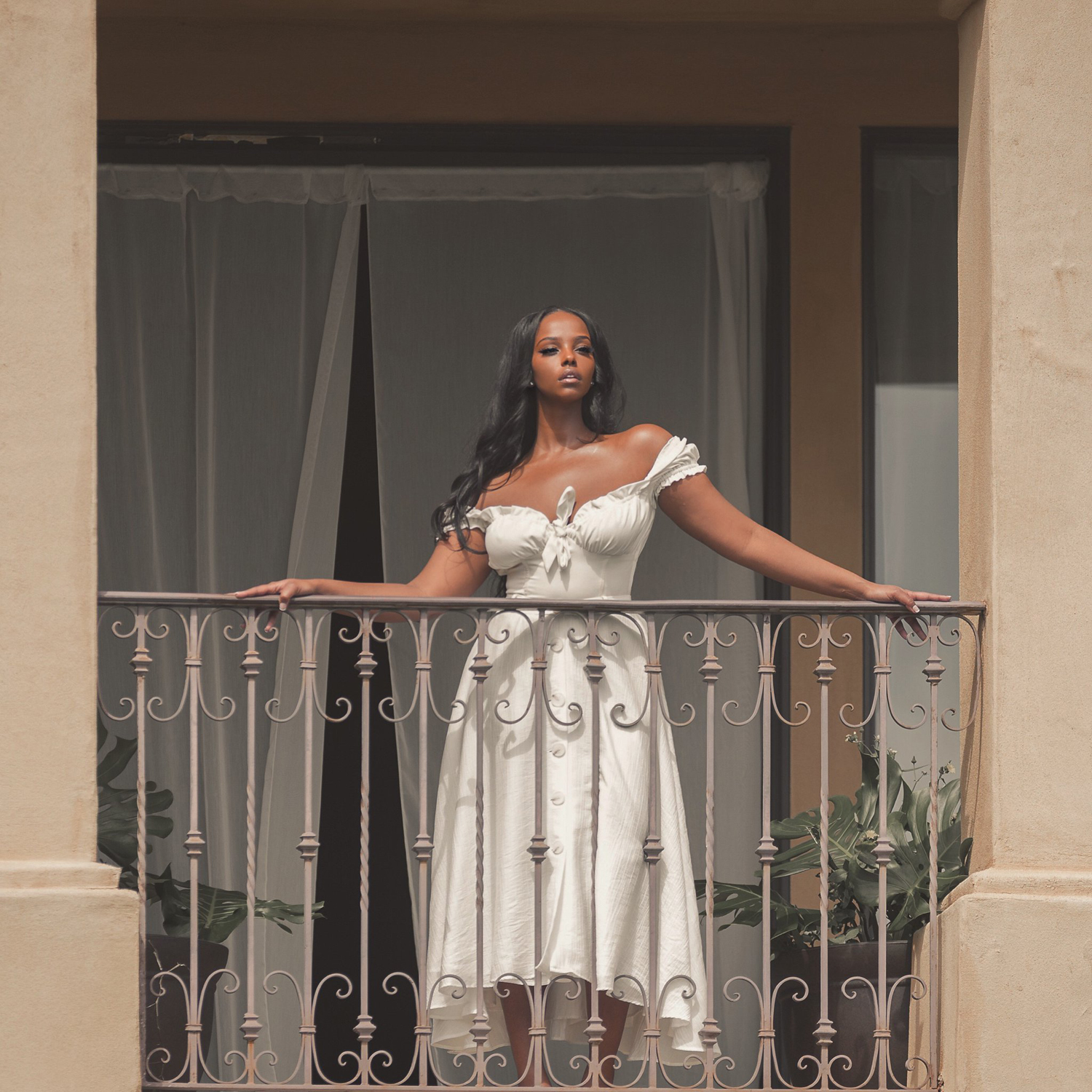 Somali-Canadian R&B artist Amaal finds her power by being vulnerable in her music & lyrics.

It’s in that open & truthful space where she heals her own wounds by creating music that helps to break down barriers and encourages other women to connect with the universal experiences she sings about. Amaal’s lyrics also deeply intertwine her experience of being emigrating to Canada from Somalia and the influence the experience had on her as an intuitive teen with a passion for poetry and the written word.

In her new EP Black Dove, Amaal sings about the relationships that have taught her important lessons. Coming and Going, her latest single, tells the all-too-familiar experience of a relationship with no real status and only receiving tiny slivers of another person, but wanting to stay anyways. It’s in songs like these where Amaal has created a community of women who can, in a way, talk about things that might make them feel embarrassed or insecure about. It’s Amaal’s way of saying we’ve all been through it, so we should all be more open with one another and help each other through the heartache.

1883 had a chat with Amaal about how music can act as a healing experience, how social media has helped her career from the beginning, and how she incorporates Somalian inspirations in her work. You started singing when you were 16. What made you want to pursue music?

Sixteen was when I had my friends tell me, “Oh, you have a really nice voice,” and people started really commenting on it. What made me really start doing music was actually poetry, which was something I was already writing. When I started singing, I realized I could combine the two and I felt the message of what I wanted to convey could connect to people a lot more. I remember the first song I wrote and how it soothed my soul. I shared it with my family and their reaction was so positive. That is when I decided I want to do this, I want to be able to continuously and be in this space of creativity. Also, having people connect with what you’re writing and what you’re doing is just really encouraging.

Your EP Black Dove was released last month. What does this collection of songs mean or represent to you?

I would say that the songs are all extremely personal. I was in a space when I was doing music, There was a lot of amazing things I felt like I was talking about, but I realized the one thing was missing from my music and it was me, my personal day-to-day stories on relationships, heartbreak, betrayals. All of those stories I was going through but I was really afraid to, to share because out of my girlfriends and my family, I’m the strong one everyone leans on. I sort of fell into that role and, because of that, it truly limited my ability to share those details that I’m going through in my life and relationships because I felt I had to be strong. I’ve now learned that being strong is being vulnerable, honest, being open about the moments that are somewhat embarrassing or make me feel insecure. I just remember once I started sharing and talking about those things, it was like a floodgate of emotions that just came running out and I felt so empowered and so proud of myself. The EP is really focused on past relationships and really detailed things of what I went through. Would you say creating music has helped you heal? Do you typically get your inspiration from your own experiences?

Definitely has helped me heal. I realized that there is power in vulnerability and it’s really allowed me to see the stories that we go through as women are very similar. A lot of the people that have been supporting me for a very long time have sent so many messages that have reassured me that this project is something people are relating to. Many have said “Oh my gosh, this song feels like it could’ve been written for me” and “I can understand the feeling you’re talking about,” so just to hear that has normalized those experiences for me. It’s nothing to be ashamed of it. The most healing thing for me is recognizing my experiences have contributed to the woman I am and the woman that I have become. Music has allowed me, in a way, to give advice or counsel as a way to console and help other women who have experienced similar situations. It’s been a very very empowering experience.

Your latest single Coming and Going is incredible and I loved the music video for it. Can you tell me the inspiration behind the single?

Thanks so much, I loved that video too! It’s about a situation where there was not a commitment being given to me in the relationship that I was in. There was a lot of unavailability, emotional and physical at times. It was extremely confusing, but what was more confusing was how I felt complacent in a way. I was frustrated but happy at the same time to get a little bit of them. It wasn’t the best experience but the crumbs that I did get were so good, that I put up with it. The song asks  “Are you coming? Am I going?” “What is the resolution?” but also feeling conflicted because the little moments that they are around make you so happy, so it’s really emotional. It also represents a situation I feel I needed to experience in order to realize I will never settle for a situation where I’m just accepting these crumbs of a person. I know I deserve more and I’m worthy of better. I needed to pick me in the end and that is what the music video is about; showing the struggle of the push & pull and how wasting your time in a situation like that isn’t beneficial at all. The only benefit of it was the wisdom and experience to move forward. There are lots of symbols in the video and lots of moments of contemplation. There is no male in the video, I wanted it to be really obvious that I’m picking me.

Social media has been to your career, starting as an independent artist and gaining lots of love from fans & critics helped you get a record deal. Do you place a lot of stock in social media still when it comes to promoting your music?

When I first started doing music it really, really was 1,000% pure love of just making it. I wasn’t aware of the ability to make it into a career was possible to me. I don’t know why, especially coming from Toronto where we have Drake! [Laughs] I realized it makes me just really happy, so when I was recording stuff and putting it on YouTube I started getting reactions from my music that were beyond my wildest dreams. I remember not being able to sleep because it was so overwhelmingly amazing. I was in utter shock. Since then I believe social media is a really helpful tool. It changed a lot of lives for artists and made things a lot easier, but it also gets harder every year, too, because new music is constantly getting added to streaming services every day. So, although it’s like such an amazing tool, it can be a little bit difficult to not drown in it, too. What I learned is the importance of visuals and being able to tell your story and tie it in with your music. It sets you apart.

I know you were born in Somalia and emigrated to Toronto when you were young. How did this influence your songwriting or music in general?

Somali, actually, is a country that has birthed a lot of poets and one notable one that is well-recognized is Warsan Shires. She did the poetry Beyonce was reciting in the Lemonade video. So our nation is naturally well-known for being a nation of poets. Our language is extremely poetic, very Shakespearean, with lots of metaphors. It’s just how we talk. Poetry was a natural right of passage for us to explore and that immediately helps you be able to think in that space, which has helped tremendously. Even further, because of the experiences that we’ve gone through of coming to Canada as refugees, I grew up in a neighborhood that was predominantly of folks that were from similar walks of life. So I felt like when I first started doing music, I took from all of our experiences. I never heard music that spoke about our stories, so I wanted to. At the beginning a lot of my music was about coming to this country and all of the situations that were happening back at home, so it was very political, very conscious, and there was always the message of hope and resilience in there, too. Although now I mostly write and sing about my own experiences, there will always be an underlying message of hope in my songs.

Who are some artists, musicians or other poets that have inspired you in your work?

Warsan Shires, for sure. I read her poetry over and over and over again, and every year it means something different to me. She’s somebody who is able to tap into a place where her writing can resonate with anybody. It transcends all age groups and religions. When I first started listening to music I fell in love with Alicia Keys and Lauren Hill. I loved Aliyah; I always thought she was incredible and I loved the tone of her voice, it sends chills down my spine. Nina Simone, she was able to talk about the issues that were happening and use her voice as a pillar for black women; there was always activism in her music.

What else is coming up for you?

With the music being out there now, I really felt like I was opening the faucet with the emotions coming out and the stories that I’ve been struggling to tell. Now I’m at a place where I feel so fiercely positive and in love with the person I’m becoming and the journey that has brought me here. There is a lot of music that I’ve already created that hasn’t been released yet that I’ve been saving for the next project I’m working on. I really want to push my boundaries. I want to challenge myself both musically in my writing but also physically; I want to be able to incorporate some things I’ve been dreaming to do in these videos, and push myself artistically with my movements. I’ve just been glued to my vision board the last few days because I need to see it visually first. I’m really excited, I just want to dive in deeper and share more of these stories.