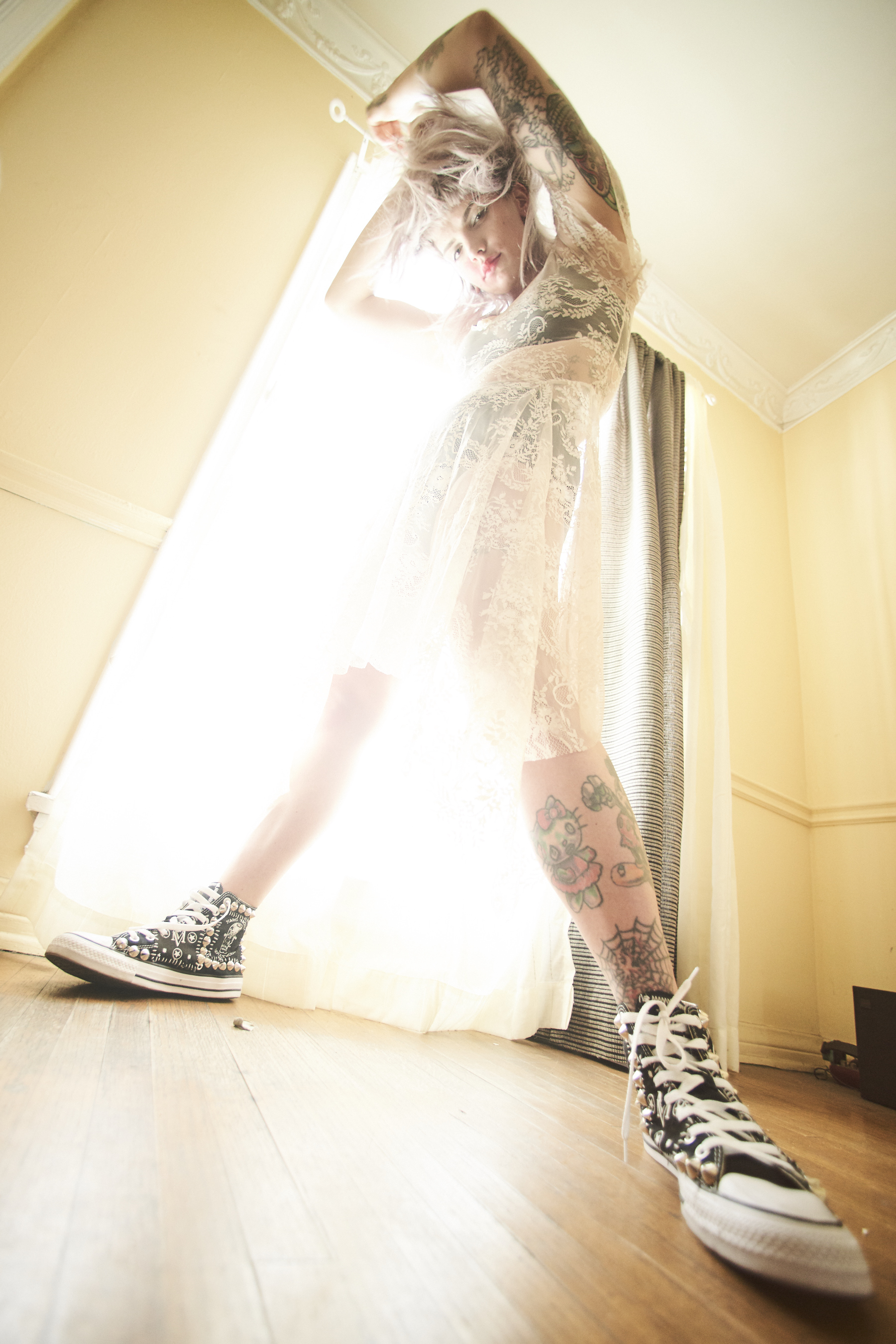 After being in a few metal bands, like Winds of Plague, grunge-pop artist, Alaena, has embarked on her solo pop career.

Not only is her music a euphoria-inducing experience, but she also has an out of this world personality. Her latest single “I Wanna” is a song about frustrating love and the vicious cycle of mixed signals between two lovers. An angsty, fiery mix of Marilyn Manson and Britney Spears, Alaena will have you jamming and dancing along.

The Pittsburgh-native singer is planning to release new songs every 5 weeks leading up to her debut EP, UNGUILTYPLEASURES. She’ll also be dropping brand new music videos, new merch and tour dates for the US.

We spoke to her about how she got started in music and her journey ever since. I always like to start every interview by asking how you are doing – how are you, Alaena?

I’ve been doing great! Been taking on New York for the past three days and I have no clue where I am, or what I’m doing, but somehow we’ve survived. It’s been crazy.

Where did it all start for you? When did you decide that you were going to be a musician?

It started at multiple different areas in my life. I feel like the only thing that fuels my soul is music, and I had a hard time figuring out who I was when I was younger, but I knew there was one thing that gave me that feeling of unity and that was creating music and writing music. That’s always where my heart and head have been. Played in a few bands, toured the world, and it was amazing and I don’t regret anything, but nothing I could really call mine so I tried to make sure that with my new project it was something I could feel 100% about doing because it was 100% mine. When I was younger I started playing piano, and creating girl groups with my friends, and I was like this is it.

Any favorite records you had growing up?

Yes! I’ve gone through many eras of my life and I like to pull influences from all of them. When it came to my mom, it was Midian by Cradle of Filth. You probably have no idea what that is, but that’s okay because that was one of my biggest influences. Every Britney Spears’s ‘90s to 2000’s albums fuels my soul. The No Doubt records…my mom listened to a lot of music so it was always in my ears.

What inspired “I Wanna” and what made you decide that this should be a single?

The song had teetered back and forth from a weird place in my heart since I originally wrote it about a guy I was seeing where we kept throwing mixed signals at each other. I was head over heels but we never ended up together in the end. Now when it came time to release my next single I really felt like I could put “I Wanna” out…because fuck that guy! The song is so great and no man, emotions or not, is holding me back! I was far from sulking over him, and I was far from allowing the song to make me want him more. I had a completely new outlook on the situation.

You’ve got a music video coming out for your upcoming single “Holy Mess.” Can you give us any inside info on what the music video will be like?

The music video will be out in October. It is my masterpiece! I filmed this with the help of some of my best friends in the 120-year-old home I grew up in. It is giving some beautiful, spooky vibes mixed with some controversy…just in time for Halloween….and the presidential debates.

If there’s any movie trilogy or series you could have one of your songs in, what movies would those be?

I am not a movie buff. I never finish movies because I get so ADD and want to go do something else. I’ll get inspired by something and want to go write a song. I feel like I need to be doing something. I do love Stranger Things. Last week I was trying to write a song inspired by it because I love the synth and the vibe. One of the only series that really brings me in. Love the camera angles and the way it’s filmed.

What’s been the biggest change for you, coming from a band and now having a solo career?

The biggest change for me honestly is having to figure how who I am as a person. It’s a little more personal, there’s a lot of changes physically and visually from what you see in a metal band to a pop artist. But mentally the biggest change has been accessing my own emotions. I was playing keyboard so I wasn’t writing any lyrics, I wasn’t putting out what I felt, which is symphony-esque orchestration and a lot of angst. I wasn’t able to access my emotions as easily as I can now when I’m writing pop music. There’s been a shift in who I am mentally. I went all the way to the bottom, sunk so low and then climbed my way out. It’s been a rollercoaster ever since because now I know how I feel and to be able to be on top of it is a blessing. I feel much more grown and liberated. To somebody who’s never heard one of your songs, how would you describe your music?

The goth Britney Spears is my favorite way to describe my music. I love to think that I’m the lovechild of Marilyn Manson and Britney Spears. If you put those two together and imagine going to a strip club, but having it be a rock strip club. Having one section that’s a strip club, a drag show and maybe even an arcade. New York City, watch out.

If you could collaborate with another artist of an entirely different genre who would that be and why?

Totally out of my genre would probably be rap and country, so Lil Nas X hits out of the park with both of those genres at the same time.

What goes into writing a song? Where do you find your inspiration?

Most of my inspiration comes from what I experience and what I go through. I don’t go into songwriting with a plan, I don’t go into it saying I’m going to write this or that. That’s why I don’t think I could be a songwriter for someone else because that’s not how I write my music. I sit at the piano and whatever comes out of me, it helps me understand myself. It’s like oh shit, that’s how I’m feeling right now, those are the words coming out of my mouth and that’s how I’m feeling about this situation. It’s not me pretending I’m going to write about this or that. It always comes from what I’m feeling in the moment, but honestly most of the time I don’t even fucking know what I’m feeling in that moment but the song helps me figure it out. It’s like I’m always confused but the song brings so much clarity.

To somebody who’s going to go see you perform live, what should they expect at the concert?

Aggression, energy, arrangement of emotions. I naturally have this aggressive tone to my voice, but I also have a sweet, soft spot. I only know how to perform. I want people to pound their fists and jump around. I want mosh pits. I want them to have fun and not just be on their phones. I don’t want them to just watch, but to feel. Everything live, not just have a backing track and singing along to it. I want an experience. Who are your biggest inspirations for fashion/image?

I really try not to mimic anyone’s style. I just kinda throw some things together and go with it, but I tend to pull inspo from all over the place. Some of my mental/inner go-to’s are David Bowie, Marilyn Manson, Courtney Love…colorful and also very dark – just like me!

I’ve been working on an EP and I’ve been talking about it for a while. Everybody keeps asking when is it finally going to come out? It’s not because it isn’t ready, but I’ve gone through so many of the songs that will be on the EP and I don’t feel like my fanbase is ready yet. I want my fanbase to be at a certain point where I can put out my EP to the most amount of people I can. I want it to get to a certain point where if I put out a body of work, it will be fully digested by the amount of people that I want it to be. I want my body of work to be heard, so, for now, I keep releasing singles. My fans get that and they want it to grow a ton as well so everyone can relate.

Now a fun bonus question. What cartoon character are you?

A mix of Daria from MTV and the Tasmanian Devil.