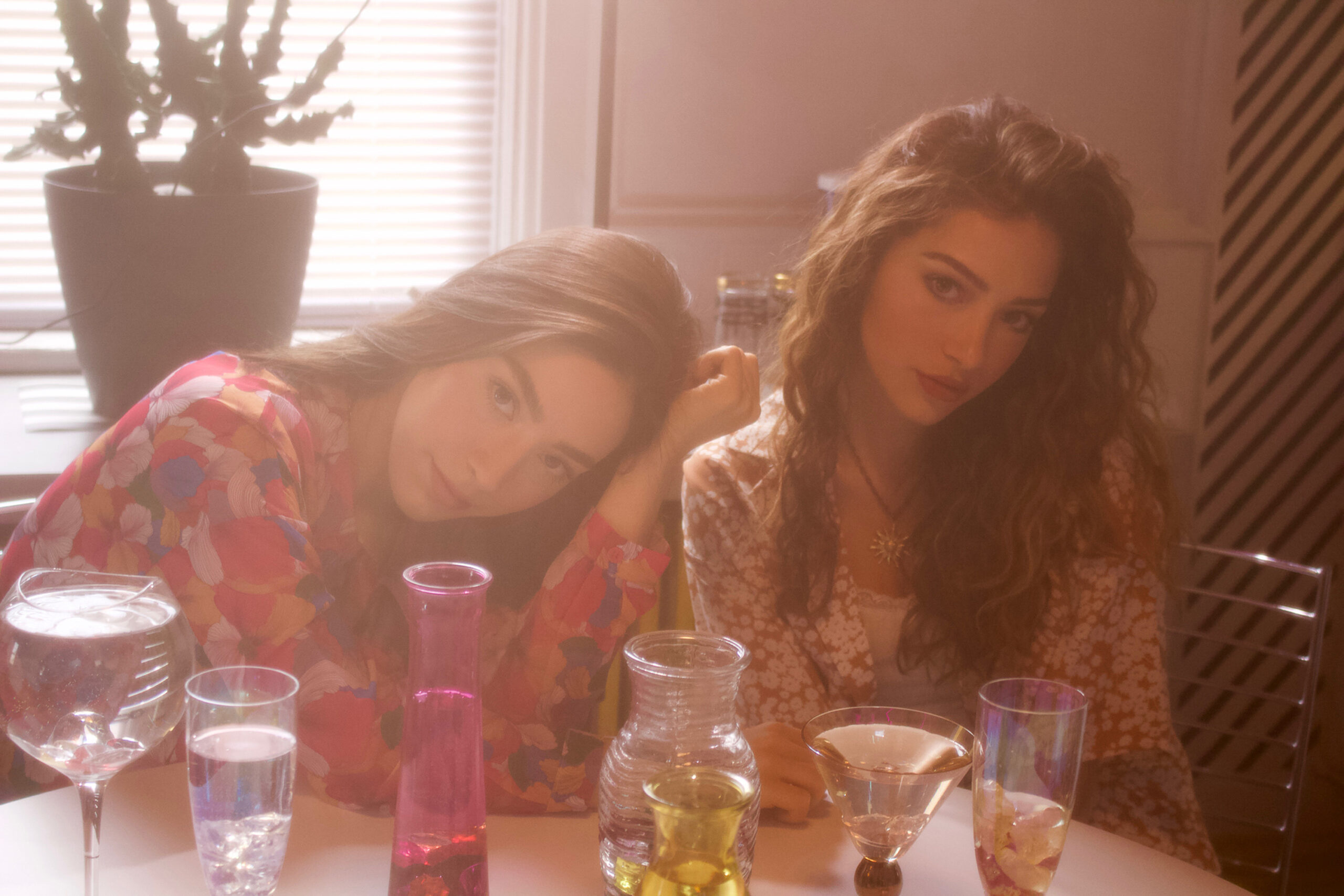 If you read the credits for Are You Listening? — the debut album of twin sisters Carly and Martina — you’ll discover that the Chicago natives wrote, sang, produced, and mixed every track. And they’re only 18 years old.

The up-and-coming pop duo shatters standards in a male-dominated industry where many artists do not direct their own brand, let alone perform the back-end work of album-crafting. Carly and Martina’s technical and creative prowess dazzle on Are You Listening? which features meticulous production, stick-in-your-head hooks, and beautiful harmonies that spotlight the young women’s palpable bond. In many of their lyrics, Carly and Martina boldly backtalk boys and bullies, the latter of which was the subject of their breakout song ‘Make Me Happy’, released six years ago.

On the eve of album drop day, these self-reliant, forthright, and spirited young artists chatted with 1883 about learning technical skills through trial and error, giving a TEDx talk at age 15 and crafting authentic pop music from their basement. You both personally wrote, arranged, produced, mixed, and sang every song on Are You Listening?, and are the creators and directors of your own brand… How does your identity as confident, independent, and self-reliant young women in a traditionally male-dominated industry translate to your lyrics?

When we’re writing songs, we’re not trying to write lyrics that are confident and independent. We just write what we feel, and we write what’s true to who we are. Who we are happen to be independent, confident women so I guess that’s how our identity ties into our lyrics.

In 2014, you released your breakout, anti-bullying anthem ‘Make Me Happy’ as middle schoolers. Now, you’re releasing your debut album Are You Listening? as 18-year-old high school graduates. How have you evolved as musicians in the past six years as you’ve grown from pre-teens to young adults, and how is this evolution reflected in your new album?

It’s been six years since ‘Make Me Happy’ — a lot changes in 6 years. Not only did we grow up personally, but we listened to more music, worked on our skills, and finally started to produce ourselves. Our new album is our first completely self-created project where the only influences were what we’ve gone through, listened to, and practiced for. It feels like every single piano lesson, life experience, and setback in this industry prepared us for this album. Ultimately the evolution is just us six years older, and we think that comes through.

It wasn’t bullying that was the catalyst; it was how we were feeling about it. We always turned to music when we were upset about something, and that time it just so happened to be about bullying. Our experiences with bullying have taught us to be kind — we know what it feels like to be hurt by others, so we are that much more motivated to be extra kind to others. It also reminds us to be authentic in our music because that openness to what we were feeling started our career in the first place. We’ve also run different music programs throughout the Chicago Public School system because music was there to help us, so hopefully, we can be there to help somebody else.

In 2017, you gave an excellent TEDx talk about bullying and the beginning of your music career. What were your goals for that TEDx talk, and how did you decide to integrate live music into it?

We actually hadn’t even thought about giving a TEDx talk until we were invited to do one! We were performing in New York one night, and the leader of the TEDx talk in Chicago just happened to be in the audience. After hearing our music and our story, she invited us to give a TEDx talk about how we took an experience with bullying and turned it into a career. Our goals were just to have fun and share our experiences! We were fifteen and had never given a speech to that magnitude, so it was an incredible process to be part of! We’re musicians at heart, not speechwriters, so that’s why we incorporated live music. Arranging and producing and mixing, oh my! How did you both learn to do the behind-the-scenes work of music-making, and what are your individual strengths in the album-crafting process? For example, is one of you the primary songwriter, while another spends more time producing and mixing the albums? Or is each responsibility split evenly between you both?

We learned by trial and error. It sounds crazy, I know! We just walked downstairs every morning and didn’t leave until the next morning, or until we came up with something we were proud of. It was really frustrating and scary at first because we didn’t know anything. It was a huge learning curve of just pressing buttons to see what they did, but eventually, we found our footing. Once we started getting the hang of it, we started really finding our sound and having fun! Producing is only half the battle though. Mixing is an art in itself, and we had to learn that too! We spent about 10 days working nonstop on perfecting the mixes so that they would sound as professional as possible. We both take on different roles, but we also both have a part in everything we do. Because we did it all together, it’s hard to say who shined where, so I think it’s best to say that each responsibility was pretty evenly split.

You describe your music as ‘not bedroom pop, basement pop’. What, in your minds, is the distinction between ‘bedroom pop’ and ‘basement pop’, and how does the difference extend to what you’re doing lyrically and sonically?

For us, the difference is that basement pop is all about the bass — aka the basement. Like bedroom pop, it has a certain ‘undone-ness’ that is extremely edgy and something we love. It has the same raw intimacy that bedroom pop has, but it has more bass and is slightly more focused on the groove. Also, we made it in our basement, so it’s literally basement pop. 🙂

You often cite Lana Del Rey as a major inspiration for your work, and you compare yourselves to her when describing your music. What, if anything, is the relationship of your new song ‘Honeymoon’ to Lana Del Rey’s 2015 album and track of the same name?

There is actually no relationship between the two! We love her for her vocals and for her stage presence, but we don’t use her as an influence for her lyrics or for her titles. It’s a coincidence for sure, but it ends there. What inspired the ‘Your Song’ video, and how did you create a music video in quarantine?

The ‘Your Song’ video was a cross between us wanting to tell our story as female producers and wanting to pay tribute to one of our favorite bands, The Beatles. The Beatles broke in America on The Ed Sullivan Show, and we wanted to recreate that. However, instead of having a backup band and backup singers, we played all the parts, symbolizing how we are playing all the parts in our own careers right now. A little Easter egg is that we’re wearing our mom’s old suits from the ‘90s as a homage to the powerful women before us who paved the way for us to have the opportunities we have today.

For Are You Listening?, I understand that you both are creating a visual album which highlights the work of other artists who produced work during the pandemic… Can you talk more about what makes this album visual and why you chose to craft a visual album as opposed to a purely sonic album?

We collaborated with artists from around the world to get a video of them creating an original piece of art inspired by one of our songs for every track on the album. The visual album is basically a series of music videos of art being created to our music! We chose to craft a visual album in addition to a sonic one because while we were making our music, we saw different colors and scenes in our heads. It was a very visual experience for us even though we were working with sound, and we wanted our fans to get that same experience. We’re also just genuine fans of art and wanted to support other artists!

Congratulations on your recent graduation from high school! Do you have plans to attend college, now or in the future, or will you continue to pursue music full time?

We definitely want to get a degree, but how and when is still up in the air. We’re going to ride this wave and roll with the punches and just see what comes next.

What do you want to be doing five years from today?

Five years from today, we hope to be continuing to make music — maybe not just for our artist project, but for movies and plays! We’re already making music for TV shows, but we’d love to do even more!

Check out Carly and Martina’s new album Are You Listening? below!