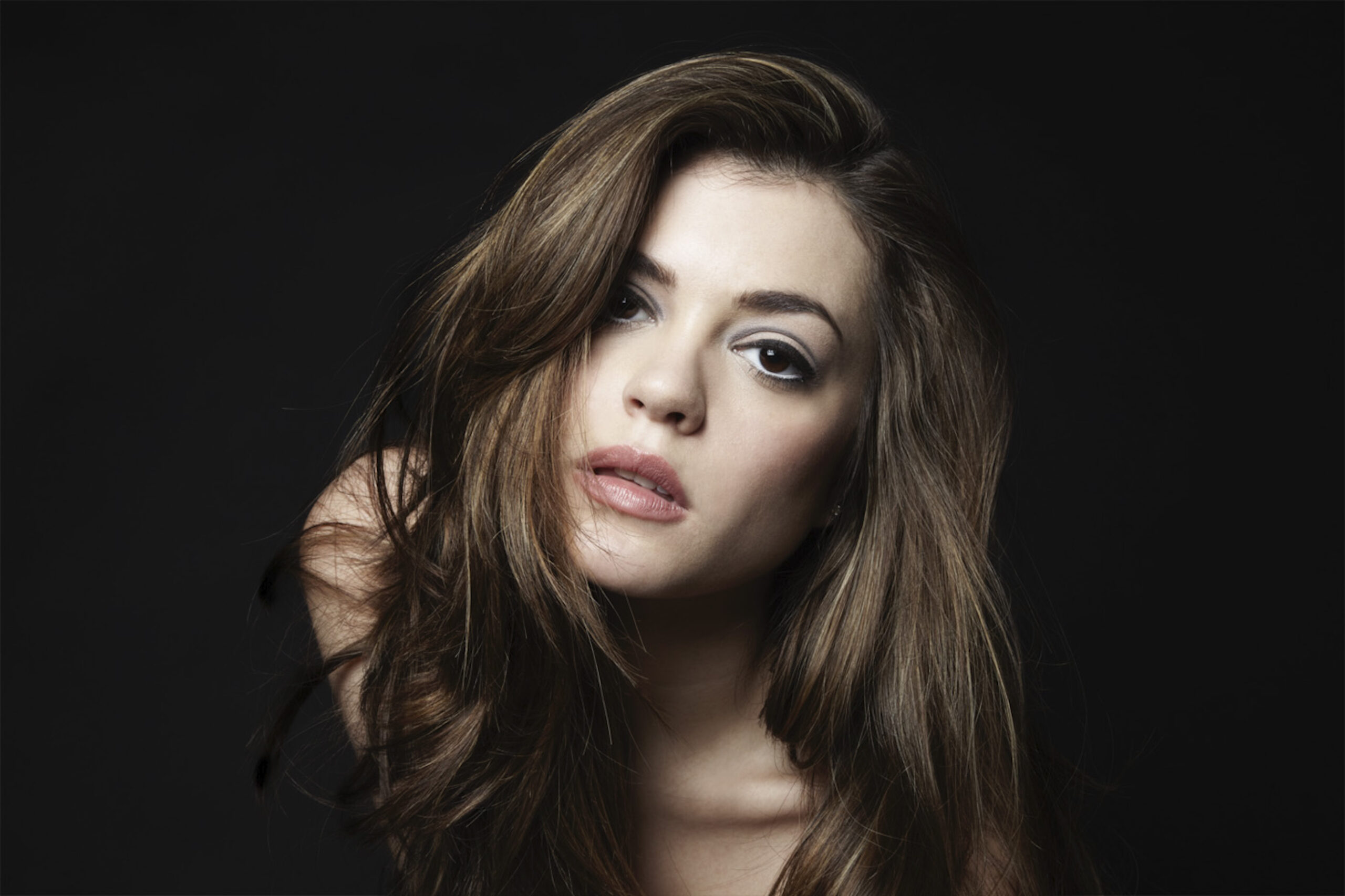 No other artist is bringing back a distinct blend of soul, funk, and 60s French into the 21st century like the multi-talented Iraina Mancini. Today, the London singer, songwriter, DJ, and model is premiering her brand new single ‘Shotgun’ exclusively on 1883.

It seems like music was always the career for Iraina Mancini from the start. Inspired by the 45s she would find as a child, she fell in love with the sounds of the past — anything and everything from Northern soul to funk to disco. Her follow-up to her 2019 single ‘Lovers in the Dark’ is ‘Shotgun’, a sultry cat-and-mouse track inspired by old French films and her love of Serge Gainsbourg.

We spoke with Iraina about her new single, her struggles with self-confidence, and what it’s like to be an independent female artist in 2020. Can I start by asking how you became a songwriter, how you honed in on your craft, and what was it about music that made you want to make it into a career?

I came from a very musical background — my dad used to leave his 45s laying around when I was growing up, so I used to raid his record box and find loads of old soul and ska and reggae and funk, like kind of 60s/70s stuff. Then when I was about 18 I used to DJ his records out in clubs. In between that I just started songwriting. I was trained classically to play piano so I had all of the bits and pieces and just started to put it all together and began writing my own stuff. I fell in love with it all! I joined my first band when I was 18 instead of going to university, much to the dismay of my parents! [laughs] We spent 4-5 years together as this electro-pop band and from then on I’ve been in other bands and such, but only recently started pursuing my own stuff. It’s always been in my blood.

How did you get into DJing? Is it something you always knew you wanted to do? It’s kinda like putting yourself on the other side of the table, in a different way than being a musician yourself; you’re playing other musicians’ music but making it your own.

Yeah, definitely. I actually started DJing because I didn’t hear much of the music I really liked in clubs and bars, so it was a bit selfish on my end! I obviously like old stuff, like soul and disco, and I was sick of not hearing that amazing music on nights out! No disrespect to dance music and current music and such, but it just wasn’t my bag! So I thought I’d bring it back. I would say I kind of fell into it and then off the back of that, I got a radio show which has been amazing to talk about the history behind my favourite genres.

With DJing you were traveling quite a lot — we talked briefly earlier about your trips to Toronto to DJ at the film festival and you’ve been to places like Cannes. How would you say those trips and seeing different audiences and places has helped shape you as a singer and songwriter?

The endless opportunities you get from DJing is amazing. No matter where you are in the world, there’s always a need for entertainment, to lose yourself, and to dance. There’s a load of appreciation for the music I DJ as well all around the world because it’s that classic, good stuff. I’ve been lucky to travel to places like Toronto and New York and Spain and you meet so many people and learn new things. Every time I go somewhere I buy a bunch of records so I can hear things from different places in the world. With those records, I come back to London and spin them and indulge myself and help get inspiration from it. Besides that, you meet so many people and make amazing connections for music stuff which is just brilliant.

Speaking of connections — you’re an independent female artist in music. What are some of the most difficult aspects of being a female singer-songwriter and being an independent artist trying to get your music out there?

It is extremely difficult. It’s a real test of your commitment and strength for you to want to pursue it as an independent artist. Parts of it are amazing — all of the visuals are all me and I love doing that stuff because I’m completely in control. Everything is me and true to what I do. On the other hand, it can be very exhausting because there is a lot to do to put yourself out there all the time. You become your own business in a way because you’re doing the marketing and social stuff, which can be draining but it’s really rewarding once the finished product is there and I know I did a lot of work all by myself with the aid of a huge amount of amazing people that I trust and respect.

When you’re working that closely with people too who are also trying to get their name out there I feel like everyone wants to make the best possible product too, which is an amazing thing.

Yeah, I find it very important to make good connections with people and help people out. I know that there’ll be a time when perhaps I might need a hand with something and people help me out and I can return the favour. You don’t forget when someone helps you out later down the line. Can you tell us a bit about the song ‘Shotgun’ and the inspiration behind it?

My producer / co writer Jagz Kooner and I were listening to a huge amount of Serge Gainsbourg, Jane Birkin and Sylvie Vartan, and lots of other sexy 60s French music. We thought it was super cool and loved the sound, and I’ve always been obsessed with music from my era and Paris at that time. As a bit of a nod to Serge Gainsbourg and what they did with the playful vocals and singing-speaking, which is what I’ve done on that single myself. In terms of where it comes from, it’s about that really dangerous kind of love where you know you shouldn’t be together, but you just don’t care, you’re kind of hooked. It’s almost like a drug and you need another fix. Without sounding too dramatic it’s sometimes the most euphoric love when you really feel it in every way but equally, as you feel it, you know that it’s probably tearing too much of you apart.

I definitely got Bonnie and Clyde/spy vibes from the song and music video.

Yes! Exactly. I made that video myself because quarantine wrecked my original idea when I had a great crew of people, but I didn’t want to not put anything out. I made it on my iPhone, did some very funny videos of myself, found some stock footage and I just made it myself. It does have a few influences, like spy films, Bond, the old Batman cartoon images with words like ‘boom’ and ‘pow’. Russel Argo did the animation and Grigory Grebennikov did the artwork and I love the final version a lot.

You touched on your desire to have a lot of freedom in your work and I can see that in this music video — the visuals are very much reflective of your inspirations and personal style. As an independent artist, how important is it to you to have creative freedom regarding both the music you create and the visuals you release?

It’s really important to me. I can become a little bit critical because I know in my head what I see and sometimes when I’m translating it doesn’t always translate properly. It’s very important that I’m quite involved or I make sure that I am very specific with the style and image and what I’m looking for. It’s why I work with a lot of people I’ve worked with before who I trust as well because there’s nothing worse than being an independent artist and someone making something that’s not you. As you can tell, I’m stuck in the past in the 60s and 70s and I love that old look, but it has to look authentic; not like I’m just playing fancy dress or copying something.

This is the follow-up to your second single ‘Lovers in the Dark’ released back in 2019. How has your creative process when you’re writing and recording changed since then? What have you learned about yourself as an artist since that release?

The reason why it’s been a whole year since I’ve put anything else out is because I had a lot of feelings of not being good enough…I lost a bit of the confidence I once had. I think as an independent artist it can be difficult on your ego. You have to be secure in yourself and believe in what you’re doing. I think I needed a bit of time out to get my head back on and make sure that I was ready to put this music out. I’ve been in this period of polishing up all the songs I’m going to release now and I have another three to put out by January. I’ve been using the time to learn a bit more and grow a bit more confidence. I needed to build myself up and mentally be strong enough.

Have you heard of imposter syndrome before? That sounds like something you were going through.

Yes! Huge. As an artist, you are already quite sensitive and when you feel any sort of knockbacks, you can be self-critical. Sometimes you need to get your strength back and come back ready to kill!

You mentioned a few more songs — what can we expect from those releases? What else is next for you?

Yeah, there’s another two to be released and then I’m aiming to put out an EP on vinyl. That’s always been a dream of mine to have the music on vinyl since I was a kid. It’s a precious thing to make. Until then, I’ll be packaging the last four songs with a couple extra and then we will see what 2021 brings!

Check out the premiere for ‘Shotgun’ below. For more info on Iraina find her on, www.irainamancini.com, Instagram and  Spotify