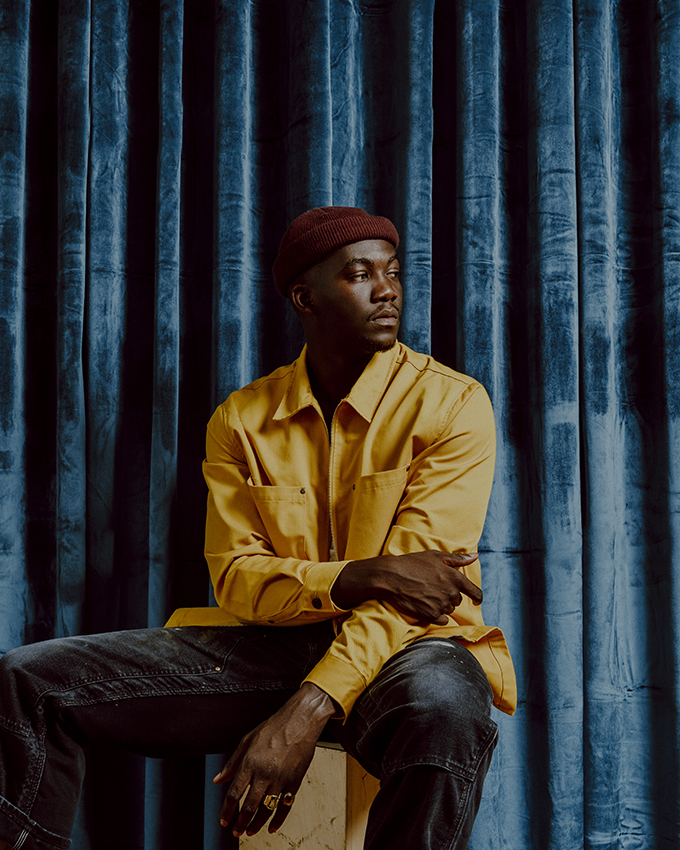 After the release of his highly anticipated trio of EP’s ‘The Monologue’, ‘the Paradox’ and ‘The Guy Who Cried Freedom’ Jacob Banks is finally set to unveil his long-awaited debut album ‘Village’ – a truly stunning and story-telling project which genuinely proves how the singer has matured both sonically and lyrically over the past years.

Next to pleasing us with his releases, the Nigerian born and Birmingham raised artist has had a quite eventful year performing at festivals all over the world including SXSW, Lollapalooza and last but not least, the world’s probably most famous music event Coachella. We were able to catch up with Jacob Banks once more after our previous interview with him in Issue X last year, and discussed his connection with Seinabo Sey, festival crowds in the United States and how he approached his debut album.

So how did life change for you ever since 1883 Magazine interviewed you last year?

How did you become happier?

I’ve just been able to do so many things through success, and being able to do stuff like pay my mum’s mortgage, you know, tick off a couple of things from my list of who I want to be and how I want to be. And apart from that same old Jacob from the block man, just living life and trying to stay happy.

That’s important, definitely. But you’ve also had your Coachella debut this year right? How was that?

Is it as crazy as everybody says?

Yeah, it is, it truly is. It’s a festival, like I would never see that many people in my life, like it’s a sea of people, just constant. I got to see Beyoncé, I saw Beyoncé perform twice. I was ill for the whole time as well, I never get ill but I was ill for the first time in about fifteen years throughout my stay in Coachella, and I had to stay up to see Beyoncé. I saw her both times and I will never see a better show.

Really, was it that good?

Honestly, it’s life changing. I saw her on tour with Jay Z as well the other month, and he was also incredible, but Beyoncé by herself – a spectacle. Like to call it a performance is not even, it’s like it’s an experience, that’s how I would describe it. It’s more than a show, it’s more than someone being able to sing or being able to dance, it’s grand. You know, it was a special thing for me.

Wow, so did you get actually get to meet her in person as well?

No, no, no. I saw her, she was pretty close, but you know I’ve got to keep looking forward. We’ll meet at some point.

Absolutely! Maybe even collaborate, who knows?

Never say never. But you also performed at like Lollapalooza, South by Southwest, like so many US festivals. How are they different to UK festivals different?

At UK festivals the people are usually a lot drunker.

The US audience does more do drugs, while we drink heavily; but same thing man, it’s love everywhere, it’s music, it’s a universal language. Playing festivals this summer in Czech Republic, like all sorts of places, and it’s love. Everyone understands music and it brings everyone together. And it’s always warmth all round.

Do you feel like the US appreciates your music more than in the UK?

No, I think it’s the same. I think the US is a lot bigger, you know its 380 million people. The UK is 60 million people and that’s four countries, so sometimes it feels like it’s a lot more, but percentage-wise it’s probably round about the same. It’s just a lot more people, so there’s a lot more people to please, but here it’s like you only have a few people to choose from and we don’t necessarily have a national radio station in the UK. in America it’s like New York has its own, L.A has its own. But we in the UK we share, like it’s Kiss, Capital, Radio One across all boards, so in the US it’s just bigger.

I keep hearing that the US appreciates Soul music and R&B music much more than the UK, so I see you don’t think so?

I think there’s just more. I think there’s more so there’s enough people for you. So like, there’s enough that their minority is our majority if that makes sense. So say for example Texas alone is four times bigger than the whole of the UK. So if you imagined everyone that likes R&B and Soul here, times that by fifty, everyone will be successful. There’s just not enough people here, there’s not enough of a system. For example there are radio stations in America that only play R&B, but we don’t have that here. It’s kind of like you’re on a playlist with another 10 songs that are all very different. Like there’s enough of an infrastructure there that supports a specific genre, a specific age group, and it’s okay. But like here you have to share, whereas there you don’t necessarily have to.

Fair enough. Let’s speak about your current single with Seinabo Say – obviously you guys collaborated before, what made you do another collaboration with her?

Apart from how fucking incredible she is, I work with people who want to be worked with, if that makes sense. If it ain’t broke why fix it? Like it was a thing like “do you want to do another song together”? And I was like there’s nobody else that I was more excited to work with, nobody else that I felt cared more. And she cared! Like we did her song one day, I sent her that song the next day and she sent it back to me the day after. Like that’s what you want, that’s the kind of energy you want. When something is made with love you want to surround it with people who have love to give you know? So erm, yeah she was just always supportive, so it was like there’s nobody else who I’d want to put this energy into the world with. Yeah.

That’s amazing! So she’s basically your Bonnie in the music industry?

Yeah, I mean she is. You could say that!

So you’ve got your upcoming album ‘Village’ around the corner. I loved how you fused so many different sounds together. But considering it’s your debut album, how did you approach the whole recording process?

I did most of it kind of in between tours, because I’ve been touring so far for like two years, and just chances I would get. As the time went on I started to have an idea of what I wanted to do, which colours I wanted to paint. And it was mainly just being honest with myself with all these things, especially from the point of view of villages, it’s based off the phrase ‘it takes a village to raise a child’, and I wanted to talk about these things that I love. I love Jazz, I love Hip Hop, I love Grime, I love Reggae and I love Dub. I shouldn’t have to choose just one, you know? So yeah it was a lot of being honest with myself and being brave in my decisions even though they might seem a little weird, it’s just, this is what I like, I can’t change that! It’s what I fuck with, and I’m going to put it on record.

What are the key messages or key topics you are trying to portray in the lyrics and the songs generally?

Just to be honest. I think being honest was a massive thing for me. Typically when I write, I write like an outsider to the world, but this one I kind of look at myself and just be honest with myself, and you know, think about what hurts and what doesn’t, and what I hope to be like and what I am currently. Just having an honest conversation with myself and being okay with growth, and being okay to unlearn certain things and learn new things. Yeah, I think that was kind of the general direction.

Did you take inspiration from your personal experiences?

Yeah, definitely. I think all of them I wrote from a very personal place and it was – because I want this album to keep people company, and for me to do that I have to be really honest with myself so people can see bits of themselves in me. I have to be honest.

Love that! What’s your favourite song from the album? Your personal favourite?

I don’t have one!

It probably keeps changing all the time anyway, doesn’t it?

Yeah, but that’s a different kind of favourite. How long did it take you to put the whole album together though? Because some people tell me their debut album takes three years to four years, so it’s always interesting to see like how long a project takes for everyone.

So that’s not even too long is it?

No, not at all. Yeah, gosh, it feels like forever because we’ve been touring so heavy!

But you’ve also got an upcoming tour now right? So now you’re on the road like all the time!

Yeah, I really am.

So what’s your favourite part about making music? Like is it the recording, touring, or what is it? Probably has to be touring.

I think a balance of both. Because I think they help each other. So I write songs and take them out on tour, perform them, and then I go back and record it. Because now I know what it feels like, I mix in them changes from when I’m on tour, so they help each other. I think if you’re in the studio too much you don’t know what it actually feels like to give the songs to the people, and you’ll be guessing, like “oh, maybe it feels alright”, but at the same time if you’re on the road too much you don’t get to create, you don’t get to use everything you’ve learnt. So it’s a balance of both really, I need to be able to do both.

What’s been the most memorable show so far?

They’re all different, but then there’s some that stick out to you. Like we played a live show first of all in Dublin, and that was my favourite show of the summer, just because in my head while I’m on stage I’m Drake! I’m a Hip Hop artist, and that gets the crowd mental. Never really happens much, but it happened in Dublin! They were just rowdy, drunk, off their faces, so I was like… yeah. I felt like a rock star, so I was like, fuck it, this is my fame, this is my favourite show. But they’re all so different, no two shows are the same. It’s always a different set of butterflies every time, something I’m always grateful for.

Thank you very much for speaking to me.

Village is available on November 2nd via Interscope Records. For more info head to www.mrjacobbanks.com