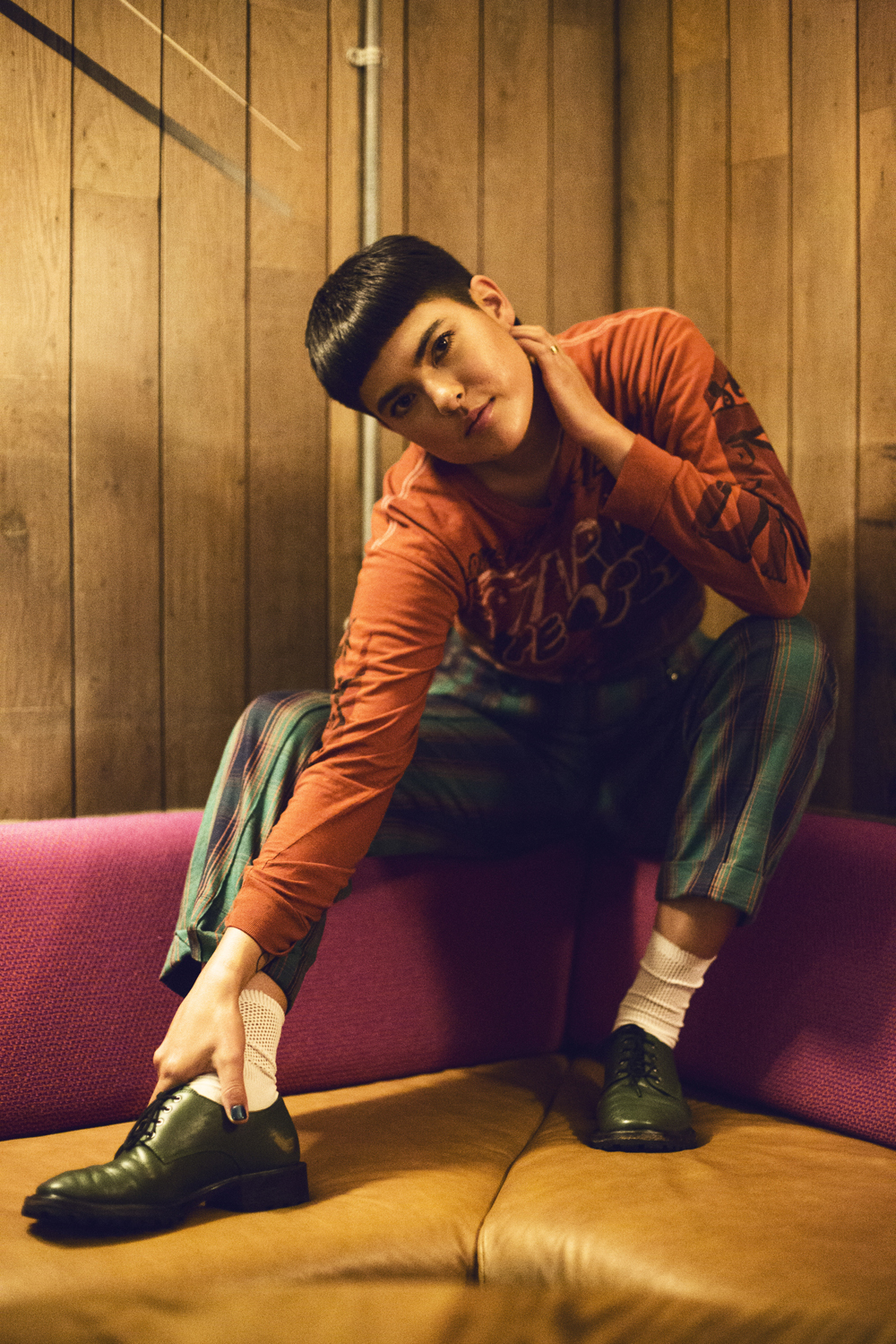 LA based singer-songwriter Miya Folick has been garnering a buzz for the last few years having already released two EP’s to widespread acclaim and touring extensively with artists of the likes of Kate Nash and Yeasayer.

Miya delivers a smorgasboard of delicious synthy soundscapes paired with dreamy vocals that effortlessly soar, flutter and shimmer in mid air, before plunging into a low and guttural growl. Miya’s songs are a call to arms, she invites us to unashamedly snarl, scream with and sing along with her, smile on your face and tears in your eyes.

Her sound is jubilant, defiant, infectiously and unapologetically joyous.Ahead of the highly anticipated release of her debut album, we meet up to talk about tinder matches of the non-romantic but ultimately more useful sort, musical inspirations and the inherent politicalness of a woman screaming on stage. You’re releasing your debut album in October, how are you feeling?

I’m very excited! I’m just excited to start touring and playing new music and see what people think of it. I always like to hear peoples feedback about the songs and seeing people incorporating the songs into their daily life is always really cool.

I read that you used tinder to find your band members?

Yeah I had made songs on my computer by myself but I wanted to play them live and i wanted it to just be immediately satisfying and I thought that easiest way to do that would be with guitarists and a band. I wanted to play live, and I wasn’t really meeting the right people to play with and I realised most people in LA are on tinder so I just made a profile that said ‘looking for a band’..

Did you get any weird tinder requests?

I’ve honestly met a lot of people through tinder that I’ve worked with. It’s an interesting thing as a concept that we have now that we used to not; is that if ur looking for a certain type of person you can go to this app and you can search through people and I think, it’s made for dating but it almost works better for work! I can search and find people who are directors or guitarists. I put the profile up and I forgot about it and i wasn’t really swiping through and then Brian my current  bass player came to a show where I was playing solo and that was that.

Who are your musical influences?

In this album in particular we referenced and talked a lot about Radiohead, The Cranberries and Broadcast. Joni Mitchell is the person that I listen to the most so she’s always an influence. I discovered The Cranberries later in life.. I wasn’t a huge music fan as kid which people find surprising. I love singing, I sing all the time and I feel like I have a tendency to be attracted to more complex melodies and melodies that leap high and go low and are very dynamic. I feel like Joni Mitchell, especially her earlier stuff has super dynamic melodies that go very high and go low and are almost yodel like in how they lilt. I think listening to Dolores and The Cranberries I was attracted to the way she uses her vocal as an instrument, it doesn’t always sound the same and Joni and Bjork do that too. They all grunt or they growl, they squeal, they scream, they sing. And sometimes it’s very pretty and sometimes its very aggressive. Sometimes it’s kind of ugly and I like that.

How has being inspired by vocalists such as Dolores or Joni Mitchell influenced your own art? Can you expand a bit more on the idea why you think this idea of the unbridled female is inherently political?

I think I was made to feel as a kid that I was supposed to harness my anger into something else and never release it as pure anger or pure aggression, and I think people find women who yell and scream obnoxious, like the ‘harpy female’ or hysterical but I think there’s something very innately human in yelling. I remember seeing this play when I was growing up and this woman loses one of her children and I remember the actor yelling out, she didn’t even scream it was like this deep bellow and I remember thinking that it was a truly human sound. I think I’m more interested in that kind of sound than I am interested in putting on a ‘cool’ sounding voice which i think has been very popular in music, especially for women.

Can you tell us a bit about your debut album?

I’ve been wanting to make something like this for awhile and I just feel really lucky that I have the opportunity to do it. I feel like I compulsively make melodies in my head all the time it just felt natural to start making songs and putting the puzzle together.

Finally, can you describe it in one word?

For the latest on Miya visit www.miyafolick.com

Hair and Make Up Lyn Darragh