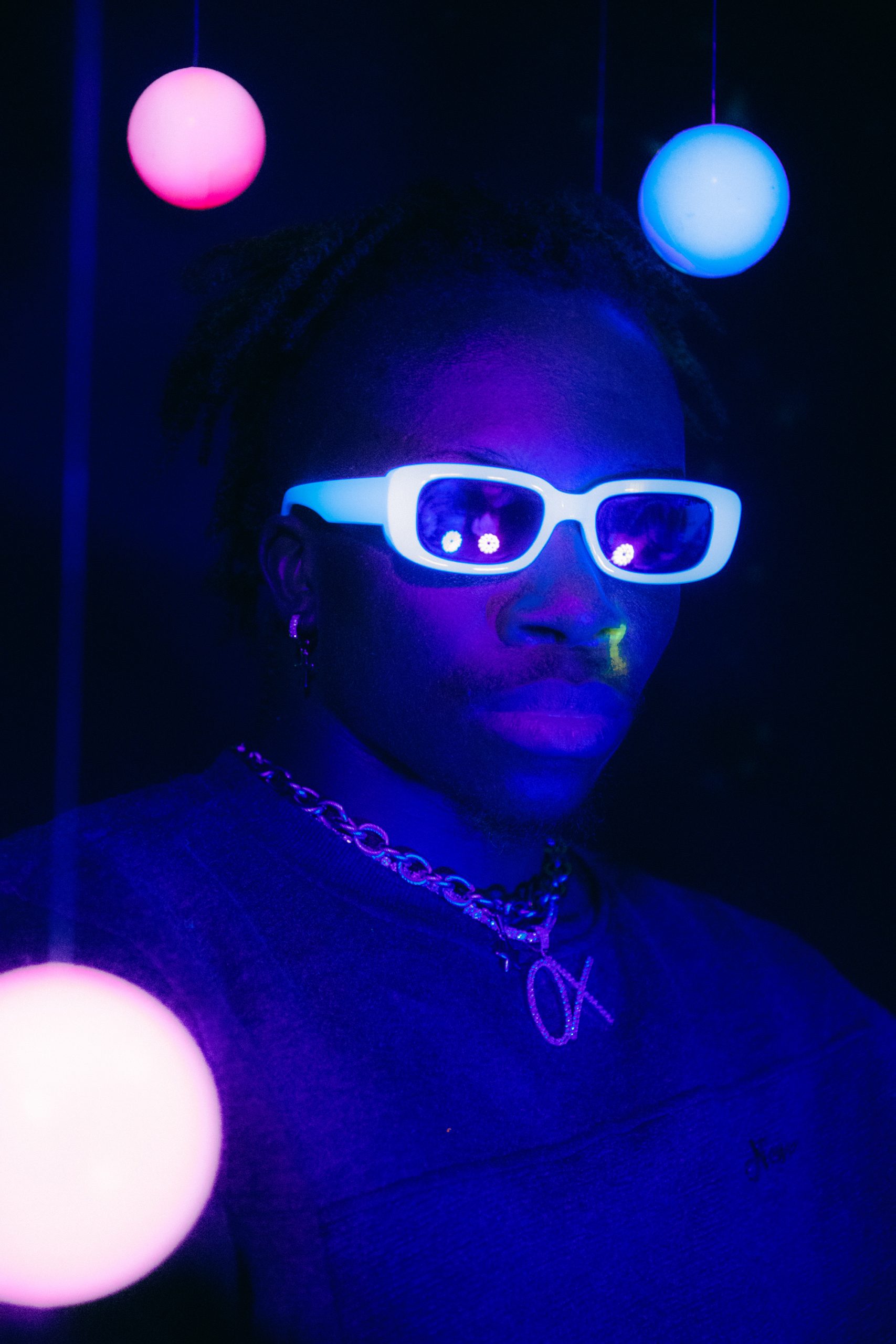 What a time we are currently living in at the moment. Isolation, lockdown, quarantine, whatever you want to call it. Yet one thing is true, music has made it somewhat better or so is the case for me.

Having created an endless number of playlists and explored the depths of Spotify, to still be coming across new music and discovering talent I have never heard of before. I can say that never have I been grateful for the gift and art of music and the joy that it brings me.

The artists creating are having to adapt, re-adjust to creating and making do with the releases that we have gotten pre-quarantine, so we have more time to take in the music and enjoy the offerings. One of the artists that I have stumbled across, thanks to Spotify Discover, is rising Nigerian artist Oxlade. Describing his music as a fusion, as opposed to straight Afrobeats, his is a sound that isn’t one I have necessarily heard before.

Having already graced stages in the UK such as the O2 Academy Islington and London’s O2 Arena as part of Wizkid’s Starboy Fest last year, Oxlade has slowly been growing. And now with his first EP OXYGENE, he is showing people what he is all about.

When we had the opportunity to get Oxlade on the phone, we spoke about making the EP across various places, separating himself from other Afrobeats artists and what his fusion is really about and more. First of all, congratulations on your first EP OXYGENE! Just getting straight into it, what is it about?

Thank you very much. The EP is about a lot of different things. At the time of making it, it was very much a rollercoaster of emotions and different things happening because there were a lot of things going on at that time. I ended a relationship during the time I was making the project, so there is a lot on there which is about heartbreak as well as love songs. However, there are also songs on there about me growing up and where I come from which was very much on the streets of where I am from. There are a lot of different things on there but overall, it’s about my life and where I am now.

The sounds on the EP are very different than what you would typically think of an Afrobeats project. How would you describe it sonically?

I think that Afrobeats is very interesting as a genre and people think that if it’s not upbeat and up-tempo, then it is not Afrobeats. However, I think that something doesn’t necessarily have to be upbeat to be Afrobeats. I personally feel Afrobeats is creating sounds and melodies using African instruments and interpreting them in the way that you can, and people do this in very different ways. For me, my type of sound I prefer to call Afro-Fusion because it has a lot of different sounds than just African music; there’s R&B, a bit of Soul and it is me mixing my knowledge of African music blended with these sounds that are better known from the Western World and, for me, that’s Afro-Fusion. I knew that I was due for a project. I have been putting singles and doing collaborations over the last year and so I knew I needed to give my fans something that was my sound and something that they could have that was not just a single. I started recording, I want to say around last October when I was in London. I worked with a lot of Afrobeats and R&B/Soul producers [which include Spax, Dëra, Lussh] trying to get the sound right and not just rush it. I did a couple of songs in the UK, then I went back to Nigeria did a couple of songs here, then I went to Uganda did a couple of songs there. It’s very much me trying to experiment with different sounds in different places and bring them all together. I feel like it was very much worth it and I was very happy with how it came together in the project.

How was it going to all those places to record and make music, as they are different in terms of the type of music and sounds that they are each known for?

It was something that I was very happy I got to do. The whole process was very organic. Last year, I had my first performance at the O2 Arena through Wizkid and his Starboy Fest and then I also did another show at the O2 Academy in Islington, both of which took place in one month. I had initially gone to London for a songwriting camp, then I got the opportunity to work with other producers. Being in London actually influenced the first song ‘O2’ on the EP which is actually about Oxygen and not necessarily performing at the O2, however, it was very much influenced by being in that space and the people I was with during that time.

Some of the other songs on the EP are definitely based around certain occasions and places and I feel like you can hear it when you listen to them. Like the song ‘HOLD ON’ which was influenced by Ugandan sounds. I feel like the different places I went to actually helped me in my versatility which is what I was wanted to put across on the project. Just by travelling and going to those different places, how did you find the people that you wanted to work with and help you with the project?

Initially, the places I travelled to were not because I wanted to make my EP there; it was also work or something else that got me there. In Uganda, for example, I had a gig and before the gig, there was some time and I felt like I wanted to do something creative and you know how music is when you are in that space of wanting to create something. So, I linked up with some producers and we made some music there. I listen to a lot of Ugandan and East African music in general, so I just tried my best to fuse those sounds together with what I was doing.

Also, the ones in the UK. ‘O2’ is pure R&B and that was influenced by the fact that I had just spoken to my greatest musical influence that day Wande Coal and I was so gassed. His type of music is very R&B and so the song that I felt like doing was kind of respect to him with it being very much R&B. Every song has a story behind it and how I made it.

You have been putting out music for a few years now and with music changing so quickly, what has changed about your music and your process of making music?

I feel like evolution is very important. The way I sounded in 2018 which is when I started doing music professionally is very different to how I sound now. My vocals now are more finessed and are much more refined I would say. The way I pronounce words, diction and everything it’s been a learning curve from the onset to now, and when I listen to my old songs now, I can hear that change and that growth. I give thanks to God for giving me the spirit of never wanting to stay where I am and always wanting to grow. Some people once they find their sound, they stick with it and that’s it. Whereas, I don’t think I will ever have a problem evolving because I always want to try new things and push myself.

As a genre Afrobeats is growing every day and there are artists becoming bigger and more popular, not just on the continent of Africa, but internationally as well. So, I just want to know, in terms of your music, how do you feel you stand out with the new wave and new talent coming up?

Even though I describe my sound as Afro-Fusion, I don’t think people necessarily care… Afrobeats is Afrobeats to anybody as long as the sound is coming from Africa. I am still a representation of Afrobeats and to those that don’t necessarily know the ins and outs, I am still an Afrobeats artist. If somebody was to ask me where I personally see myself going in the next 10 years, I would say that I would want to be the biggest Afrobeats artist. I know it’s quite audacious to say considering I’ve only put out my first EP, but that is the goal that I set for myself and I believe through the help of God and hard work I’ll get there. Where do you want to see your sound and your music going in terms of your impact and what you want that to be?

As an artist, I feel like I make different kinds of music. So, I want to be able to put a smile of people’s faces with my type of music. I get a lot of DMs from people talking about how my music has impacted their lives and so with my music I want to be able to give people that type of feel-good feelings and I want my music to elevate their spirits. I am somebody who is big on spirituality as a Christian. Also, mental health is important to m so I feel like when people listen to me, I want there to be a shift in how they feel in that particular moment. I just want to help out in whatever way I can in this toxic world where there is a lot going on. I want my music to uplift people and I believe with me exploring and experimenting and being the best version of myself, it can work.

Even though this is a very weird time that we are in now and this may seem like an odd question, but what is next for you?

With the release of the EP, I feel like I am just trying to properly give it that push. Now that some people have a sense of what I sound like and what I am about, I would like to get the chance to shoot some videos and let them know who I am in terms of the brand and who Oxlade is. The face, the brand, the aura, the energy, everything. I want to do more visuals, more video documentaries showing more sides of me than just music and yeah just carry on going.

Check out Oxlade’s debut EP OXYGENE and latest music video for ‘AWAY’ below!