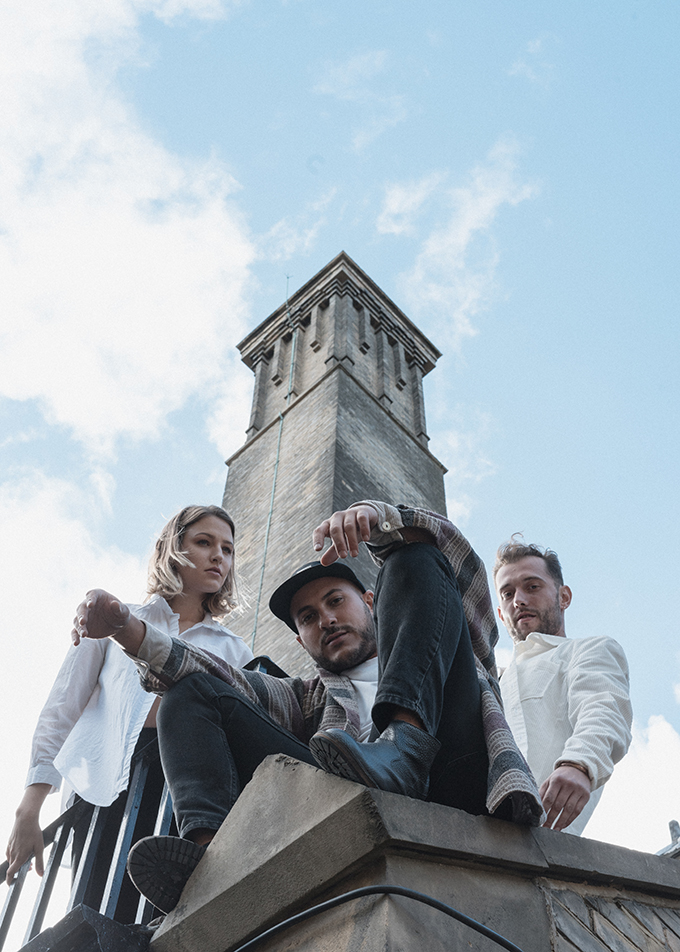 Introducing a new band for your February ‘Power Down Playlist:’ the electronic, soulful group Rumours. The trio from South London is made up of Italian friends Mark and Fede, along with Norwegian vocalist Marion.

The band first came together in 2015 whilst studying together at Tech Music School in London.

The music students have lived and breathed every moment of the band since the very beginning: quite literally, by creating a studio in the house where they all lived .This immersion seemed to pay off, as the group fermented their own hypnotic sound of electronic chords and dreamy instrumental mixes.

I caught up with Producer  and drum player of the band Fede, following the October release of their new single Edges.

How would you describe your sound to those who are yet to discover Rumours?

Fede: “That’s always a tough one. It’s a mix of influences: I like heavy electronic music, and we have a lot of heavy beats in our music yet with structure, that’s important. We also have a lot of soul, that’s mainly Mark’s background.”

Italian born and raised neighbours from Reggio Emilia, a town in the North of Italy, Mark and Fede have been friends since they were children. Having already worked together musically for some time, they decided to start a project. With Fede taking reins on the drums and Mark producing smooth, low tones, the pair were in search of a third member: a female vocalist.

F: “We initially met Marian at a party whilst at University. That’s where it all started.”

From then on, the band progressed quickly and released their first single just a year and a half later: ‘I Do it Again.’

In the  beginning, Fede was sceptical about how well the group would mesh, with each member having such varied musical taste due to their contrasting backgrounds.

“When there are so many different ideas being placed together in a song, it can sometimes be too much. But now we’re really finding our sound. We’re happy with what we’ve been producing.”

As the triad lived together for a year, they used it to their advantage by creating a home studio in their flat.

F: “It was cool. Of course, it can sometimes be overwhelming: rehearsing, writing, producing and living together, but I think we were good at it. There’s always ups and downs in relationships and friendships, but it worked well for our music.”

Their new single Edges was recently released in October 2018 and was picked up by New Music Friday UK on Spotify.

F: “We weren’t actually sure if we were going to release this song, it has a very slow pace and tempo. When we played it after a gig, there was a director in the room who loved the sound and really wanted to direct the music video for it. So, we said yes and decided to release it. We love the video and we’ve had really good feedback from it.”

How does the music process work for the three of you: does someone take rein in song writing, for example?

F: “Mark writes all the lyrics, chords, melody and tune, beginning the entire process with this initial idea. Then, he comes to me and we produce it a little bit. Following this, Marian comes in with her approach, that is very different from either or ours. It works well for her to come into the song slightly later, as she normally has a different approach to how the song should go.”

What’s your favourite aspect to the entire musical process?

F: “I play drums and produce. My favourite part is definitely producing. I love programming and sampling, and production in general. I also like the drums, I like making the beats. Me and Mark complement each other well in terms of what we specialise in.”

Having already played at the 2017 Dimensions festival in Croatia, their first major festival, the group hopes to appear at more festivals in 2019.

F: “It’s not easy for us, as we don’t have a booking agent we’re independent. We’re trying to look at new options in the new year, but as an independent artist it’s always tricky to get in with festivals. But we’ll definitely be touring or performing next year.”

F: “The plan is to release new music, and a lot of it. Our problem in the past has been keeping the momentum, as an independent band. We now have a manager which we’ve never had before, who is helping us make plans for next year which is really helpful.”

With the release of another single later this month, the band are looking for a support slot that will allow them to go on tour later this year, followed by some festivals for the summer.