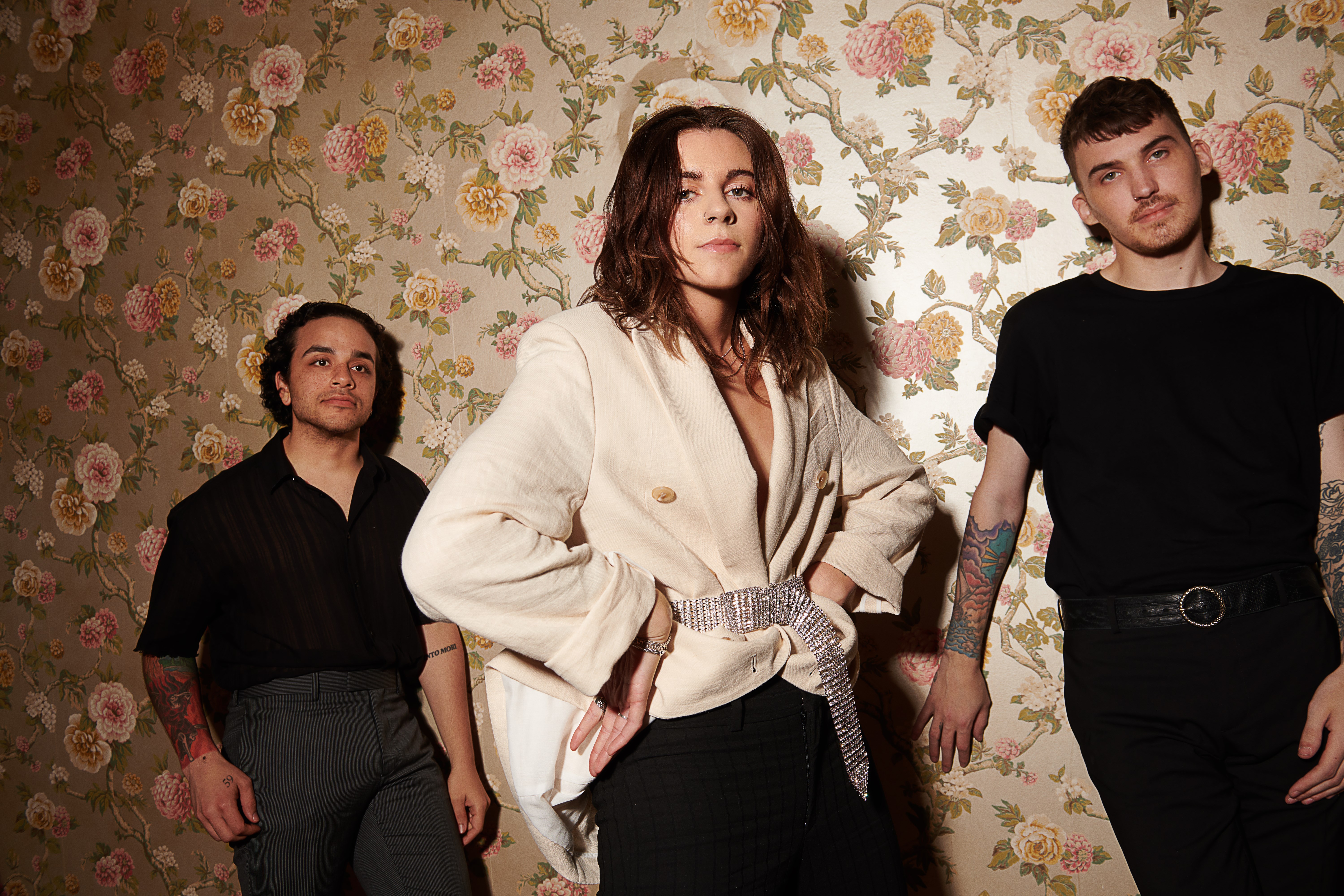 For a band that is always ready to embrace change and blur the lines, the next chapter for PVRIS sounds and looks like a pop/rock cult-inspired dreamscape.

It’s not every day you hear the words “Don’t worry, it wasn’t a cult!” in an interview but I feel like it’s a normal thing to hear from PVRIS lead singer, Lynn Gunn. Gunn, along with her bandmates Alex Babinski and Brian MacDonald, have always pushed the boundaries and blurred the lines in the band’s sound by exploring different avenues, influences, and inspirations for their lyrics. Hallucinations, the band’s latest release, follows their lead single Death of Me. Both songs and videos show the band facing different occult-inspired ideas and navigating environments where the supernatural exists and flourish. These themes, Gunn says, are “dangerous, seductive and a product of persuasion,” and also could mimic the anxieties that occur when we pursue love and relationships.

While on their way to England to prepare for the band’s upcoming gigs at Reading and Leeds festivals next weekend, 1883 Magazine had a chat with Gunn about the band’s growth over the past few years, where the cult-inspired imagery came from, and the safe space the band has created for their LGBTQ fans at their gigs. Congrats on the new songs, the upcoming album, and signing with Warner! How does it feel to finally release new music after some time away?

It feels great! It’s been a very transformational, fast-paced and busy year and took a lot to get to this point, so we’re happy to be here finally releasing music and seeing the efforts of this last year finally manifested into something tangible. A lot of this last year felt like we were floating in the dark so it feels good to be on the other side.

Your upcoming album will be your third. How do you think your band has grown and changed in the years since your first album release in 2014?

I think 5 years can change so much in general…add being on the road, traveling the world, and experiencing the things we have in that span of time, it sometimes feels like it’s expedited that or tripled that growth in a way. This last year was a big year of switching things up internally as far as our team and collaborators and it feels like we’ve really figured out our system of work/creative flow. And importantly, our own ways of staying connected with each other while also allowing space for us to grow individually.

I know for me personally, there feels like there is a lot less pressure on what we’re doing but everything feels lighter and much more open… there are many roads to take now. It’s a bit ironic considering the elevated team/label with Warner and new goals we’ve set, but I hope that by eliminating the pressure and replacing it with pure excitement can be what makes those goals all the more achievable. We really do love what we do and the people we work with, I strongly believe great things can happen when you combine that along with right timing, persistence & constancy.

I really enjoyed your response to people who said your song Death of Me was “too pop.” When writing and recording, do you think about sticking to a certain ‘sound’ or do you just do what feels right?

I feel like that post got a bit out of hand. I think a lot of people thought I was actually upset about those opinions, but I honestly just found the humor and irony due to the fact that I think the music is only going to get “poppier”, although I feel we’ve always had a lot of pop elements in the first place. We always just do what feels right, I really try to follow my gut with everything. If something feels off or forced, I never want to push it. We genuinely just want to create and write music that we want to listen to/wish existed. That’s been our intention since day one, that will remain our intention until the end.

When you’re recording are you ever thinking about those people who, in a way, are a bit close-minded and aren’t ready for musicians to change and adapt as they grow and their sound changes with them?

I try my best not to worry about that. If people aren’t ready to grow with us, that’s okay. But we’re going to keep moving onward and upward however feels best to us. Whatever people resonate with this stage of our career, are the people that are meant to resonate. I think it’ll sort naturally so I try not to stress about it. I genuinely feel when you follow your instincts and do what feels true to you, the right people will support it. I’ve been shocked at the positive reception and love regarding the new sound so far, I feel so grateful for that. You mentioned to those people that “the next song slaps even harder” and the song you were referencing is Hallucinations, which is released today! What’s the inspiration behind the song?

My Twitter really paints me to be a poet, doesn’t it! [Laughs] I received a book from a fan, it was actually just called Hallucinations… I was in the middle of reading that when we first started the song. Around the same time, I also read a book called The Cosmic Serpent, it explores an anthropologist’s theory on the parallels between DNA/molecular biology and mysticism/shamanism/hallucinations, sounds crazy I know, but it’s quite fascinating. I’ve always believed that the science and supernatural coexist together in the same space, or better yet are the same things, we just haven’t connected the dots yet… the theories and studies behind hallucinations kind of fit into that mindset… Some believe that hallucinations are simply your brain creating something that’s not there but one could also argue that your brain is being altered/given the proper access to reveal something that really IS there, in some form or another… that’s mainly what inspired a song about hallucinations.

I saw you sent Hallucinations on vinyl to some lucky fans, which is a really cool and personal touch. What made you want to do this? What has the response been like?

We wanted to find a fun way to give our fans the first listen and reach them as directly as we could, what better way than actually sending them the actual song with something special and tangible? We also hoped that limiting the amount sent out would motivate our fans to connect with each other from all over and team up together to be able to share it and hear it.

Both Death to Me and Hallucinations are quite dark and reference the supernatural to an extent. What are some major themes that occur throughout the album? Did anything, in particular, inspire your upcoming record as a whole?

To be honest, a lot of the themes are still being explored, references to the occult/supernatural are definitely present but I’m still exploring the other themes layered in… so much has happened this year that has yet to be unpacked and tapped into, and I think it would make some pretty great stories and something a lot of people could connect to, it’s just finding the right way to deliver those messages and stories in a fashion that makes sense. The video for Death to Me is very mysterious and cult-like. What was the inspiration behind the video?

Cults are often quite notorious for being dangerous, seductive and a product of persuasion and manipulation by whichever leader. Death of Me is about a person and situation I was pursuing a while back—don’t worry it wasn’t a cult! I felt like I was open and vulnerable enough for them to really be able to alter me/persuade me or completely break my heart, which is dangerous. I was fully ready for whichever direction that risk could take. That imagery and setting felt like it belonged with the song. There’s also been a lot of great cult documentaries out lately that have definitely grabbed my attention, the new-age West coast cult vibes, in particular, felt very suiting as a lot of my time has been spent out west this last year.

The tour this fall is going to be really intimate; why did you decide to have smaller shows and what can fans expect from your upcoming shows?

Lots of sweat and lots of fun! We’re still brainstorming ways to make the shows special and feel extra connected/intimate. We really want to spend the next year reconnecting with our core fans while rebuilding and introducing this next chapter of our band, we’re hoping these shows will be a special moment for our fans to remember in the future.

You’ve been quite open about your anxiety and I know you’re a huge advocate for the LGBTQ community; I read your impactful letter for Gay Pride Month for Billboard in 2017 in which you mentioned your fanbase as a safe space. Do you feel like the space you’ve created for your fans through your music has also helped you in a way to be more open and vulnerable about your own experiences?

In some ways, yes. It’s still very hard for me to be fully vulnerable/exposed on my end of things. I feel like as emotionally revealing and telling a lot of our music can be, there are many other parts to myself that have felt sacred or in need of protection. I’ve seen the way people can run off with the smallest bits of myself and amplify them into something that’s not necessarily even accurate or anything actually close to my true self, so sometimes it feels like no one actually has an accurate and up-to-date perception of me and sometimes that can feel a bit disorienting/frustrating. Because of that fear, I sometimes feel a bit stuck as far as deciding how much of myself I want to share and how much should be kept in my private life. However, I’ve noticed whenever I do speak my truth and outwardly own certain parts of myself, things frequently feel lighter and more connected. I believe there is immense power in vulnerability, it’s just a constant trial and error of finding that perfect balance for me.

What else is coming up?

Listen here to Hallucinations & check out the music video for the track below!

PVRIS’ new EP is out on October 25th. Their third full-length album will be released early 2020. 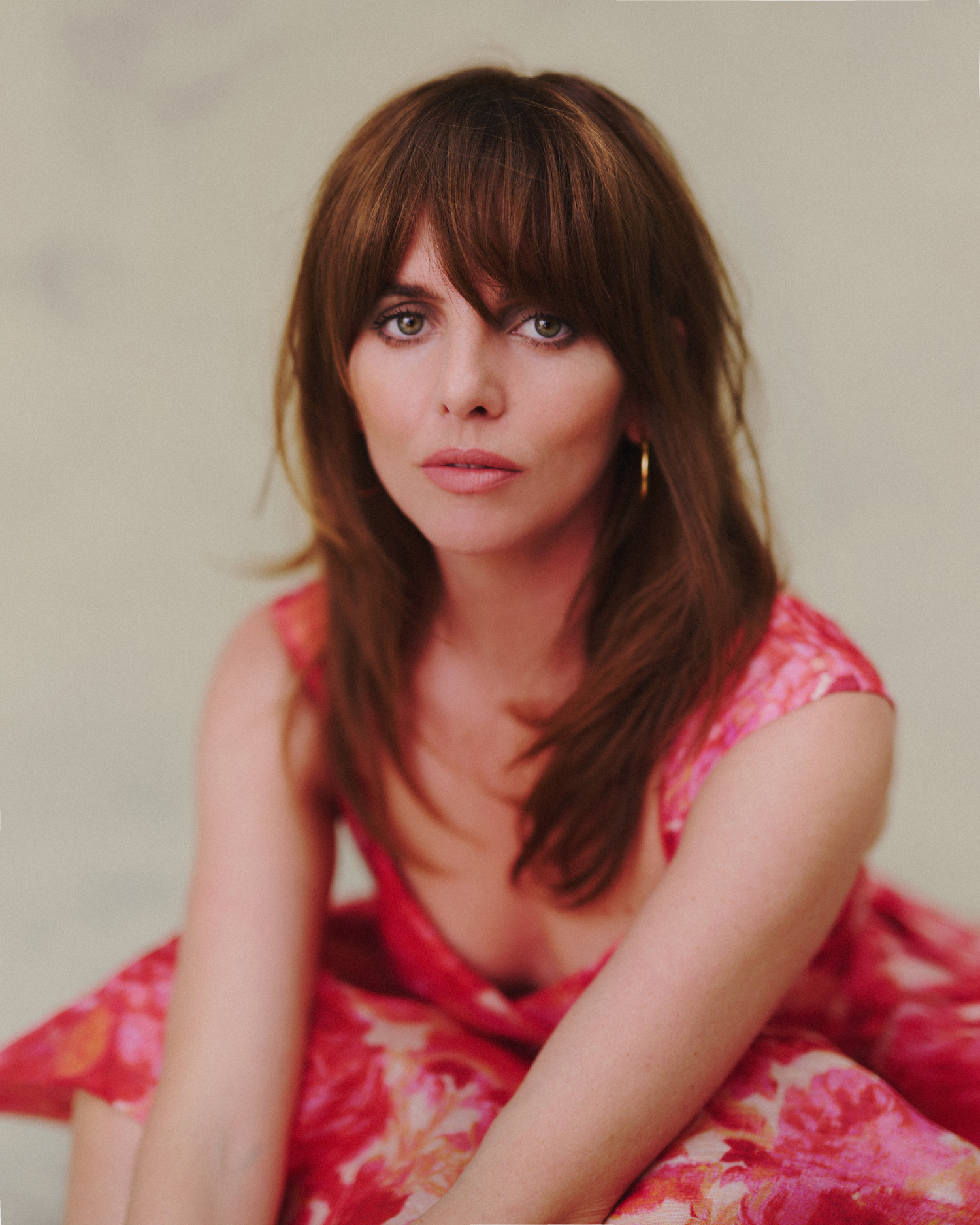 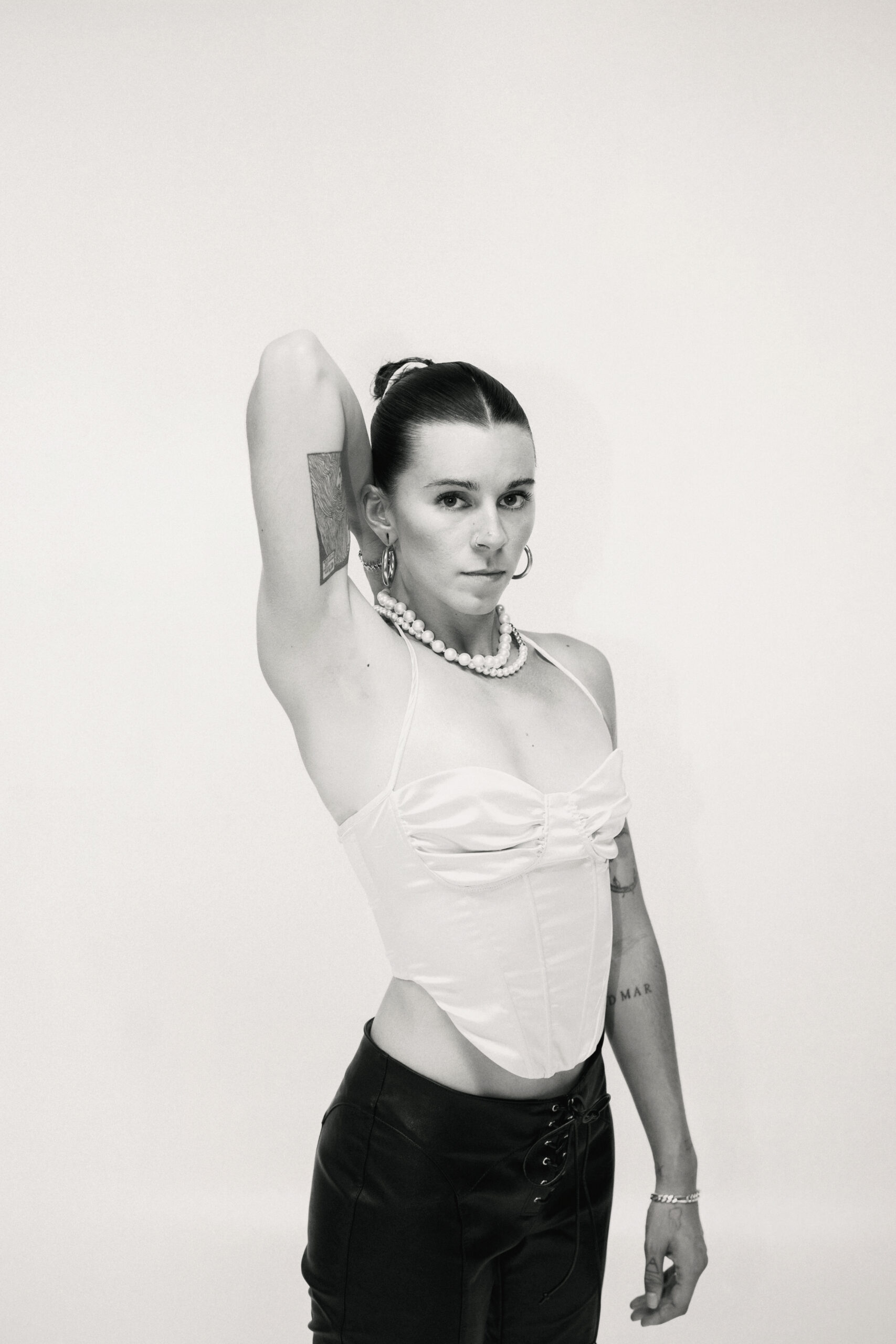 PVRIS’s Lyndsey Gunnulfsen marks her anticipated return and continues her trailblazing streak with the release of brand new singles, Anywhere But Here and Animal. Since 2014 the producer, singer-songwriter and multi-instrumentalist has built a career full