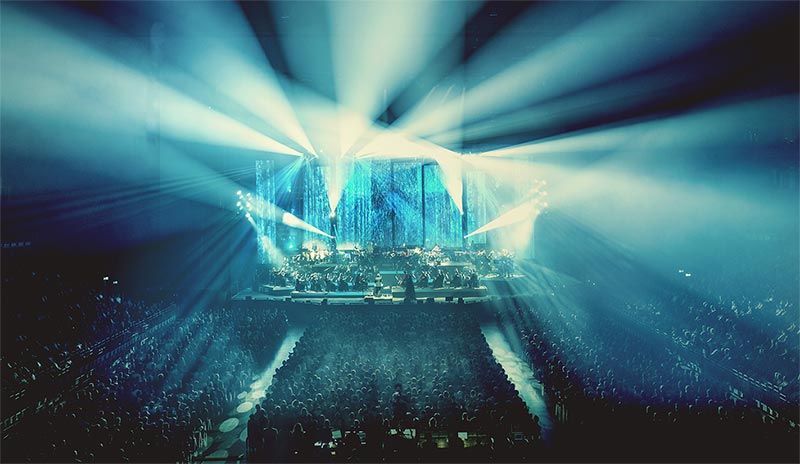 The World of Hans Zimmer

The Lion King, Gladiator, The Dark Knight, Inception, 12 Years a Slave. All brilliantly iconic movies, but what do they have in common? German-born musical marvel and composer – Hans Zimmer.

Those who know, know. But for those that don’t, get to know. And the commonalities don’t end there… In 2019, the magic of Hans Zimmer embarks on a European tour, and who better to conduct the iconic show than Zimmer’s right-hand-man, donned ‘the best ears in the business’, Gavin Greenaway. We caught up with the Trinity College of Music graduate about his musical journey so far, getting to know Hans and his iconic career moments. Tell us a bit about your early life, and how you got into music?

I’m actually had a very privileged start in the music business. My father was a song writer and record producer in the late 60’s, working with bands such as Blue Mink, The Original Brotherhood of Man, and he was in a duo called David and Jonathan. He was pretty successful as a songwriter in the early 70’s. I used to hang out with him and sit in on his sessions when he was producing. He wanted me to have piano lessons because he wasn’t really musically trained, so I was encouraged to. He used to sit with me and I learnt this discipline of practising which stayed with me forever.

How did your relationship with Hans Zimmer begin?

I met Hans when I was about 14, on a session, when he was about 20 years old – he was right at the cutting edge of music production, so my father bought me a synthesiser and Hans showed me how to programme it! I didn’t see much of Hans for quite a while after that, but when I left college, we had the same agent at Air-Edel Associates, and my father was with them too. I got a call from Maggie, our agent (who still works there!), and she said “Hans was in the middle of writing something for Colgate toothpaste, but he’s had to go to Los Angeles for a movie (which turned out to be Rain Man)”. So I turned up at the studio to help out and finish this one minute long jingle. I was played what Hans had created so far and I thought “It’s finished… I’m not sure what else I can do, this is going to be the easiest job in the world”, but then from 30 seconds onwards it was totally silent! I had to pick up on his brainchild and finish it off, so I kind of got to know the inner workings of his brain which was great. What can we expect from the tour?

Well Lisa Gerrard, who sung the original music in the movie Gladiator is on this tour. During one of the songs in her performance, she hits a particular note which really gets me to my inner core. I wasn’t ready for it when we first started performing, and after she’d finished, I literally couldn’t move my mouth properly. It really affected me, it’s just so powerful and it’s personal to me.

Tell us a bit about writing movie soundtracks.

When I’m composing and writing I think about stories and visual. The idea of using music to tell a story is as old as time, music takes you on a journey. If you listen to pure music like Bach or Beethoven, it can sometimes be hard to get into because it’s so pure. Whereas if you listen to more programmed music, like film music, it really can affect your mood. Sometimes the music in a film is an enhancement of the mood, and Hans does that unbelievable well, that’s why his music so good. Because if you take away the picture, you still have this emotional construct that doesn’t need the picture, and when you put it with the picture, it’s fantastic still! What is it about Hans’ music that’s unique and different?

He’s just got a definitive style and it gets copied because it’s so good. With every movie, he reinvents himself. If you listen to ‘As Good As It Gets’, or ‘Rain Man’, they’re totally different! His score for ‘Thin Red Line’ shows simplicity but maximum impact. Hans is so good at telling stories, because he understands them. Directors love working with him because he will help them understand the story they’re making. He thinks like a director and a writer, and he’s able to understand character in a way that many people can’t do.

You’ve been called ‘the best ears in the business’, and Hans has said he trusts you more than he trusts himself! How does that make you feel?

Very worried haha! Like so many musicians, I have a bit of imposter syndrome. Anyone who’s good probably has a bit of it! But it’s this self-doubt which makes you better and it’s part of being an artist. We had a rehearsal before the Krakow show, and about 20 minutes in I was thinking “I don’t think I’m any good at this, it’s just not working… I can’t do this”. But of course, I have no option – I must do it. It just wasn’t sounding right, and I was worried. But after a couple of hours of rehearsal, everybody got a bit more comfortable and it started sounding better. At that point, I wasn’t thinking “I did this”, but there was a sigh of relief, and you realise what a team effort it is. You can’t do it without everybody, you all depend on each other.

How does it feel when you finally see others enjoy the music you’ve created or conducted?

That’s what’s so amazing about live shows – getting feedback from the audience. You can feel how the audience react by how attentive they are and what noises they’re making – it’s not a conscious thing. And you get to find out whether the creative decisions that you’ve made really work. You’ve heard the music so many times yourself, in a kind of vacuum, and you don’t really know whether it’s worked until it’s out there. And for me, that feedback is what makes it worthwhile because that’s what you’re trying to do – connect with people. What advice would you give to someone pursuing a music career?

How do you define success? You could define success as being Hans. Or you could define it as playing an instrument in an amateur orchestra or a band, in a way that fills your heart. And if it does that, that is worth more than living in LA and writing for movies. If you aspire to do music as a profession, you must be prepared to not only be a musician, but also a businessman or businesswoman. First of all, you study like crazy. Then you practise every day, you seek out different teachers, you seek out different things that scare you musically. Work work work, and then connect. Put things online and make a name for yourself, something individual that is you. Don’t copy anyone else, do your own thing. I think ultimately, the way to make it is through originality.

What’s been the best moment of your music career?

It was October 1999 and I’d done the fireworks music for Epcot. It was the first time the parade had ran and there were these huge puppets designed by Michael Curry. I stood and watched people start to respond, and dance along behind the parade to the music. In a way, until then, music had been quite an internal thing for me, and not about reaching people. But this was connecting with people immediately in a way you can only see if you watch it happen. And later that day I was passing a record store in the theme park, and the CD was number 1 in the store within the first two days because it was really connecting with people. It’s been downhill since then haha!