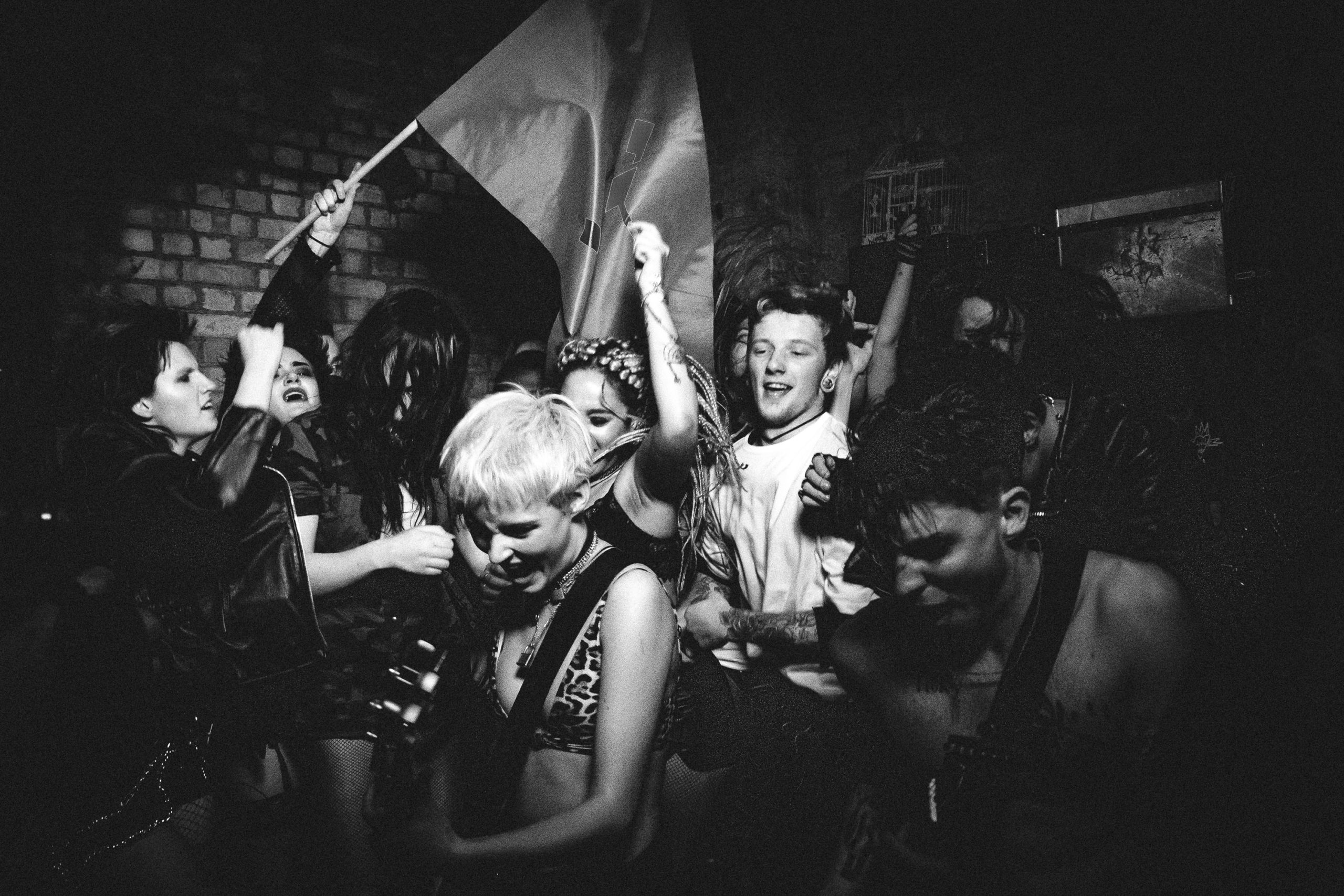 Irish/British punk-metal newcomers WARGASM like to scream a lot — and soon enough, you might be straining your voice along with them, too.

Made up of former Dead! guitarist Sam Matlock and Nevs Models’ Milkie Way to complete the gasm, the Irish/British duo’s latest cover of N.ER.D’s ‘Lapdance’ arrives today along with exclusive BTS images and a stomping music video that involves a party at the end of the world, adding to a budding discography that already includes cheeky references to the Kardashians, Big Brother-esque birds, virtual reality gear; and of course, lots and lots of gritty riffs.

Letting their voices rest for a few moments, we chat with the band over email to get their take on lap dances, and just how soon the world really is from ending. This is surely by far, the angriest offer for a lap dance…

Milk:  We take a lot of influence from that early ’00s Nu metal sound. Rap and Hip Hop had a huge influence on that so this song was a no brainer. We had to pay homage.

Sam:  This is the WARGASM way; it’s aggressive, abrasive and has an element of sleaze and sex. The content was already brilliant; we just did our thing.

Were you two playing with any other covers to accompany your first music video, or was ‘Lapdance’ always seated within… your laps?

Sam:  Well, last New Years [2018-19] I was at a bar with some friends in North London, Camden, and the DJ stuck ‘Lapdance’ on during her Rock set and it just opened a lot of doors for me. The attitude of the track was more on-brand for what Milkie and I wanted to create than anything we had written so far. I called Milkie and she came straight over, we had a few drinks, then we demo’d it to learn our dynamic together. That’s when the flood gates opened for our own ideas to take shape — the cover was never meant to be released. It’s odd how well someones else’s song can convey a different project’s vibe, even over a decade apart. It just works.

Milk:  There are some very cocky, common themes in Rap. It has a very self-important persona — in a good way. These days everyone is so focussed on being nice but you need to realise that if you’re good, you’re good. Use that energy to explore and excite yourself and others. It feels as though everyone in rock music needs some more self-belief. Milk:  It had to be sexy, sweaty, chaotic, and post-apocalyptic. There were influences from dystopian Sci-Fi films like Blade Runner, but also from artists like The Prodigy; they were an act that appealed to everyone and their videos have that incredible mob mentality. They made exclusive feel inclusive.

Sam:  Although I was too young to remember Christina’s [Aguilera] ‘Dirrty’ being released when I was growing up, I was always interested in why all the rock band’s videos lacked the attitude and atmosphere of that video. It was a huge influence on us.

Milk:  On the other hand, I just wanted it to be like ‘Duality’ by Slipknot, but with more ladies — I always remember that as one of the seminal music videos of my childhood.

How soon do you think that scene is to resembling the now?

Sam:  Sadly probably not that far off, although an apocalypse might remove some of the trivialities we worry about in our everyday lives. I think WARGASM would fair quite well in the Thunderdome.

Milk:  It’s very clear that lots of us feel like everything’s going to shit, and whether it is or isn’t, the subconscious can’t help but draw a parallel. It’s always good to be prepared, just in case. I feel like I’ve watched enough post-apocalyptic survival movies that I think I’d last at least a few weeks. Sam:  Imagery and fashion within music is such a big deal for us, and it feels like since Bowie, glam and punk started sliding away; we’ve lost some of that beautiful relationship. This is only our first exploration into what we can do in the visual world — who knows what we can fuck with next.

Milk:  We’ve got an original coming out alongside this single; it’s a combination of elements from dance tracks, Punk and EDM with a thrash-metal-by-numbers breakdown. It shows this sound can go fucking anywhere next. If we can turn a rap song into this? Then WARGASM has no limit.